Atalanta shows off European credentials with draw at Juve 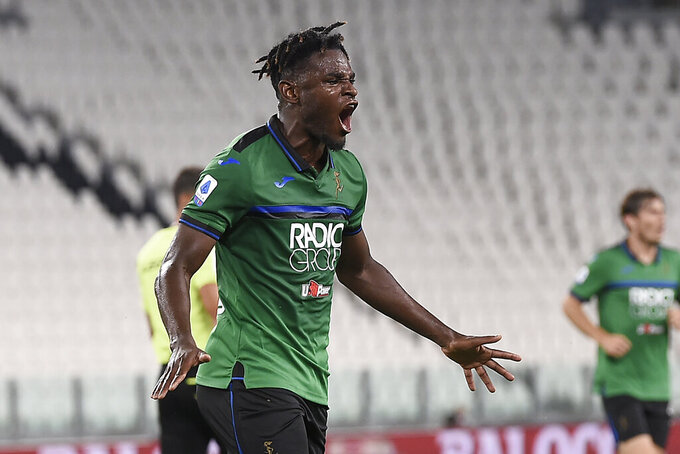 Atalanta 's Duván Zapata celebrates after scoring during the Serie A soccer match between Juventus and Atalanta at the Allianz Stadium in Turin, Italy, Saturday, July 11, 2020. (Fabio Ferrari/LaPresse via AP)

ROME (AP) — The little squad from Bergamo can play with the big boys.

If anyone still doubted Atalanta’s credentials in Serie A or the Champions League, a 2-2 draw at eight-time defending Italian champion Juventus on Saturday showed just how competitive “the Dea” can be.

Juventus needed two penalties from Cristiano Ronaldo -- including a 90th-minute equalizer -- to prevent Atalanta from winning its 12th straight match in all competitions.

“We faced the team that has the best form in Europe right now,” Juventus coach Maurizio Sarri said. “Playing against Atalanta is an enormous problem right now -- not just for us but for everyone.”

Duván Zapata gave Atalanta an early lead before Ronaldo equalized for the first time after the break. Then second-half substitute Ruslan Malinovskyi scored 10 minutes from time to set up a late assault from Juventus.

“We wanted to see where we were at, because we’re going to be facing teams like this in the Champions League,” Atalanta coach Gian Piero Gasperini said. “We were able to do everything we intended to do.”

Still, Juventus stretched its lead over second-placed Lazio to eight points. Although with six rounds remaining, third-placed Atalanta -- which is one point further back -- might be the Bianconeri’s biggest challenger.

Motivated to play for Bergamo, which has had more than 6,000 deaths from the coronavirus, Atalanta is shaping up as a dangerous opponent for Paris Saint-Germain in the Champions League quarterfinals.

The highest-scoring team in Italy threatened from the start and Zapata completed a give-and-go with Alejandro “Papu” Gómez before firing in a low shot for his 15th goal of the season.

A handball from Marten de Roon led to Ronaldo’s first penalty, then Atalanta had more chances before Malinovskyi drilled in a powerful shot from the edge of the area after being set up by fellow substitute Luis Muriel.

Muriel, however, was whistled for a handball to set up Ronaldo’s second penalty and, just like the first one, the five-time Ballon d’Or winner converted his spot kick into the left corner of the net.

With 28 goals in 28 games, Ronaldo moved within one score of Lazio’s Ciro Immobile atop the league scoring chart.

“We knew that if we didn’t move the ball quickly, with one or two touches, we would struggle against Atalanta," Juventus defender Leonardo Bonucci said. “They were so fired up and we struggled at the start, but kept our heads and waited for the right chance.”

“The interpretation of the rule is not the same here as elsewhere. Other countries don’t give penalties like that,” Gasperini said. “But these are the rules here, so fine.”

Lazio’s once-promising bid for a first Serie A title in two decades has been decimated during the restart.

The Roman squad conceded a stoppage-time winner in losing to Sassuolo 2-1 at home for its third straight defeat.

Entering the restart, Lazio trailed Juventus by only one point.

Inside a scorching Stadio Olimpico, Francesco Caputo nodded in the winner for his 16th goal of the season, sending Sassuolo to its fourth straight victory. The Emilia-Romagna squad has lost only once in the restart -- to Atalanta — and is starting to move into contention for a Europa League spot in eighth place.

Luis Alberto gave Lazio an early lead with a deflected shot before Giacomo Raspadori equalized after the break with his first Serie A goal.

Parma announced that a non-playing member of the team tested positive for the coronavirus.

Parma said the person was without symptoms and was being isolated. Every other team member tested negative but the squad was being kept under observation at the club’s training center.

According to the league’s virus protocol, Parma can still play its home game against Bologna on Sunday.