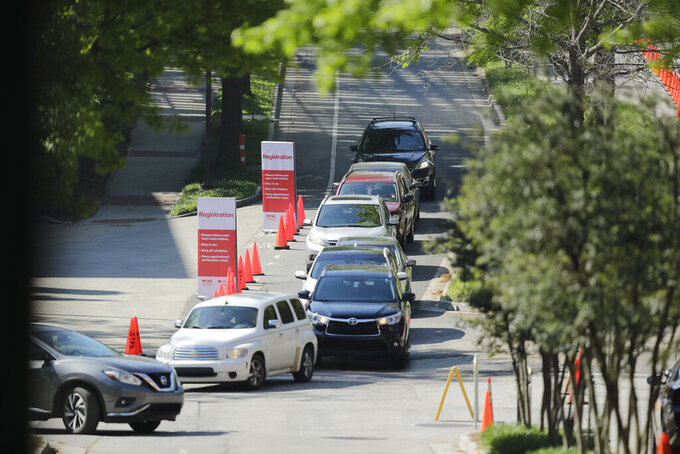 ATLANTA (AP) — Georgia motorists were told to keep their windows rolled up as their cars lined up at a mass drive-thru testing site for COVID-19 that opened Monday in a parking deck at the Georgia Institute of Technology.

The state is partnering with CVS Health to set up rapid testing that can accommodate multiple lanes of cars simultaneously on Georgia Tech’s campus in midtown Atlanta, Gov. Brian Kemp announced.

Dozens of drivers pressed their photo IDs and cellphones to their car windows to show their appointment confirmations. Cars were then directed to a testing area.

“Increased access to rapid testing remains one of our top priorities in order to identify more cases, get Georgians the care they need, and prevent further infection in our communities,” Kemp said.

Georgia has recorded more than 200 deaths and more than 1,300 hospitalizations. The state's total confirmed infections exceed 7,000 and Fulton County, home to the city of Atlanta, leads the state with nearly 1,000 cases.

At full capacity, the site will be able to conduct up to 1,000 tests per day.

“It will help us get a better sense of how widespread the virus is in the community," said Dr. Marybeth Sexton, an infectious disease expert at the Emory University School of Medicine.

Emmanuel Kolady, senior vice president at CVS Health, said the company was eager to help in the public health crisis.

“Look, we’re one of the largest health care companies in the country and we believe we play an important role in dealing with this pandemic and we believe it’s our duty to step up and assist the local, state and the federal government in providing solutions," Kolady said.

Patients must pre-register in advance for a same-day appointment online at www.CVS.com/minuteclinic/covid-19-testing.

For most people, the new coronavirus causes mild or moderate symptoms. For some, especially older adults and people with existing health problems, it can cause severe and even life-threatening illness.

“Patrols are vigilant so people can get fresh air and exercise while following social distancing rules,” the governor tweeted.

At his daily news conference on the pandemic, Trump was asked about Kemp's actions.

Trump said Kemp has done a good job as governor: “He knows what he’s doing, we’ll have to take a look. It really does depend on, you know, how crowded it may be. But I will talk to him and I will ask him that question I would ask him. Yeah, please.”

Earlier Monday, in hard-hit Dougherty County, officials said they were seeing some glimmer of optimism. The number of coronavirus tests conducted at a drive-thru site at Phoebe Putney Memorial Hospital in Albany was just 46 on Sunday, a sharp drop for a site that had been taking 150 or more test samples daily, said Chris Cohilas, chairman of the Dougherty County Commission.

“I don’t know yet if that is statistically remarkable,” Cohilas said at a news conference. “But to me as a person who is looking at these numbers each and every day ... for us to experience a day where we only tested 46 yesterday; that’s encouraging.”

Scott Steiner, CEO of Phoebe Putney Health System, said the Albany hospital Monday had 136 patients with COVID-19 or presumed infected, and that all intensive care beds at the hospital remained full. But he said 77 virus patients have been discharged since Wednesday, and five others have been taken off ventilators and are breathing on their own.