Atlanta mayor Bottoms praised for response to unrest in city 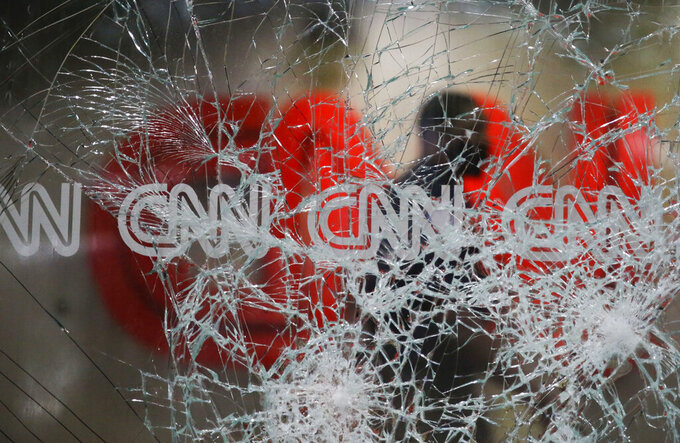 A security guard walks behind shattered glass at the CNN building at the CNN Center in the aftermath of a demonstration against police violence on Saturday, May 30, 2020, in Atlanta. (AP Photo/Brynn Anderson)

ATLANTA (AP) — When the United States erupted in unrest following Martin Luther King Jr.’s assassination in 1968, his hometown of Atlanta was one of the few major cities to maintain relative peace. Mayor Keisha Lance Bottoms invoked that history in a passionate and deeply personal plea for protesters to go home.

“When Dr. King was assassinated, we didn't do this to our city,” Bottoms said Friday night. “If you care about this city, then go home.”

The protests are quickly becoming a high-stakes leadership test for Bottoms just as her national profile is rising. She is under consideration to be presumptive Democratic presidential nominee Joe Biden’s running mate — and even if she isn’t tapped for that role, many Democrats view Bottoms as a rising star within the party.

Protests in Atlanta over the death of George Floyd, a black man who died after a white officer in Minneapolis pressed a knee into his neck, turned violent before Bottoms spoke. Police cars were smashed and CNN’s headquarters was vandalized as protests shook a city that prides itself as the birthplace of the civil rights movement.

Bottoms addressed the crowds both as a mayor and a mother.

“I am a mother to four black children in America, one of whom is 18 years old,” Bottoms said. “When I saw the murder of George Floyd, I hurt like a mother.”

When she heard of the potential of protests, Bottoms said she called her son to find out where he was.

“I said, ’I cannot protect you and black boys shouldn’t be out today,'" she said.

Her message to protesters: “You’re not going to out-concern me ... about where we are in America. I wear this each and every day.”

TJ Ducklo, the Biden campaign's national press secretary, said the presumptive nominee “has been grateful for Mayor Bottoms’ support and counsel since the earliest days of our campaign.”

"Her passion, her empathy and her strong and steady leadership are shining through during this difficult moment, and the city of Atlanta is lucky to have her leading the way,” Ducklo said.

The 50-year-old Bottoms was elected mayor in 2017 and previously served on the City Council. During a recent interview with The Associated Press before the protest, she spoke of Atlanta as a "special place where people of color are able to break traditional molds and change the landscape of who we are as a country.”

Until now, her national profile among Democrats has been eclipsed by fellow Georgian Stacey Abrams, the voting-rights activist who narrowly lost her bid in 2018 to become America's first black female governor.

But Bottoms has engaged in national issues during her time in City Hall. She was among the big-city mayors to blast Trump’s immigration policies, and she ended the city jail’s contract with federal immigration enforcement.

She’s leading the U.S. Conference of Mayors’ efforts on the census and housing policy.

Bottoms was one of Biden's earliest endorsers, providing backing that was helpful at a time when the Democratic field included dozens of candidates who spanned generations, genders and races.

She was a precinct captain in overwhelmingly white Iowa, where Biden finished an embarrassing fourth, before going on to the Southern states that reversed his fortunes and helped him become the presumptive nominee.

Biden has pledged to pick a woman as his running mate and is under growing pressure following Floyd's death to make sure that selection is a black woman. Beyond Bottoms, he's believed to be considering Abrams, California Sen. Kamala Harris and Florida Rep. Val Demings. Several white women are also contenders, including Massachusetts Sen. Elizabeth Warren and Michigan Gov. Gretchen Whitmer.

The prospect of another white vice presidential hopeful, Minnesota Sen. Amy Klobuchar, may fade given her time as a prosecutor in the county that includes Minneapolis. South Carolina Rep. Jim Clyburn told reporters on Friday that this is “very tough timing for her.”

Clyburn, whose endorsement of Biden was crucial to his commanding victory in the South Carolina primary, has spoken positively of Bottoms.

Asked during the AP interview what she'd bring to the ticket with Biden, Bottoms, a former judge and City Council member, noted that she’s served in each branch of government, with her executive tenure overlapping with a massive cyberattack on city government’s technology infrastructure and now the coronavirus pandemic.

“You’ve got to have proven leadership that’s been tested in the midst of crisis,” she said.

Sloan reported from Washington. Associated Press writers Kate Brumback in Atlanta and Alexandra Jaffe in Washington contributed to this report.