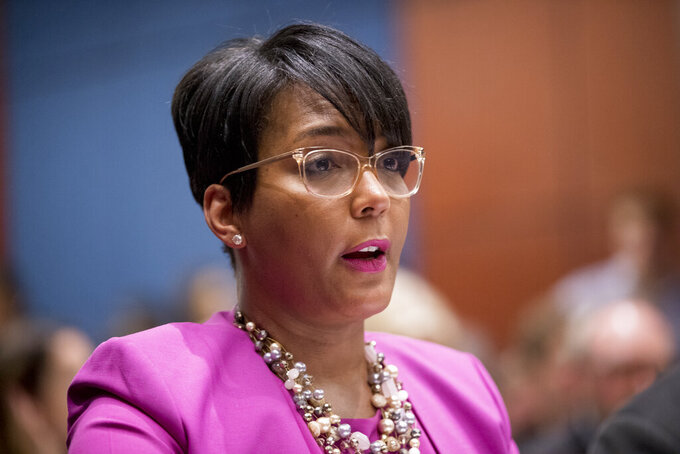 FILE - In this July 17, 2019, file photo, Atlanta Mayor Keisha Lance Bottoms speaks during a Senate Democrats' Special Committee on the Climate Crisis on Capitol Hill in Washington. Atlanta Mayor Keisha Lance Bottoms announced Thursday, May 6, 2021 she will not seek a second term, an election-year surprise that marks a sharp turnabout for the city’s second Black woman executive who months ago was among those President Joe Biden considered for his running mate. (AP Photo/Andrew Harnik, File)

ATLANTA (AP) — Atlanta Mayor Keisha Lance Bottoms announced Thursday she will not seek a second term, an election-year surprise that marks a sharp turnabout for the city’s second Black woman executive who months ago was among those President Joe Biden considered for his running mate.

Bottoms, 51, disclosed her decision publicly in a lengthy open letter and accompanying video Thursday night after having told family and a close circle of associates and supporters.

“It is with deep emotions that I hold my head high and choose not to seek another term as mayor,” Bottoms wrote, saying she’d prayed about the decision with her husband, Derek, an executive at The Home Depot Inc.

The mayor is expected to speak publicly Friday morning.

Bottoms, who narrowly won a runoff election four years ago, pushed backed against any questions about whether she could have secured a second victory later this year. She noted a reelection fundraiser she held with Biden's support and said polls showed her in a strong position.

“'Is she afraid of the competition?' NEVER,” Bottoms wrote.

Bottoms' tenure has been a mix of rough-and-tumble City Hall politics and an ever-brightening national spotlight for her beyond the city.

She was among Biden's earliest endorsers, taking a risk early in a crowded Democratic primary campaign. She was later rewarded as one of the women Biden considered to be his running mate, though he eventually chose another Black woman, Kamala Harris, the former California senator who is now the first woman to hold the national office.

Bottoms nonetheless watched her profile rise during the coronavirus pandemic and with the renewed attention on policing in the United States after George Floyd’s killing by a white Minneapolis officer last spring.

She drew plaudits for a nationally televised news conference in which she chided protesters to “go home” while noting her own experiences as a mother of Black sons to empathize with citizens distraught over police violence. She pledged to review Atlanta's police procedures in the wake of Floyd's killing.

Yet Bottoms met criticism herself just weeks later when an Atlanta police officer shot and killed Rayshard Brooks. The officer, Garrett Rolfe, was fired last June, a day after he shot the Black man in the parking lot of a fast food restaurant. Rolfe was later charged with murder.

The Atlanta Civil Service Board on Wednesday reversed the firing, finding that the city did not follow its own procedures and failed to grant Rolfe due process. Bottoms said then that Rolfe would remain on administrative leave while criminal charges against him are resolved.

The mayor did not mention Floyd or Brooks in her announcement letter, focusing instead on having giving the city's police and firefighters raises and alluding to a “social justice movement (that) took over our streets….and we persisted.”

Bottoms came to the mayor's office as an ally of her predecessor, Kasim Reed, whose endorsement proved critical in her campaign. But she sought to establish her own identity, in no small part because of a long-running FBI investigation in City Hall contracts and finances during Reed's tenure.

The “far-reaching and ever-growing” investigation, she said Thursday, “consumed City Hall, often leaving employees paralyzed, and fearful of making the smallest of mistakes, lest they too be investigated, or castrated on the evening news.”

Bottoms has never been implicated.

Early in her term, Bottoms eliminated cash bail in Atlanta and ended the city jail’s relationship with federal immigration enforcement agencies, joining big-city mayors around the country in criticizing then-President Donald Trump's hardline immigration policies. Her administration navigated a cyberattack on the city's computer systems early in her tenure.

She helped renegotiate the long-term redevelopment of “The Gulch,” part of the city's old railroad footprint downtown. But the city did not score the biggest potential prize for the location: the second Amazon headquarters that instead is being built in northern Virginia, outside Washington, D.C.

An Atlanta native and graduate of Florida A&M University, a prominent historically Black college, Bottoms is just the second Black woman to lead the city. She joined Shirley Franklin, who served two terms from 2002-2010. Bottoms noted her family’s deep ties to the city and surrounding region whose history traces Black America’s arc from slavery and Jim Crow segregation to the ongoing legacy of institutional racism.

“My ancestors, direct descendants of the once enslaved, traveled by horse and buggy from the cotton fields of east Georgia in search of a better life for themselves and their children in Atlanta,” she wrote. “I have carried their belief for a better tomorrow in my heart, their earnest work ethic in my being, and their hopes for generations not yet born on my mind, each day that I have been privileged to serve as the 60th Mayor of Atlanta.”