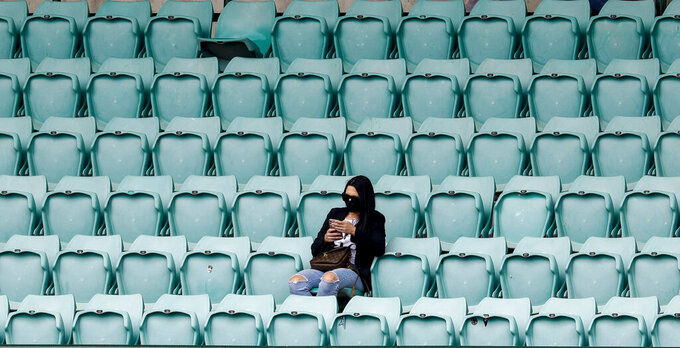 A spectator waits for play to start on day two of the third cricket test between India and Australia at the Sydney Cricket Ground, Sydney, Australia, Friday, Jan. 8, 2021. (AP Photo/Rick Rycroft)

BRISBANE, Australia (AP) — The fourth cricket test between India and Australia scheduled to be played in Brisbane is in further doubt after Queensland state officials announced a hard lockdown for at least three days due to a new COVID-19 case in Brisbane.

There has already been continuing speculation that India will refuse to travel to Brisbane for the final match of the four-test series beginning Jan. 15, wanting to avoid the Queensland government’s strict biosecurity protocols. If so, the match would then be played in Sydney, where the third test between the teams is ongoing.

Both squads are due to travel to Brisbane on Tuesday, the day after Brisbane’s stay-at-home restrictions are currently scheduled to end. The teams are level 1-1 in the series.

A cleaner at a quarantine hotel in Brisbane has tested positive for the highly contagious U.K. variant of COVID-19, prompting the state government to take drastic action.

The restrictions begin at 6 p.m. on Friday and end at 6 p.m. Monday.

When asked about the Brisbane test match, the premier replied: “Still talking . . . still positive talks at this stage.”