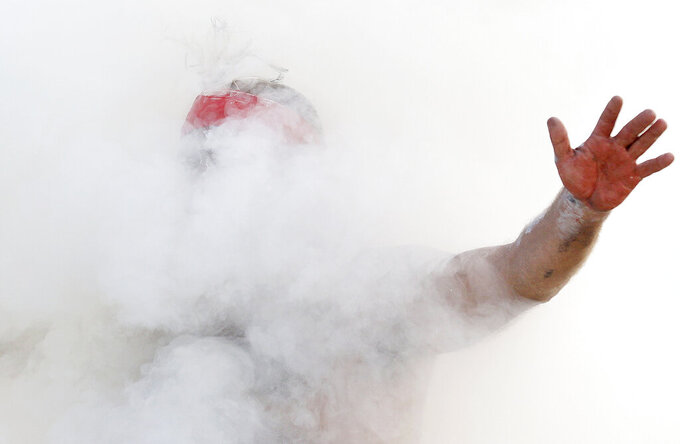 The 4,000 protesters who gathered in small groups in Sydney’s Domain were warned they could be fined or jailed for breaching limits on large crowds. But many protesters wore masks and adhered to social distancing guidelines, and only a few arrests occurred for not following police orders.

Protest organizers called for Australia Day, which recognizes the day the British navy arrived with convict ships and raised a flag signaling the intent to found a British colony, to be abolished.

“They’re out there celebrating this day like it’s a birthday or Christmas,” said Paul Silva, a nephew of David Dungay Jr., who died in police custody in 2015. He said Jan. 26 was ”the day when our ancestors were murdered.”

Elsewhere in Australia's biggest city, the usually vibrant Sydney Harbour was almost empty as most of the events were scaled back or cancelled to prevent the spread of the coronavirus.

“We must also recognize, as a mature and decent nation, that today is a day that causes pain for some of our First Nations people,” she said. “We cannot and should never deny any aspect of our history, or the key milestones that have made us the nation we are today.”

People also have been divided over whether former tennis champion Margaret Court should have been given the nation’s top civilian award, the Companion of the Order of Australia.

The award was given to recognize Court’s service to tennis as winner of a record 24 Grand Slam singles titles and a mentor for young athletes. But Court’s tennis achievements have been overshadowed by her outspoken homophobic views.

Journalist Kerry O’Brien rejected an Australia Day award he was to receive this year to take a stand against Court receiving her honor, and Canberra Dr. Clara Tuck Meng Soo handed back her 2016 award in protest. Soo received her award for her work with the LGBTQ community and those with HIV and drug dependencies.

Court, a Pentecostal minister who runs a church in Perth on the west coast, said last week she won’t change her opinions.

“All my life I’ve had those views and I was just saying what the Bible says,” Court said. “I should always be able to say my views biblically, being a pastor and helping people with marriages and family. And I’ll never change those views.”

In the capital Canberra, Australian Prime Minister Scott Morrison attended a flag-raising and citizenship ceremony and told those gathered that Jan. 26 had changed the country forever.

“There is no escaping or cancelling that fact. For better and worse, it was the moment where the journey to our modern Australia began. And it is this continuing Australian journey that we recognize today," he said. “Our stories since that day have been of sorrow and of joy, of loss and redemption, of failure and of success.”