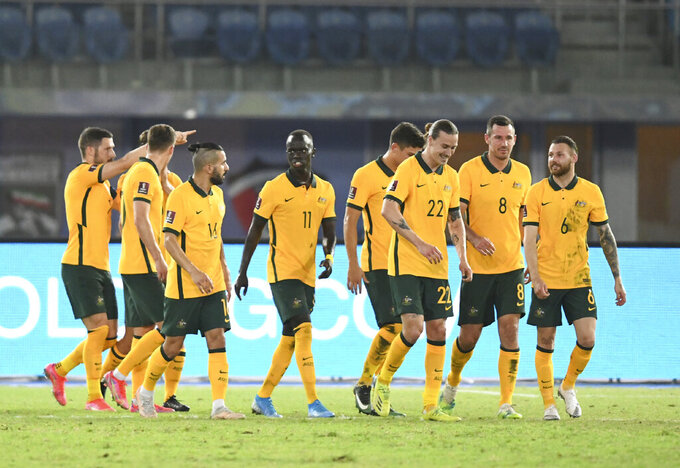 The Socceroos previewed their first match in 567 days with a simple message: We're back.

It took just 55 seconds for the Australians to start proving it.

After the coronavirus pandemic forced a 19-month delay in their World Cup Asian qualifying campaign, it took less than a minute for Mathew Leckie to head in the opening goal of a 3-0 win over Kuwait on a sweltering Thursday night in Kuwait City.

Jackson Irvine extended Australia’s lead midway through the first half, firing home the rebound after Martin Boyle’s penalty miss. Eintracht Frankfurt’s Adjin Hrustic netted the third with a free kick in the 66th minute as Australia sealed a fifth win in five games.

Australia coach Graham Arnold assembled a squad of players from more than a dozen leagues around the world for their first international match since November 2019, but said they settled quickly into the familiar pattern of being with the Socceroos.

“I thought the energy was great,” Arnold said. “It only takes a day to reconnect. They proved that tonight. They played a very good game — should make the country proud.”

Australia moved five points ahead of Kuwait and Jordan in Group B with three games remaining and can seal its place in the third round of qualification with wins over Taiwan and Nepal next week. Only the eight group winners are guaranteed a place in the next stage, which starts in September, along with the four best second-place teams.

Elsewhere in the second round of Asian qualifying, Ali Mabkhout of the United Arab Emirates scored twice in a 4-0 win over Malaysia in Group G to become the second-highest active goalscorer in international soccer, above Lionel Messi.

The striker now has 73 goals for his country, two more than Messi has scored so far with Argentina and behind only Cristiano Ronaldo's 103 goals for Portugal. Ali Daei of Iran is the all-time leading international scorer with 109 goals.

“We made a strong return to qualification after a long break,” UAE coach Bert Van Marwijk said. “We have to keep performing in the same way to achieve our goal of reaching the next stage.”

With Thailand and Indonesia playing to a 2-2 draw, UAE moved second in the group, two points behind leader Vietnam with three games to play.

In Group E, Qatar had a 1-0 win over India to move seven points clear of Oman in second, and Afghanistan drew 1-1 with Bangladesh. The Palestinian team beat Singapore 4-0 to climb out of last place in Group D.