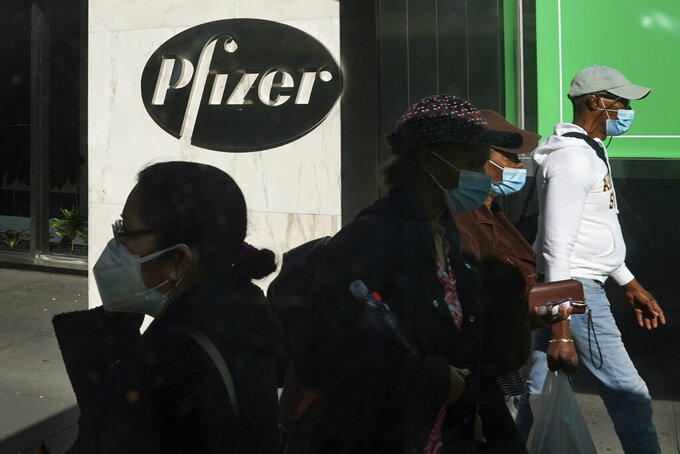 FILE - In this Nov. 9, 2020, file photo, pedestrians walk past Pfizer world headquarters in New York. A U.S. government advisory panel convened on Thursday, Dec. 10, to decide whether to endorse mass use of Pfizer's COVID-19 vaccine to help conquer the outbreak that has killed close to 300,000 Americans. (AP Photo/Bebeto Matthews, File)

CANBERRA, Australia (AP) — Australian Prime Minister Scott Morrison said Friday that his government won't rush approval of Pfizer’s coronavirus vaccine because he wants people to have confidence in the product

His comments come as Australian researchers said they were abandoning their own potential vaccine because it produced false positive results to HIV tests.

Morrison said Australia was in a different position to Britain, which has given emergency approval to the Pfizer roll out, and the United States, where a government advisory panel has endorsed the Pfizer vaccine.

“We want to ensure that Australians — and I think all of us feel very strongly this way — have ... absolute full confidence that when it gets the tick, they can get the jab,” Morrison said.

“They can make that decision for themselves and for their families confidently,” he added.

Australia has 47 active COVID-19 cases, with 36 of those people in hospitals. The pandemic has claimed 908 lives in Australia.

Australia “has a front-row seat” observing the roll out in Britain and the United States and would learn from the overseas experiences, particularly through a data-sharing agreement with London, Morrison said.

The government expects the Australian regulator to approve the vaccine produced jointly by Pfizer and BioNTech by late January. The Australian roll out was expected to be underway by March.

Australia has an agreement for 10 million Pfizer doses and will have an option to buy more for its 26 million people if supplies allow.

Australian researchers announced Friday they had abandoned development of a potential vaccine because the false positive results to HIV tests undermined public confidence.

The University of Queensland state vaccine that was to be manufactured at Australian biopharmaceutical company CSL’s Melbourne headquarters had proven safe and produced a “robust response” to COVID-19 during Phase One trials, researchers said in a statement

But the researchers and the government had agreed not to proceed further because of the false positive HIV result due to a protein contained in the potential vaccine.

“All the evidence suggested it would be an effective vaccine, but we cannot risk public confidence. We just can’t,” Health Department secretary Brendan Murphy told reporters.

Under an agreement with the Australian government, 51 million University of Queensland vaccine doses manufactured by CSL were to be available to Australians from the middle of 2021.

It was one of five potential vaccines on which the Australian government had signed contracts with developers in deals worth 3.3 billion Australian dollars ($2.4 billion).

Its failure was a major blow to Australian vaccination plans to become self-sufficient.

Only one other, the University of Oxford vaccine, would be manufactured in Australia. It would be produced by CSL in partnership with British-Swedish multinational biopharmaceutical company AstraZeneca.

Murphy said the increase in government’s order for the potential AstraZeneca vaccine would mean that Australia could manufacture enough doses for its entire population.

“Onshore manufacturing is a very precious thing in terms of getting good access over the course of next year,” Murphy said.

Morrison was speaking after his first face-to-face meeting with Australian state leaders since the pandemic began.

The so-called National Cabinet has been meeting at least once a month since March via video because of the infection risk and pandemic bans on travel across some state borders.

But the risk and pandemic restrictions have been largely relaxed across the country with the dwindling number of cases.

Only Western Australia state Premier Mark McGowan did not attend the National Cabinet meeting in the national capital Canberra in person to avoid contact with his South Australian counterpart Steven Marshall.

South Australians are banned from Western Australia and McGowan would have had to go into quarantine for two weeks on his return home if he had been in the same room as someone who had recently visited South Australia.

The Western Australia-South Australia border will open on Saturday to travelers who are willing to undergo 14 days of hotel quarantine in the western state, which last recorded a case of community transmission of the virus on April 11.