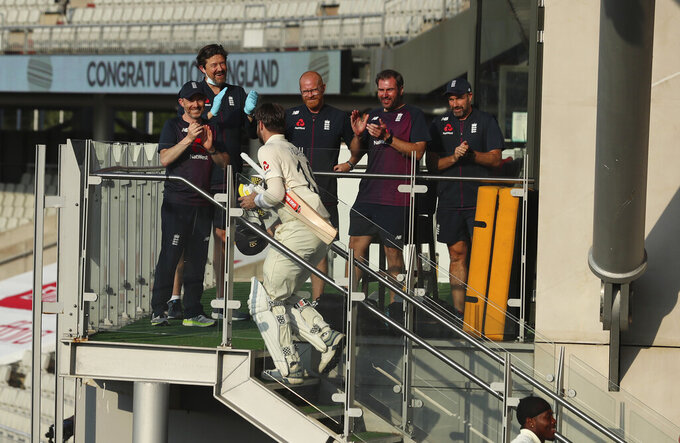 Members of team support staff cheer for England's Chris Woakes after their win on the fourth day of the first cricket Test match between England and Pakistan at Old Trafford in Manchester, England, Saturday, Aug. 8, 2020. (Lee Smith/Pool via AP)

MELBOURNE, Australia (AP) — Aaron Finch’s cricket squad will be the first national team to leave Australia during the COVID-19 pandemic when they travel to England ahead of a compressed stretch of six official matches in 13 days.

The tour, which was originally scheduled for July, was granted approval Friday by Cricket Australia’s board and the federal government as well as the England and Wales Cricket Board.

Australia’s 21-man squad will fly out of Perth, Western Australia, on Aug. 23.

The Australian lineup will play four warm-up matches in Derby before shifting to Southampton for three Twenty20 internationals against England on Sept. 4, 6 and 8. The series will wrap up with three ODIs at Old Trafford on Sept. 11, 13 and 16.

The Australian squad will remain locked in a bio-security bubble at hotels incorporated into the match venues. England, currently playing a series against Pakistan, hosted West Indies under similar conditions last month in the first international cricket to return after the coronavirus lockdown.

Pat Cummins headlines the list of players expected to head straight from England to the United Arab Emirates for the Indian Premier League, which starts Sept. 19 and is set to finish with a final on Nov. 10.

Other players will return home directly for a two-week quarantine period in Perth. Australia is set to host India in a four-test series later in the year.

ECB chief executive Tom Harrison said the England board owed “a significant debt of gratitude to the players, staff and administrators of Cricket Australia for their efforts in getting this tour underway."

“Their co-operation to ensure these matches are staged is crucial to cricket in this country. It will also provide much-needed financial aid at all levels of cricket in England and Wales as we work through the challenges in front of us.”