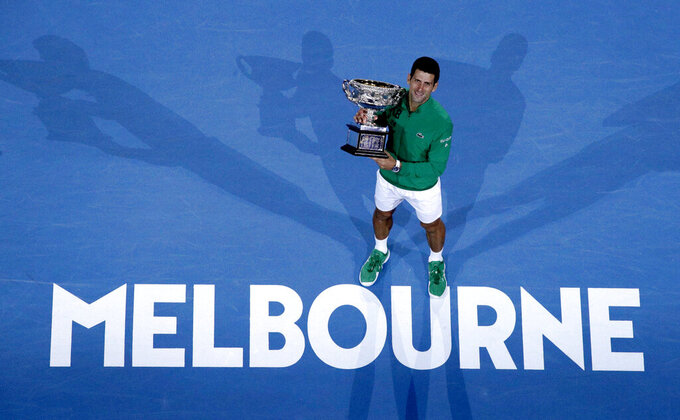 MELBOURNE, Australia (AP) — The Victorian state government has confirmed that all players at the Australian Open will be required to quarantine in Melbourne for 14 days before the delayed start of the Feb. 8-21 first Grand Slam tennis tournament of the year.

The government said Saturday that quarantine plans have been endorsed by the Chief Health Officer and that it would work with Tennis Australia to finalize a COVID-safe plan that “ensures the safety of all parties . . . rigorous infection prevention and control measures will be central to these arrangements."

Qualifying for the men's singles draw in Melbourne will take place in Doha, Qatar and for the women's in Dubai, both from Jan. 10-13. The Australian Open junior tournament will not be held until later in 2021.

Players are expected to arrive in Melbourne from mid-January, undertaking a mandatory two-week quarantine period that permits them to train for a maximum of five hours per day at Melbourne Park, site of the Australian Open.

A statement said players and their support teams will be tested prior to departing for Australia and then a minimum of five times during their quarantine period. If they test positive, they will be subject to standard quarantine arrangements until being cleared by public health officials.

The Australian Open was delayed by three weeks while plans were worked out for the quarantine arrangements.

Victoria state went through a serious second wave of COVID-19 infections in the last half of this year, resulting in more than 800 deaths after lockdowns and overnight curfews were instituted. But the state has not had any new active cases in more than six weeks.

As with other sports, tennis was disrupted this year because of the COVID-19 outbreak, including several months with no competition, the postponement of the French Open’s start from May to September, and the cancellation of Wimbledon for the first time since World War II.