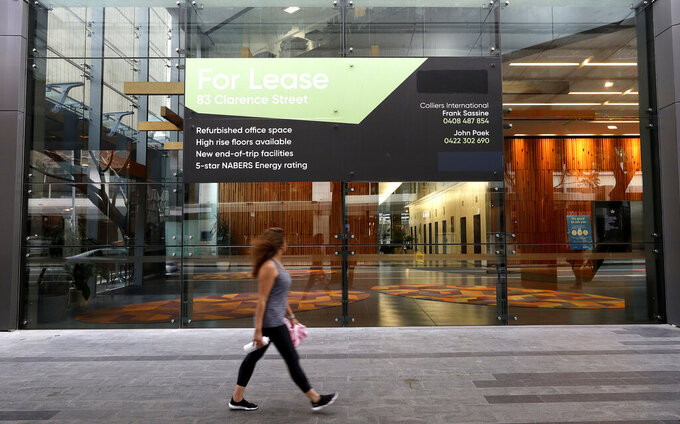 A woman walks past a lease sign at a commercial building in Sydney, Wednesday, Sept. 2, 2020. Australia's economy has suffered its sharpest quarterly drop since the Great Depression because of the pandemic, with data released on Wednesday confirming the country is experiencing its first recession in 28 years. (AP Photo/Rick Rycroft)

CANBERRA, Australia (AP) — Australia’s economy has suffered its sharpest quarterly drop since the Great Depression because of the pandemic, with data released on Wednesday confirming the country is in its first recession in 28 years.

The latest national accounts showed the economy shrank 7% in the June, the biggest contraction since records began in 1959.

Its nearest rival was a 2% fall in June 1974. Economists estimate a sharper fall of 9.5% in 1930, when Australian became one of the world’s hardest-hit countries by the Great Depression.

Combined with a smaller 0.3% drop in the March quarter, the definition of a technical recession -- two consecutive quarters of contraction — has been fulfilled.

“Our record run of 28 consecutive years of economic growth has now officially come to an end,” he added.

Prime Minister Scott Morrison told Parliament: “This is a devastating day for Australia.”

Organization for Economic Cooperation and Development figures show the average contraction among OECD countries in the June quarter was 9.8%, including a 20% slump in the Britain, a 14% downturn in France and a 9.1% drop in the United States.