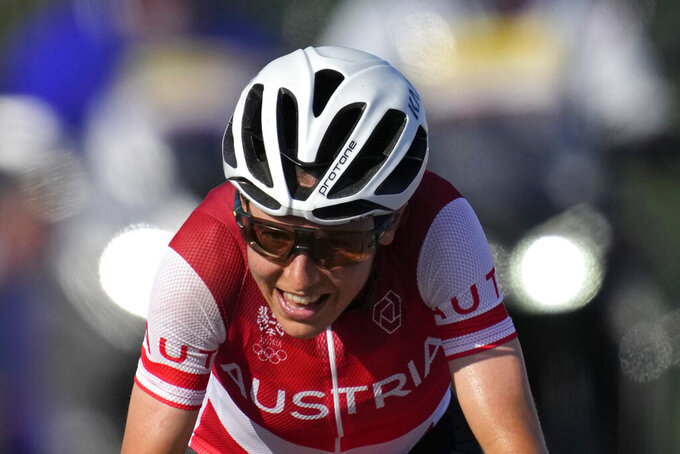 Anna Kiesenhofer of Austria, rides solo on her way to the gold medal in the women's cycling road race at the 2020 Summer Olympics, Sunday, July 25, 2021, in Oyama, Japan. (AP Photo/Christophe Ena)

Make them forget you're even there.

The mathematician from Austria got into an early breakaway Sunday, then built a gap so big the rest of the field failed to remember she was out ahead. So when Annemiek van Vleuten escaped in the final kilometers and crossed the finish line alone, she threw her arms into the air thinking she had won a third straight gold medal for the Netherlands.

Her teammate and defending champion Anna van der Breggen also thought she won. So did Britain's Lizzie Deignan, who told the BBC: "The best person won the bike race here today. Annemiek was clearly the strongest.”

Turns out it wasn't so clear. She wasn't the strongest.

There are no radios allowed at the Olympics, like there are at professional races, and that makes it difficult to know where riders stand on the road. But it became clear from the lack of urgency in the peloton to chase Kiesenhofer down at the end of a brutally hot day in the saddle that most riders simply forgot she was there.

“I couldn’t believe it,” Kiesenhofer said. “Even when I crossed the line, it was like, ‘Is it done now?'”

Her elation stood in stark contrast to the bitter disappointment for the 38-year-old van Vleuten, who was trying to follow in the footsteps of van der Breggen and 2012 champion Marianne Vos. Five years ago, van Vleuten was leading in Rio before a horrific crash on a sharp descent left her with a concussion and three fractures in her lower back.

“I'm gutted,” van Vleuten said. “With five kilometers to go, Marianne came up to me, none of us knew if everyone was caught back. This is an example of what happens if you ride an important race like this without communication."

Kiesenhofer's curriculum vitae features more academic accomplishments than cycling ones: a degree from the Technical University of Vienna, studies at Cambridge and a doctorate from the Polytechnic University of Catalonia. She spends time teaching at the University of Lausanne in Switzerland rather than doing altitude training in the Alps.

In fact, Kiesenhofer doesn't have a coach or professional cycling contract. She manages her own nutrition and creates her own training plans. She was entered in the road race without the benefit of an Austrian teammate to help her out.

None of that mattered.

Kiesenhofer held her arms in triumph — just as van Vleuten would minutes later — as she finished before a crowd of several thousand fans. Then she toppled to the asphalt, face crusted in sweat, and fought back tears at the realization she had won Austria's first cycling medal since Adolf Schmal at the first Summer Olympics in 1896.

“It’s just so incredible," Kiesenhofer said. “I have really sacrificed so much for today. I wasn’t expecting to finish it off like that. I sacrificed everything even for a top-15 place and now to get this, for the sacrifices, it’s just such a reward.”

Tight COVID-19 controls that have kept fans from seeing most of the Olympics in person do not apply in the Shizuoka Prefecture, so thousands turned out for the second consecutive day to watch the racing at Fuji International Speedway.

Dutifully wearing masks, they lined the barricades from the start at Musashinonomori Park. They hiked up the two climbs through scorching Japanese summer heat to watch the riders pass. And they filled a long, double-decker grandstand on the finishing straightaway at the old Formula 1 circuit to await their dash for the line.

The German team controlled the early stages of the race, trying to protect Lisa Brennauer, but all eyes were on the four-woman Dutch team — van Vleuten, Vos, reigning gold medalist van der Breggen and young standout Demi Vollering — as the peloton rolled through the hilly, forested countryside.

The problems began for the Dutch in the middle part of the race.

Van Vleuten had a mechanical issue that resulted in a bike change, forcing Vos to drop back and help pace her teammate into the field. As soon as they arrived, Danish rider Emma Cecilie Joergensen hit the deck and van Vleuten locked up her back wheel and rode right into her, leaving their bikes tangled on the tarmac.

The attacks began to fly with 60 kilometers left in the 137-kilometer journey southwest of Tokyo.

Vollering went first. Van der Breggen took a shot. Then, recovered from her earlier spill, van Vleuten charged away as the peloton continued toward the finish, no doubt dreaming of winning a race that has haunted her for years.

Problem was Kiesenhofer was grinding away somewhere up the road.

She had left breakaway companions Omer Shapira of Israel and Anna Plichta of Poland before reaching the speedway, then held a gap of five minutes as she began a closing circuit. Despite more attacks from the field, rapidly escalating tempo and the lactic acid building in her legs, Kiesenhofer kept her head down and concentrated solely on herself.

“Nobody expected me to come away with a top result here,” she said. “Even myself, I didn't believe it.”