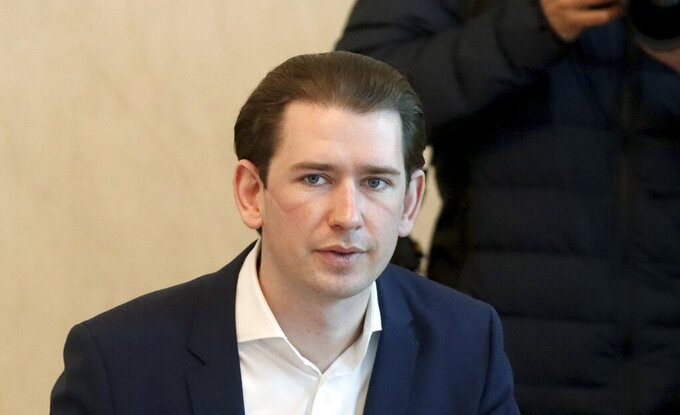 BERLIN (AP) — Austrian Chancellor Sebastian Kurz defended his criticism of the coronavirus vaccine distribution in the European Union, though he struggled to say whether the appraisal would lead to his country receiving any more doses.

Kurz maintained during an EU summit on Thursday that some countries were getting more than their fair share of vaccine supplies and demanded a correction mechanism. Pressed about his comments Friday, Kurz said everyone “enters a negotiation with a maximum position.”

He said an expected delivery of 10 million doses of the Pfizer/BioNTech vaccine to the EU would make it possible to “equalize” distribution. Kurz could not say how many of the doses Austria would receive.

“I think what is important is that at the end of the day there is an equitable solution," he told reporters in Vienna.

The EU makes vaccine doses available to its 27 member nations on a pro-rata basis, or according to population, and there are no indications of plans to change that system.

Not all countries, including Austria, have purchased all the vaccines that have been made available to them, however, a situation German Chancellor Angela Merkel pointed out late Thursday after the EU leaders' summit.

“Pro rata is the basic mechanism we have agreed upon. It is not a new mechanism, it is an old mechanism,” she said. “It just turns out that not everyone has made use of pro rata.”

European Commission President Ursula von der Leyen tweeted a video Friday in which she said that the EU remains “on track to achieve our goal that this summer we want to have 70% of the adult population in the European Union vaccinated.”