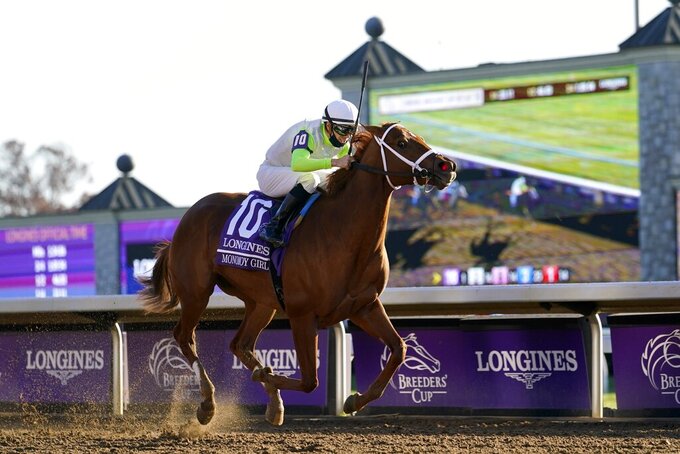 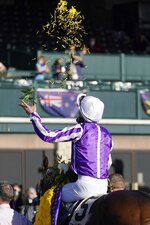 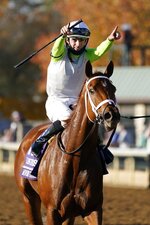 LEXINGTON, Ky. (AP) — From start to finish, Authentic left no doubt he was the horse to beat in the Breeders’ Cup Classic.

His dominant performance on another big stage should also end the debate about this year's top 3-year-old, strange as the season has been because of the coronavirus pandemic.

Authentic won the Classic in the same fashion he took the rescheduled Kentucky Derby two months ago, going wire-to-wire for a 2¼-length victory over Improbable that gave trainer Bob Baffert a 1-2 finish on a warm, sunny fall Saturday at Keeneland.

And perhaps erased Baffert's regret over Authentic's narrow runner-up finish to filly Swiss Skydiver in last month's Preakness, also shifted to the fall because of the pandemic.

“He just struggled that day,” Baffert said, "but we got him back and I’ve got a great team and we just tightened the screws on him.

“He's just matured. He’s maturing right now and this ... is the time of the year they catch up.”

There wasn't any catching up to Authentic on Sautrday as he broke quickly out of the No. 9 gate between stablemates and set the pace for the 10-horse field to follow. Maximum Security, last year's 3-year-old champion, pursued for a while before Global Security overtook him and then was passed by Improbable entering the stretch.

Authentic, at 9-2, never let up with John Velazquez aboard and extended his lead by the end.

“I didn’t think it was that much speed in the race, other than the other horse that Bob had on outside,” said the Hall of Fame jockey, referring to Maximum Security. "And I thought we were going to be quicker than him anyway.

“Once we got in front and I passed the wire for the first time, I mean, it was pretty easy from there, yeah.”

Authentic earned his fifth win with two seconds in seven starts this year, strengthening his case as the year’s top 3-year-old. The victory bookended a successful day for Baffert, whose filly Gamine opened the $31 million season-ending world championships with a dominant, record-setting win in the $1 million Filly and Mare Sprint.

Both horses will certainly be named in any Eclipse Award discussion, and Baffert's bias for Authentic was obvious.

“There was a lot on the line,” he said. “What he did today was pretty amazing.”

As for Gamine, she beat retiring great Serengeti Empress by 6¼ lengths and clocked a track-record 1:20.20 over seven furlongs to top Taris’ old mark of 1:21.32 on Oct. 18, 2014. Her fourth victory this year comes after a tumultuous year in which she tested positive for lidocaine in May and for betamethasone, a regulated corticosteroid, in September.

Baffert is appealing a suspension in the first case, while results are pending from a split-sample test in the second. He wasn't necessarily seeking vindication but got it anyway with the win and gushed over his filly.

“She showed what a wonderful filly she is and there was no doubt today,” Baffert said. “That was a tough field. Serengeti Empress, we know she’s a great filly and there were some really nice fillies in there. And to break a track record.”

There was tragedy just before the nine-race card began, when colt Absolutely Aiden had to be euthanized following an injury that occurred during a scary chain-reaction incident in the $150,000 Lafayette that toppled mount Chris Landeros and fellow riders Tyler Gaffalione and David Cohen from Dinar and Strike That.

Optimum weather and conditions on the dirt and turf led to not only several record-breaking runs but also an impressive showing by European horses, a seasoned veteran and two wins by a substitute jockey.

Just before the Classic, even-money favorite Monomoy Girl blew by the leaders around the final turn and held off a challenge by 14-1 shot Valiance to win the 1 1/8-mile Distaff for the top fillies and mares 3 years old and up. The star 5-year-old won for the 13th time in 15th races, giving trainer Brad Cox his fourth win at this Breeders’ Cup to tie the record.

“I thought she was better than she’d ever been coming into this, I really, really did, and I think she proved that,” said Cox, whose horse won in 1:47.84. “Just a tremendous filly. She’s a champion.”

This is likely Monomoy Girl’s last race before she becomes a broodmare. Her second Cup win in three years followed a big upset in the Mile by Order of Australia.

The 73-1 longshot, entered following a scratch and with a substitute rider aboard, won the $2 million race by a neck over Circus Maximus.

The Irish-bred colt entered the 15-horse field after One Master was scratched. Jockey Pierre-Charles Boudot was riding in place of Christophe Soumillon, who tested positive for COVID-19 this week. Earlier, Boudot rode 17-1 French bred Audarya to victory in the Filly & Mare Turf.

Another Irish bred, Tarnawa, won the $4 million Breeders' Cup Turf immediately before the Classic with Colin Keane in Soumillon's place.

British-bred filly Glass Slippers earned a half-length victory over Wet Your Whistle in the 5½-furlong Turf Sprint. The 4-year-old filly’s time of 1:01.53 was just off the track record of 1:00.86 by Leinster in July.

And then there was 7-year-old Whitmore, who showed there was plenty left in the tank with a stunning stretch run to win the $2 million, 6-furlong Sprint. The 18-1 choice saved his best for last as he stormed outside from near the rail in the stretch to win by 3¼ lengths and earn his first Breeders’ Cup win in four starts.

As if 15 wins in 38 starts and more than $3 million in earnings weren't remarkable enough for the graybeard.