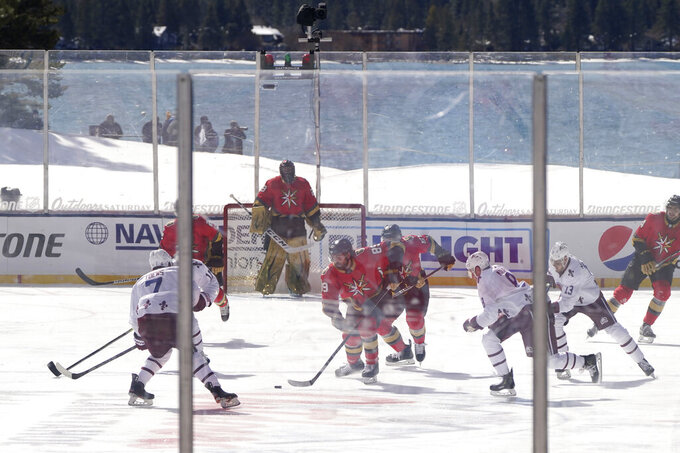 STATELINE, Nev. (AP) — Everyone knew playing an outdoor game on a golf course near Lake Tahoe instead of in a stadium would provide a unique experience.

Few could have imagined how it all turned out with the game starting with breathtaking views in the sunshine, taking an eight-hour break because of bad ice conditions and ending late at night.

Nathan MacKinnon scored a dazzling goal more than nine hours after assisting on another to highlight a most unusual and lengthy outdoor game that the Colorado Avalanche won 3-2 over the Vegas Golden Knights on Saturday.

“It was weird. It feels like a blur honestly,” MacKinnon said. “The ice was bad but we never thought of stopping. I never thought that was a possibility. I thought we would grind it out. ... This was definitely more enjoyable, the second and third tonight.”

The game started in bright sunshine that led to a delay of more than eight hours following the first period because of poor ice conditions and ended in the dark 10 hours, 37 minutes later.

“It was a unique one and a game that people will remember for a long time,” Colorado captain Gabriel Landeskog said. “Maybe not for the hockey game but for everyone falling in the first period this morning. Nonetheless it was a great experience and hope the fans who were able to stay up for this game were able to see how special a place this is.”

The Avalanche were the better team during both parts of the game and got the victory thanks in large part to MacKinnon, who assisted on Samuel Girard’s first-period goal and scored his own in the second.

MacKinnon’s highlight-reel play started with a back check that forced a turnover by Mark Stone in Colorado’s zone. MacKinnon then took possession and rushed up ice, eluding Stone in the neutral zone and then taking on Alex Pietrangelo before beating Marc-Andre Fleury for the goal that gave Colorado a 2-1 lead.

“I thought Nate was outstanding,” coach Jared Bednar said. “He just looked like a man on a mission right from the get go.”

The Avalanche killed 1:22 of a two-man advantage in the third period and held on for the win thanks to 27 saves from Philipp Grubauer and an insurance goal from Devon Toews that MacKinnon also assisted.

With the COVID-19 pandemic preventing the NHL from staging its typical outdoor games at a jam-packed football or baseball stadium, the league took the opportunity find a more unique venue outside a stadium that took players back to their childhood playing on frozen ponds or makeshift backyard rinks.

Although it’s fair to say that none of those had the picturesque setting of this rink located on the 18th fairway of a golf course on the shores of Lake Tahoe and surrounded by trees with snow-covered mountains towering in the background.

While the setting was perfect, the conditions weren’t quite the same with the bright sun creating slushy ice that led to several falls by players and officials. That led to the decision to halt the game after the first period and wait until the sun went down and the ice surface could be repaired to finish the game following the delay of more 8 hours, 7 minutes.

“There was a reason why they postponed it,” Vegas defenseman Alec Martinez said. “Obviously they did the best they could but the sun was beating down on it too much and was melting the ice. There were some big chunks taken out. We obviously didn’t want anyone getting hurt. If big chunks are coming out of the ice all the way to the cement, that’s obviously dangerous playing conditions.”

The delay was made easier because the only fans at the game were the few on kayaks and boats in Lake Tahoe with an obstructed view of the ice.

When the game resumed at 9:02 p.m. the Avs were on a power play that carried over from the afternoon and had a stretch with 15 straight shots that ended when Martinez knocked a rebound of Pietrangelo’s shot to tie the score at 1.

“The ice tonight was phenomenal,” Tuch said. “It was like skating on the outdoor rink as a kid. The ice was like glass.”

Fleury made 36 saves for Vegas and fell to 0-3 in three career outdoor game starts.

The Avs controlled the play under the sun, getting an early goal from Girard and outshooting Vegas 17-8 in the first 20 minutes. Colorado couldn’t convert on a two-man advantage in the final 80 seconds of the opening period with Fleury robbing Mikko Rantanen late to keep the game at 1-0.

The Avalanche debuted their reverse retro jerseys as part of their 25th anniversary season in Denver. The jersey is based on the uniform the organization wore during its time in Quebec City as the Nordiques.

The teams finish their four-game series that began with two games in Las Vegas with a meeting Monday night in Colorado.