Baby Girl Sussex is coming, so what's big bro Archie to do? 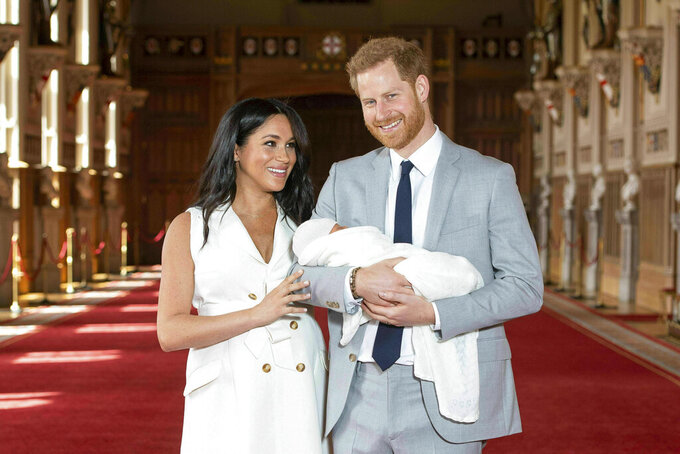 FILE - Britain's Prince Harry and Meghan, Duchess of Sussex, pose with their newborn son Archie Harrison Mountbatten-Windsor in St George's Hall at Windsor Castle, Windsor, south England, on May 8, 2019. It won't be long before Archie is a big brother. His mother is due to give birth to a baby girl sometime this summer. Hopefully, the introduction of the new sibling will go smoothly, but seasoned parents and pediatric experts warn that the transition takes preparation and diligence. (Dominic Lipinski/Pool via AP, File)

NEW YORK (AP) — Archie Harrison Mountbatten-Windsor, the 2-year-old son of Prince Harry and Duchess Meghan, will soon have a sister in the California hamlet the decamped royals call home.

Hopefully, the introduction of Baby Girl Sussex in Montecito will go smoothly for the toddler, but seasoned parents and pediatric experts warn that for any family, the transition takes preparation and diligence. Throw in the upheaval of a pandemic for extra challenges that can include toilet regression, sleep strikes and aggressive behavior.

Fear not. There are myriad ways to help make the introduction of siblings as smooth as possible.

For starters, mom-of-two Morgan Ball advised: Try to take it all in stride.

“Hope for the best and plan for the worst,” said the 34-year-old Ball in suburban Columbus, Ohio. “Don't freak out about it. Kids have big feelings. They do weird things. They might bite their baby brother and that does not mean they're going to be a serial killer.”

Ball's oldest was 3 when his brother was born in April 2020 as pandemic panic took hold. To make matters worse, her husband's father had died suddenly not long before, further rocking young Charlie's world.

“I'm sure there's a lot of people who could tell a similar story because they lost someone during COVID," she said. “It's been tough in terms of his behavior. It took a lot of understanding."

Ball and her husband knew about the usual suggestions to prepare Charlie, including reading him books about babies and new siblings, letting him pick out a gift for his new brother and giving him a baby doll.

“I wish I would have done more of that,” she said.

During the early weeks, while Ball was recovering from the birth, she and her husband did something else. “We would trade off. We would ask, who's more reasonable right now? OK, you go get that,” Ball said.

Helen Egger, a child psychiatrist and chief medical officer for Little Otter, which provides online therapy, parenting support and other mental health services for kids and their families, agreed the stress and isolation of the pandemic can make introducing a sibling more difficult.

“Many young children have not attended preschool or daycare or been with a babysitter. They have missed out on playing with other children in these settings or at the park or during playdates,” she said. “Your little one may never have met a baby!”

For siblings Archie's age, Egger suggests that parents avoid using too many words and long explanations. She's a fan of the baby doll or stuffed animal approach for acting out scenarios, such as bathing, rocking and holding a baby.

“You can pretend to change diapers or how to peek into the crib or bassinet quietly to see if the baby is sleeping, or how to be gentle with the baby,” Egger said. “When you play, also let your little one take the lead. You will learn things about their feelings.”

Because of COVID, hospitals and doctor's offices often don't allow children at mommy's check-ups or visits after birth.

“So the first thing to think about is to prepare your child for mom being at the hospital. Just as you pack a mom's birth bag, you might consider packing one for your toddler at home with some special toys and a special card from mom that says, ‘I love you,’" Egger said.

Caitrin O'Sullivan in Red Bank, New Jersey, has been through it a time or three. She recently gave birth to her fourth child. Her oldest is 5. This time, there were fewer opportunities to bring her older kids into the process due to pandemic restrictions.

“But one of the pros is we've been home with the kids, and there's been a lot more time to talk to them about mommy's belly and this and that,” she said.

She used a phone app that includes videos of fetal growth, and she bought a handheld device for the kids to listen to the baby's heartbeat at home.

“And once the baby is home, I'd say the biggest thing to do is carve out that one-on-one time for the older kids, especially if they're Archie's age, because they don't fully grasp and understand and rationalize what's going on. They just know they're not getting the special attention they used to get,” O'Sullivan said.

O'Sullivan takes her 5-year-old daughter out to get her nails done, followed by lunch. She treats her 4-year-old son to a trip to a nearby video arcade.

One thing to avoid, she said, is talking about the pregnancy and the new baby non-stop.

“Especially with this fourth one we didn't. I mean, I work full time. My husband works full time. Nobody was talking about this baby 24/7,” O'Sullivan said.

Other parents warned against overdoing the notion that the new baby is a big sibling's responsibility. A father said he and his wife took their 2-year-old daughter to big sibling class at their hospital and she stressed out thinking she'd be in charge of her sister all the time.

If a newborn is taking over an older sibling's crib or nursery, make that transition well in advance of the birth, another parent suggested. Still another recalled relatives who sent their toddler to grandma's house for the birth. When she arrived home, she found a new baby in her bed. She was far from pleased.

Once a new baby is settled, parents need to balance each child's moment-to-moment needs.

“It depends on your own kids,” O'Sullivan said. “My 5-year-old daughter is so into the baby. My 4-year-son is like, he's cool but he's not my responsibility.”

O'Sullivan had another important thought for all parents: “There's no one way to be a perfect parent but there's a million ways to be a really good one.”