Back in the bubble, Chinese Super League into playoff stages 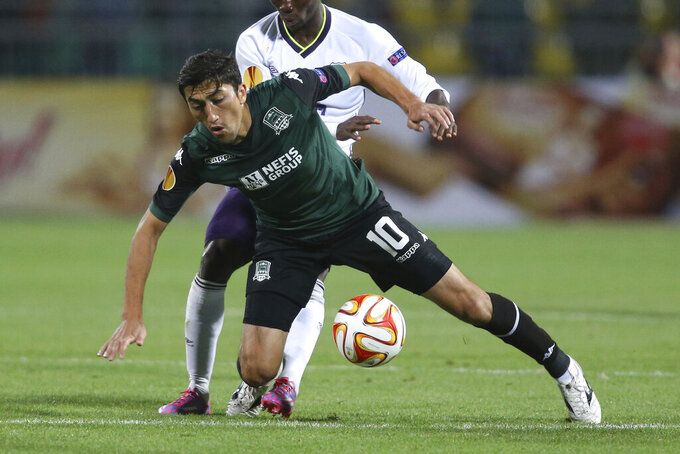 FILE - In this Oct. 2, 2014, file photo, Krasnodar's Odil Ahmedov, front, fights for the ball with Everton's Christian Atsu during the Europa League Group H soccer match between Krasnodar and Everton in Krasnodar, Russia. In a bid to complete the 2020 season in the midst of restrictions caused by the COVID-19 pandemic, the Chinese Football Association decided to split the 16 top-tier CSL teams into two groups based in the hub cities of Dalian and Suzhou. (AP Photo/Vitaly Timkiv, File)

He merely moved to a different part of the hotel both teams had called home since July, and took a seat at a new breakfast table.

In a bid to complete the 2020 season in the midst of restrictions caused by the COVID-19 pandemic, the Chinese Football Association decided to split the 16 top-tier CSL teams into two groups based in the hub cities of Dalian and Suzhou.

So not only were the eight teams in each group based in those cities from July — five months late because of the coronavirus outbreak — but players, coaches, referees and federation officials were sharing the same hotel complexes, unable to leave, except to take the bus to the stadium on match days.

“Football is a sport with many surprises and in this special time and special environment, I don’t need to fly anywhere,” Ahmedov told news site Sohu.com of the unusual circumstances of his move. “I just changed buildings and completed a transfer ... No problem.”

The first phase of the competition was staged between July 22 and Sept. 28 before a brief recess ahead of the second phase, which started last Friday.

Apart from some time earlier this month, most players and staff involved have been unable to see family members as the federation aims to keep the league as safe as possible. So far it has worked, with no positive cases reported from the regular testing for coronavirus inside the bio-security hubs. But it has presented head coaches such as Afshin Ghotbi of Shijiazhuang Ever Bright with new challenges.

“Logistically, it has been amazing to see eight teams in one location, it is like three World Cups back to back,” Ghotbi told the Associated Press. “All these people get fed three times a day every day. We see each other in the gym and at breakfast sometimes.

“Most teams have their own areas and keep to that, though the coaches do chat to each other even if it is mostly small talk.”

Ghotbi’s team last Saturday beat Dalian Pro, a team guided by former Liverpool and Real Madrid coach Rafa Benitez, in the first leg of a relegation playoff series. Ghotbi said the seclusion does have some advantages for coaches.

“Staff can use the time to analyze opponents and plan tactics but with games almost every four days, the situation has been tough for players,” the American-Iranian coach added.

The clubs have tried to provide entertainment by installing billiards and mahjong tables as well as karaoke machines in the hotel headquarters, but Shanghai Shenhua coach Choi Kang-hee knows that the season has been demanding for all involved.

“They are here all the time and many miss their families,” Choi said. “It is a unique situation and we try to help them as much as possible. There are many games to be played which makes it difficult both physically and mentally.”

For Ghotbi, as is often the case in soccer, when the situation is going well on the field, it helps off the field.

“Losing in this situation can be like poison," he said. “When you are winning people don’t talk too much but there are more opinions expressed when you lose.”

At least the players from Shijiazhuang, as well as 11 other Chinese clubs, know the season will finally finish on Nov. 12.

But for Choi’s Shanghai Shenhua team — as well as Guangzhou Evergrande, Shanghai SIPG and Beijing Guoan — there is more of the same to come in Qatar.

As soon as China's domestic season finishes, the four clubs will be competing in the delayed eastern conference of Asian Champions League from Nov. 18 and will be confined to hotels and stadiums once again.

The Asian Champions League group stage will finish early next month but the two teams that reach the final on Dec. 18 will face a long time away from home and family.