Back in Business: WrestleMania ready to rumble with fans 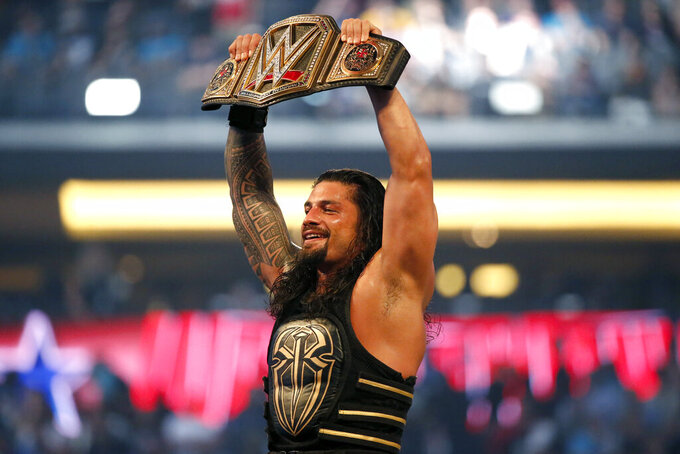 FILE - In this April 3, 2016, file photo, Roman Reigns holds up the championship belt after defeating Triple H during WrestleMania 32 at AT&T Stadium in Arlington, Texas. WWE is set to welcome back fans for the first time in more than a year when 25,000 fans are expected on both Saturday, April 10, 2021 and Sunday nights for WrestleMania at Raymond James Stadium in Tampa, Fla. (Jae S. Lee/The Dallas Morning News via AP, File)

His time due as the next face of WWE, Drew McIntyre imagined what his crowning achievement would look like in the build toward last year’s WrestleMania in his American hometown of Tampa, Florida.

“I beat ‘The Beast’ Brock Lesnar, I raise the title, I jump into the crowd,” he said.

Then, silence. No pyrotechnics, no fans — digital, cardboard or packed in seats — no members of his family sitting ringside to celebrate with the Scottish-born star.

The mania was muted.

Banished from the scheduled site at Raymond James Stadium, WWE ran its signature event inside an empty training facility in Florida.

“The pandemic hits. I get a little angry, disappointed, frustrated when I found out it was going to be in the performance center,” McIntyre said.

A year later, McIntyre gets a chance to do it again.

WWE is set to welcome back fans for the first time in more than a year when 25,000 of the catchphrase-yelling, replica championship belt-wearing, sign-holding diehards are expected on both Saturday and Sunday nights at Raymond James Stadium for WrestleMania.

“There’s nothing like seeing the fans in person and getting a redo in Raymond James Stadium,” McIntyre said. “They’re going to blow the roof off, if there’s even a roof.”

The company built on the purported 24-inch pythons of Hulk Hogan navigated a pandemic year with live shows held in its ThunderDome setup, where fans appeared on digital video boards and artificial crowd noise was pumped into the stadium for every match. Even without nonstop touring, WWE business has never been better: Already locked into long-term, billion-dollar TV deals with Fox and USA, WWE shifted its standalone streaming service to NBCUniversal’s Peacock streaming service for, yes, another billion-dollar contract.

That’s a truckload of fabulous moolah for a company whose ratings cratered during the pandemic, with just 1.701 million viewers watching the Mania go-home show Monday night on USA.

Often criticized for a heavy reliance on past stars in its marquee events, WWE has John Cena, Lesnar, Triple H, The Undertaker and Bill Goldberg sitting this one out. Becky Lynch and Ronda Rousey — the first female wrestlers to headline a WrestleMania main event, in 2019 — are at home. Bayley and Charlotte Flair aren’t advertised. The card, of course, in wrestling is always subject to change.

McIntyre is back in the main event when he takes on WWE champion Bobby Lashley on Saturday. Roman Reigns defends the Universal championship in a triple-threat match against Edge and Daniel Bryan in Sunday’s big match.

Lashley headlines WrestleMania 37 after serving as Donald Trump’s hand-picked representative for a “Battle of the Billionaires” match against Umaga and his rep, WWE CEO Vince McMahon, in 2007. The 44-year-old Lashley enters WrestleMania in the rarified air of Black champions in an industry that historically cast minorities as stereotypical performers. This year, people of color fill the card, with Lashley, The New Day’s Kofi Kingston and Xavier Woods, and the Smackdown women’s championship match pitting champion Sasha Banks vs. Bianca Belair among the handful of matches with representation.

“Of course, everybody right now is saying there’s a lot of African-American or Black people in these big, high-profile matches and that’s understandable because it wasn’t something that was very prevalent before,” Lashley said. “Now, since you see it more, if it happens next year it won’t be one of those things where people are asking me the question because it’s just going to be natural. We have everybody. Everybody can be represented in WrestleMania.”

The list of celebrities — kicked off at the first WrestleMania in 1985 when Mr. T competed in the main event — includes YouTuber Logan Paul, rapper Wale and singers Ashland Craft and Grammy-winner Bebe Rexha. Those entertainers aren't pulling up the wrestling boots and looking for a fight. But Bad Bunny, the 27-year-old Puerto Rican rapper-singer who won a Grammy and performed on “Saturday Night Live” this year, is set for a tag-team match with his partner Damian Priest against The Miz and John Morrison.

“As much work as he puts into his music career, and his entertainment career, he’s putting all that into his WWE appearances,” The Miz said. “A lot of celebrities don’t take the time to learn the art of professional wrestling. It’s not that they don’t have the respect. They don’t have the knowledge. They’re so busy in everything else that they’re doing.”

The Miz missed WrestleMania last year because of COVID-19 protocols and McIntyre was sidelined this year when he tested positive. WWE is seating fans this weekend in pods and, unlike past WrestleManias that sold out football stadiums in record times, seats were still available Friday on Ticketmaster’s website for the event co-hosted by Hogan and Titus O’Neil.

Wrestling fans are ready, to cheer, boo, pop their eyes at WrestleMania moments and each unpredictable finish after a year on the sidelines. Maybe McIntyre will get to raise a championship belt in front of crazed fans, after all.

“The fact we get Round Two,” McIntyre said, “it’s pretty incredible.”