Back on ice: Some US sliders finally able to begin seasons 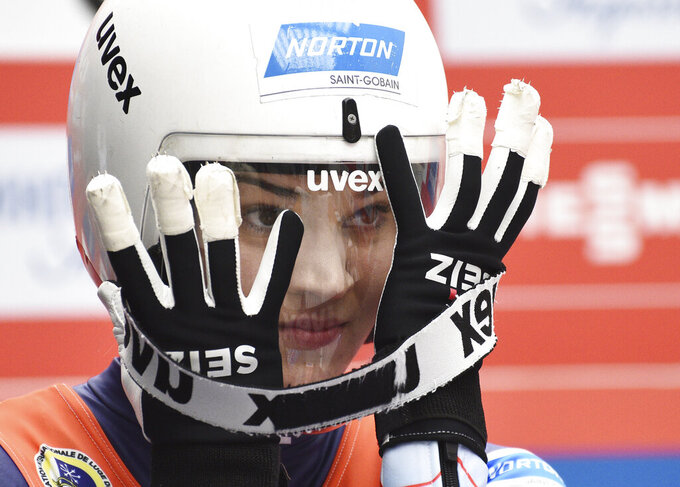 Some U.S. luge, bobsled and skeleton athletes have rejoined the international World Cup sliding circuits, after they all stayed home for the first half of the season because of issues related to the coronavirus pandemic.

There are some exceptions: most athletes and coaches who are members of the U.S. Army’s World Class Athlete Program will not be with their teams for the remainder of the season, a list that includes USA Bobsled coach Mike Kohn. The Army hasn’t signed off on letting soldiers in that program, which includes more than a dozen Olympic sports, compete yet while citing concerns about the rising numbers of positive COVID-19 cases both in the U.S. and around the world.

Friday marked the first day of actual international competition for American sliders, with USA Luge taking part in a Nation’s Cup race in Königssee, Germany. That was a precursor to this weekend’s World Cup races there, and seven of the eight U.S. sleds that competed qualified for races Saturday and Sunday.

USA Luge athletes and coaches all had to get three negative COVID-19 tests in a three-day span before rejoining the circuit, and the International Luge Federation has been able to pull off four race weekends already this season without any major virus issues.

“I am so happy to be back in the World Cup,” said USA Luge’s Summer Britcher, who was third in the women’s Nation Cup race Friday and was the top-ranked American in last season’s World Cup standings.

The U.S. bobsled and skeleton teams flew to Germany this week and will re-join the World Cup circuit in Winterberg on Jan. 9 and 10. Kohn, along with a handful of other coaches and USA Bobsled and Skeleton athletes, remained home to comply with the WCAP mandates for safety.

Brian Shimer will serve as the acting on-site head coach for bobsled, while Kohn will remain involved from his home in Lake Placid, New York, the team’s training base. A bright side for him: This will be the first time that he’s home for the birthdays for his wife and their two sons. He usually misses those because they all occur during sliding season.

“Just because you’re not on the World Cup racing, if you’re maximizing your opportunities back at home, there are gains that can be made,” Kohn said. “It frees me up to manage and direct and organize a lot of things that I wouldn’t be able to if I was in Europe right now.”

Many of the top U.S. sliders are now in Europe, a list that includes reigning women’s bobsled champion Kaillie Humphries, three-time Olympic bobsled medalist Elana Meyers Taylor, 2018 Olympic men’s luge silver medalist Chris Mazdzer and women’s luge world championship medalist Emily Sweeney. Lolo Jones, a three-time Olympian — two in track and field, one in bobsled — and seeking to make the 2022 Olympic team as a push athlete, is also among the Americans who were picked to compete this winter.

It is possible that some more Americans could head over for racing before the season ends. WCAP officials are monitoring the COVID-19 numbers and how the sliding sports are combating the virus regularly and will re-evaluate as needed. Sweeney is a longtime WCAP athlete; she’s competing this weekend because she’s not currently on orders.

“We’ve got to place the health and safety of the soldiers first,” said Willie Wilson, the WCAP chief. “When you’re competing or you’re actively involved in something, you’re laser-focused on accomplishing that goal. ... We’re having to make tough decisions right now and trying to make the right and best decision for the entire program.”