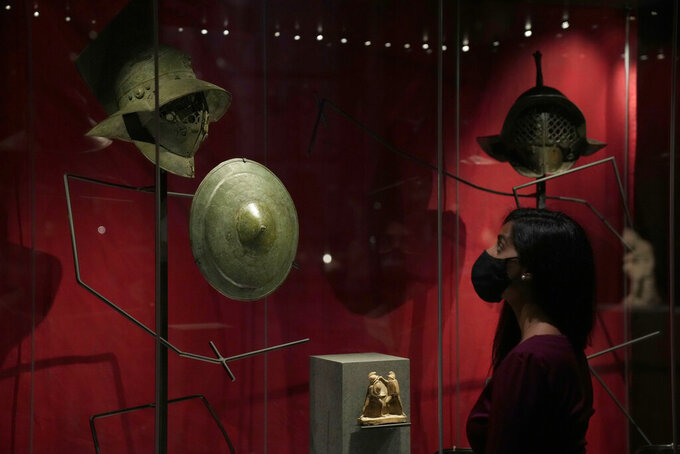 A museum employee poses for photographers next to Roman era gladiatorial helmets and a shield, during a media preview for the "Nero: the man behind the myth" exhibition, at the British Museum in London, Monday, May 24, 2021. The exhibition, which open to visitors on May 27 and runs until October 24, explores the true story of Rome's fifth emperor informed by new research and archaeological evidence from the time. (AP Photo/Matt Dunham)

LONDON (AP) — The British Museum’s new exhibition on the Roman Emperor Nero opens with a piece of fake news from the ancient world.

Visitors are greeted with an image of Peter Ustinov as Nero in the movie “Quo Vadis” strumming a lyre — a famous image of the cruel tyrant who notoriously fiddled while Rome burned.

But, the exhibition says, that tale is a myth. As such, it’s a fitting introduction to an emperor whose story was largely written by enemies after his death, creating what curator Francesca Bologna calls “the Nero we love to hate.”

“Our goal here is to show that this, however popular, image is actually based on very, very biased accounts and therefore we should challenge it,” she said during a preview of the exhibition Monday.

“Nero: The Man Behind the Myth” opens to the public on Thursday, six months later than originally planned as a result of the coronavirus pandemic. The show, which runs until Oct. 24, arrives the week after U.K. lockdown restrictions were lifted and London’s museums were allowed to reopen at limited capacity.

The exhibition draws on the British Museum’s vast trove of Roman artifacts, as well as items from collections in Italy, France, Germany and other countries, loaned despite pandemic-related restrictions.

“Everyone throughout Europe and the U.K. came to our rescue,” Bologna said. “They were really understanding. They helped us throughout the process. Even colleagues that were in lockdown themselves and working from home, they were incredible.”

Through more than 200 artifacts including statues, helmets, weapons, jewelry and ancient graffiti, it depicts a young ruler with rock-solid imperial lineage; Nero was the great-great-grandson of Rome’s first emperor, Augustus. In A.D. 54, at the age of 16, he became emperor of a Rome that was unrivalled in power but beset by problems, including war with the Iran-based Parthian empire in the east and an uprising led by Celtic queen Boudica in newly conquered Britain to the west.

One vivid section deals with the harsh reality of life in Roman Britain: there are lead ingots mined in Wales, along with thick chains that bound slaves who did the hard work. There’s also a bronze head of Nero, found in an English river after his statue was toppled during the uprising, and a family’s hoard of coins and jewelry, hidden for safekeeping during the violence and discovered in 2014 under the floor of a store in the east England town of Colchester.

Evidence suggests Nero was popular during his reign. He oversaw grand public projects, strengthening links between the city and its harbor to secure the food supply, building a public market and a spectacular set of public baths. He sponsored lavish public entertainments with gladiators, lion-wrestling and chariot races. He even competed in the races at Rome’s Circus Maximus, and was the first emperor to perform onstage.

The youthful emperor was also a style leader, popularizing a boyband-style haircut that the exhibition calls “dashing yet refined.”

He didn’t start the fire that leveled parts of Rome in A.D. 64, and neither did he fiddle as it burned. He wasn't even there at the time.

Afterwards, Nero rebuilt the city, brought in tougher building codes -- and also built himself a lavish palace, the Domus Aurea, or Golden House. Little of it remains, but the exhibition gives a taste of its opulence.

Beset by conspirators, Nero killed himself at the age of 30. His death sparked a period of civil war and then a new ruling dynasty. Like politicians down the ages, the new rulers blamed Rome’s problems on their predecessor.

Almost 2,000 years later, Nero remains a metaphor for bad government. As classicist Mary Beard wrote recently in the Daily Telegraph, “there is hardly a political cartoonist who doesn’t occasionally dress up a modern leader with a toga, laurel wreath and lyre, against the background of smoking ruins, to make the point that he is not taking some contemporary crisis seriously.”

Nero’s rule was undeniably brutal: He had his mother killed, along with one and possibly two of his wives. But was he more violent than other Roman rulers?

“Not really,” Bologna said. “Each and every emperor had people condemned and put to death. Even Augustus, who is the epitome of the good emperor, came to power in a really bloody way.”

This story has been corrected to show that Nero's relationship to emperor Augustus was great-great-grandson, not great-grandson.