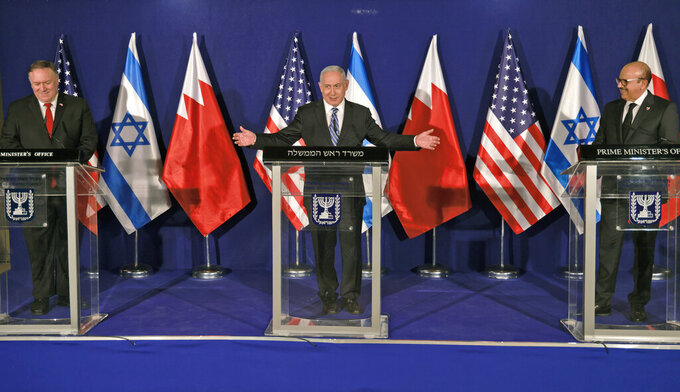 JERUSALEM (AP) — Bahrain's foreign minister paid a history-making visit to Israel on Wednesday, in the latest sign of warming ties following a series of U.S.-brokered normalization accords between Israel and Arab nations.

Foreign Minister Abdullatif bin Rashid Alzayani flew into Tel Aviv on a Gulf Air passenger plane, making him the first Bahraini minister to make an official visit to Israel. He held a series of meetings with top officials, capped by joint talks with Prime Minister Benjamin Netanyahu and the visiting U.S. secretary of state, Mike Pompeo.

At a joint news conference, all three men warmly praised the “Abraham Accords,” the U.S.-brokered agreements between Israel and the United Arab Emirates, Bahrain and Sudan.

Netanyahu called the visit a “milestone,” while Pompeo said the accords sent a message to Iran and its allies that “their influence in the region is waning and they are ever more isolated.”

Alzayani said his country's agreement with Israel, signed at the White House in September and cemented by a visit last month by an Israeli delegation, would lead to cooperation in areas like trade and education, and direct flights and the opening of embassies in the near future.

“It has been obvious the intention and keenness of all sides is to ensure that the peace we are pursuing will be a warm peace that will deliver clear benefits to our people," Alzayani said.

He also said he hoped the agreement would help pave the way for peace throughout the region.

But, he said, “in order to achieve and consolidate such a peace, the Palestinian-Israeli conflict needs to be resolved. I therefore call for both parties to get around the negotiating table, to achieve a viable two-state solution, as is also sought by the international community.”

The Palestinians have condemned Bahrain and the United Arab Emirates for reaching agreements with Israel, accusing them of weakening the traditional Arab consensus that normalized ties could not take place without the establishment of an independent Palestinian state.

Despite Alzayani's mention of the Palestinians, neither Bahrain nor the UAE has given any indication it plans on pushing the issue with Israel.

The Palestinians severed ties with the Trump administration after it recognized contested Jerusalem as Israel's capital three years ago, and they have rejected Trump's Mideast plan, saying it unfairly favors Israel. The Palestinians have welcomed the election of President-elect Joe Biden and expressed hope the incoming administration will take a more evenhanded approach.

Earlier, Alzayani was welcomed on the tarmac by his Israeli counterpart, Gabi Ashkenazi, and other U.S. and Israeli officials. Everyone wore masks and tapped elbows in greeting due to concerns about the coronavirus.

Ashkenazi said they hope to celebrate the opening of embassies by the end of the year.

He also welcomed the decision of the Palestinian Authority to restore ties with Israel that had been cut off earlier this year over Israel's plans to annex parts of the occupied West Bank. Israel put those plans on hold when the United Arab Emirates agreed to normalize ties in August.

Bahrain followed the UAE in agreeing to establish full diplomatic ties with Israel earlier this year. The breakthrough reflects a changing Middle East in which Israel and the Gulf countries view Iran as a shared threat that eclipses the decades-old conflict with the Palestinians.

Sudan also agreed to establish ties with Israel as part of a larger agreement with the United States that will pave the way for much-needed foreign aid following last year's overthrow of longtime President Omar al-Bashir.

The Trump administration hailed all three agreements as historic breakthroughs in the lead-up to the election. Joe Biden also welcomed the agreements, and is expected to build on them as he presses Israel and the Palestinians to return to peace negotiations.

Before this year's accords, only Egypt and Jordan had recognized Israel, as part of peace treaties negotiated more than 25 years ago. Israel hopes to cultivate much warmer ties with the Gulf countries, aiming for cooperation across various fields, including tourism and public health.