Ballots to be shipped to voters to promote mail-in voting 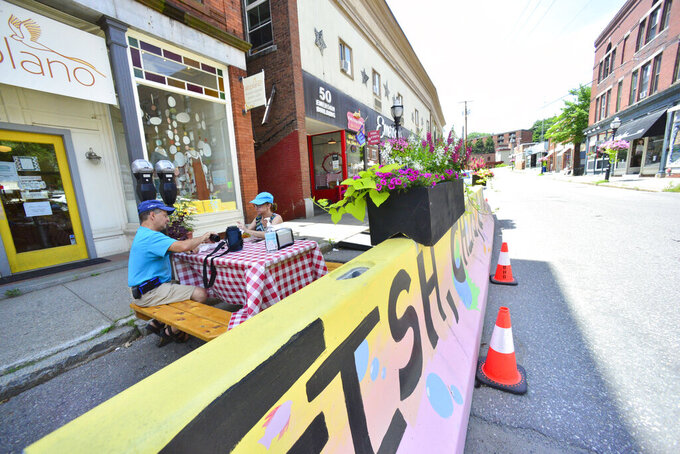 Lori and John Basile enjoy a meal from Elliot Street Fish and Chips in one of the dining areas that was created in a parking spot in Brattleboro Monday, July 20, 2020. The outdoor seating was created to help with social distance during the COVID-19 pandemic. (Kristopher Radder, Brattleboro Reformer via AP)

The state of Vermont is going to send ballots to all active registered voters as a way to encourage voting in the November election while keeping people safe from the coronavirus pandemic, Vermont's top election official said Monday.

Vermont Secretary of State Jim Condos on Monday issued the formal rules the state will follow when voting in the 2020 General Election.

Condos said voting by mail is simple, safe, and secure.

“When it comes to something as important as our elections, we must always plan for the worst,” Condos said. “Our state and national health experts have been very clear: There is no way to predict the status of the virus in November or in the weeks and months between now and election day.”

The 2020 Statewide Elections Directive is a result of laws passed by the Legislature this year that allows mail-in voting during the November election as a way to encourage voting during the COVID-19 pandemic.

Voters can return the ballot by mail, bring it to their town or city clerks, or cast that ballot at the polls on Election Day.

Under the directive, there are limits on when candidates can return ballots to town or city clerks it allows the early processing of ballots by the clerks.

Earlier this month the state sent out postcards to all of the state's voters so they could request a mail-in ballot for the Aug. 11 primary or the November General Election.

As of Monday, 108,700 had been returned to voters' town or city clerks, a record, Condos said.

Some people are skeptical of voting by mail, saying it could produce election fraud, Condos said. While voter fraud does occur, it is rare and in most cases, the perpetrators are caught and prosecuted.

“I welcome that skepticism," he said. “We should all care about the integrity of our elections.”

On Monday, the Vermont Health Department reported officials had reached 63 of the 64 people who tested positive using an antigen test at the Manchester Medical Center since July 10.

Of those, two cases were confirmed with the test used by the Health Department as being infected with the virus that causes COVID-19, four cases are probable, 57 were not COVID-19 cases and one remains unknown.

In May, Quidel Corp., of San Diego, became the first company in the country to win an emergency authorization from the Food and Drug Administration for a COVID-19 antigen test. Company spokesman Ruben Argueta said via email Monday that the Manchester Medical Center was one of its customers.

"We have only recently become aware of the current issue that was mentioned although it has not yet been formally reported into Quidel," Argueta said after being asked about the Vermont cases. “Our process is to thoroughly investigate complaints in order to determine the root cause of the issue. Until we have been notified and can begin and complete an investigation, we are unable to specifically comment.”

A message left at the medical center Monday seeking comment was not immediately returned.

After officials were notified of a possible outbreak in southern Vermont, the health department collected 1,423 samples from people in the Manchester area and other parts of southern Vermont. Of those, one additional person tested positive.

“So far, as the vast majority of these cases have been determined not to be a case of COVID-19, we do not believe COVID-19 is spreading in the community,” Health Department spokesman Ben Truman said in a statement.

On Monday, the health department reported 10 new cases of the virus that causes COVID-19, bringing the statewide total since the pandemic began to more than 1,350.

Vermont has not reported a COVID-19 fatality in more than a month. The number remains at 56.