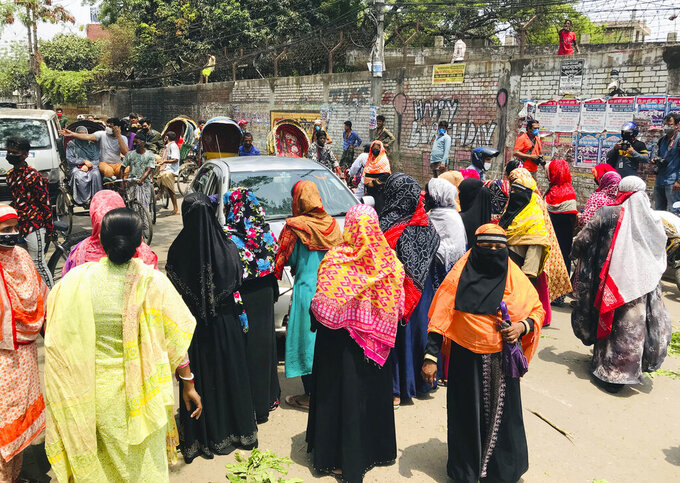 Bangladeshi garment workers block a road demanding their unpaid wages during a protest in Dhaka, Bangladesh, Thursday, April 16, 2020. Hundreds of Bangladeshi workers who produce garments for global brands protested in Dhaka and blocked a highway outside the capital on Thursday to demand unpaid wages during a nationwide lockdown that has forced most factories to suspend operations. (AP Photo/Al-emrun Garjon)

DHAKA, Bangladesh (AP) — Hundreds of Bangladeshi workers who produce garments for global brands blocked a highway at a protest demanding their unpaid wages during a nationwide lockdown that has forced most factories to suspend operations.

“The government should take care of us, I did not get my wages for the last two months,” said a 21-year-old woman who refused to give her name for fear of retribution from factory owners.

A leader of the factory owners’ association blamed global brands for abruptly canceling orders from many factories.

Protests were reported in several parts of Dhaka, including in Kamlapur and Mirpur, while hundreds of workers blocked a highway outside the capital, disrupting vehicles carrying produce.

Bangladesh’s textile industry accounts for nearly 85% of the nation’s $40 billion in annual exports and employs nearly 4 million workers, mostly women from rural areas. It is facing serious trouble after global brands including Wal-Mart, H&M and Marks & Spencer canceled orders because of the coronavirus pandemic.

Rubana Huq, president of the Bangladesh Garment Manufacturers and Exporters Association, said almost 87% of workers have been paid despite the industry's mammoth challenges.

Orders worth $3.2 billion have been canceled by global brands, affecting 2.26 million workers, according to the association.

“At a time when the buyers are canceling, paying late and asking for discounts even from their existing big suppliers, the smaller ones, including those who subcontract and supply to both traditional and non-traditional markets, are facing liquidity problems,” Huq said.

“Without active buyers’ support of these small factories ... solving their cases will be a problem,” she said.

But she said they would resolve the issue so that workers get their wages.

Prime Minister Sheikh Hasina announced about $590 million in low-interest loans for owners of export-oriented factories affected by the virus so they can pay workers their wages.

Bangladesh, which has the second-largest apparel industry in the world after China, is under a nationwide lockdown until April 25.