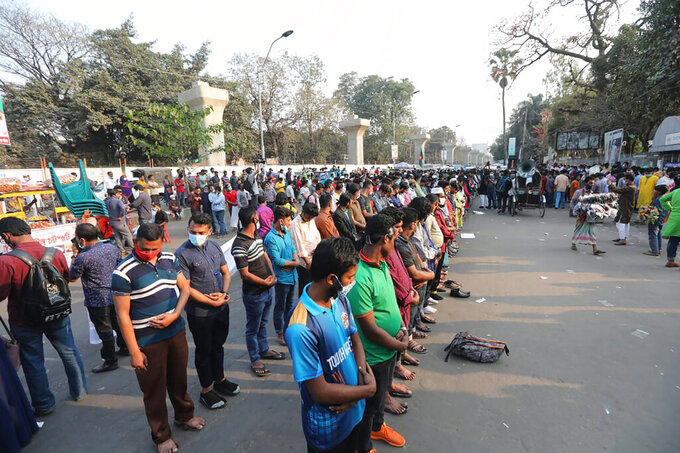 Protesters offer Friday prayers as they protest the death in prison of a writer who was arrested on charges of violating the sweeping digital security, in Dhaka, Bangladesh, Friday, Feb. 26, 2021. Mushtaq Ahmed, 53, was arrested in Dhaka in May last year for making comments on social media that criticized the Prime Minister Sheikh Hasina government's handling of the coronavirus pandemic. He had been denied bail at least six times. (AP Photo/Mahmud Hossain Opu)

DHAKA, Bangladesh (AP) — Protesters blocked a busy intersection in Bangladesh’s capital Friday to protest the death in prison of a writer and commentator who was arrested on charges of violating a sweeping digital security law that critics say stifles freedom of expression.

Mushtaq Ahmed, 53, was arrested in Dhaka in May last year for making comments on social media that criticized the Prime Minister Sheikh Hasina government's handling of the coronavirus pandemic. He had been denied bail at least six times.

It was not immediately clear how Ahmed died on Thursday. Home Minister Asaduzzaman Khan said Friday an investigation would follow.

Hundreds of protesters gathered near Dhaka University's campus while many others took to social media to voice their anger. They chanted slogans demanding the repeal of the law and shouted “Justice, justice, we want justice!”

Police have said Ahmed attempted to tarnish the image of the nation or spread confusion.

The 2018 Digital Security Act includes a jail sentence of up to 14 years for any propaganda or campaign against the country’s independence war, its founding father Sheikh Mujibur Rahman, the national anthem or flag. It also says a person could be jailed for up to 10 years for destroying communal harmony or creating unrest or disorder.

The broad characterization of charges led Amnesty International to conclude the law “is plagued by a lack of clear definitions, explanations and exceptions, including repressive non-bailable penalties for at least 14 offenses.”

The government says the law is necessary to maintain order. Opposition parties and editors have warned that the scope of the law can be misused against critics.

The CPJ in a statement demanded the release from prison of Ahmed’s co-accused, political cartoonist Kabir Kishore, who was also arrested last year.

“Mushtaq Ahmed’s death in a Bangladeshi prison, where he never should have been detained in the first place, is a devastating and unconscionable loss,” said Aliya Iftikhar, CPJ’s senior Asia researcher. “The Bangladeshi government must allow an independent inquiry into how Mushtaq Ahmed died and move immediately to repeal the Digital Security Act, which it has used repeatedly and unjustly against journalists."