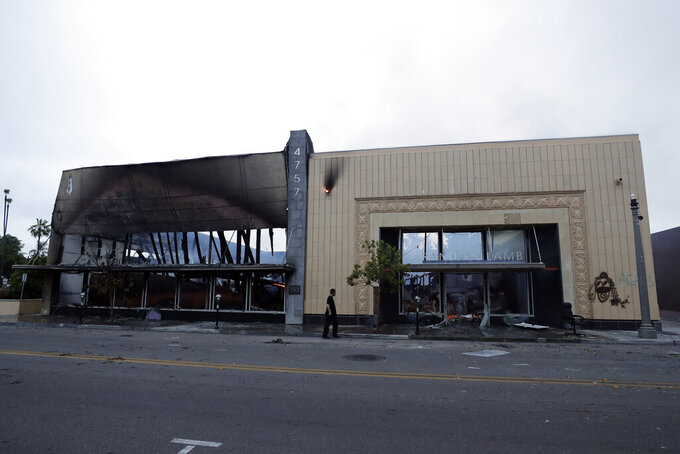 A man passes a burning building after a protest over the death of George Floyd, Sunday, May 31, 2020, in La Mesa, Calif. Protests were held in U.S. cities over the death of Floyd, a black man who died after being restrained by Minneapolis police officers on May 25. (AP Photo/Gregory Bull)

LA MESA, Calif. (AP) — Neighboring banks and a sleek, modern office building were burned to the ground by protesters in a San Diego suburb that was roiled last week by the arrest of a black man suspected of assaulting a police officer.

Chase and Union Bank branches across the street from the city's downtown trolley stop went up in flames. Two cars burned near City Hall.

City officials announced a curfew for Sunday night to try to head off more violence,

They threatened arrest for unlawful assembly for anyone who didn't leave and the crowd ultimately dispersed.

La Mesa, a city of 60,000 that borders San Diego, was the location for the protest because of an incident Wednesday that saw an officer repeatedly push a black man onto a bench at the trolley station after saying the man had slapped his hand, according to citizen video of the incident posted on social media. The man is argumentative and at one point tells the officer to “shut the (expletive) up."

Other officers arrive and the man is handcuffed. At one point the man tells an officer he's being arrested because he's black. “That's what the issue is," he said.

The video doesn't show the alleged incident that preceded the arrest.

La Mesa police have not released details and said the officer is on leave while it's investigated.

California Gov. Gavin Newsom addressed the incident at the start of his coronavirus briefing Friday.

“We've made a lot of progress in this state but, my gosh, I was reminded again even this morning, incident down in San Diego — young man on a bench,” Newsom said. “Details of that are insignificant in the context of ... the magnitude of incidents of that kind that persist all across this county, that are not part of the conversation on the nightly news.”

Saturday's protest drew hundreds. It started at the police department and moved through downtown. At one point demonstrators briefly blocked traffic on Interstate 8. As day turned to night it became increasingly chaotic and stores were vandalized and looted. The Chase bank went up in flames around midnight.

Ally Kaiahua said she was exposed to tear gas as police attempted to disperse crowds.

“I think people are hurting and they’re angry and they’re trying to be heard because there’s no other way to get anyone’s attention,” Kaiahua, a 35-year-old white San Diego resident, said of the property damage. “It’s unfortunate but this has been part of our history and how things get done because they don’t listen any other way.”

Hundreds of volunteers with brooms filled the streets Sunday morning to clean up shattered glass and debris. Some painted over storefront graffiti, even though the colors didn't match.

La Mesa borders El Cajon, where the fatal shooting of a black man by a police officer triggered days of unrest in 2016.

This story has been updated with the correct spelling of George Floyd's first name.