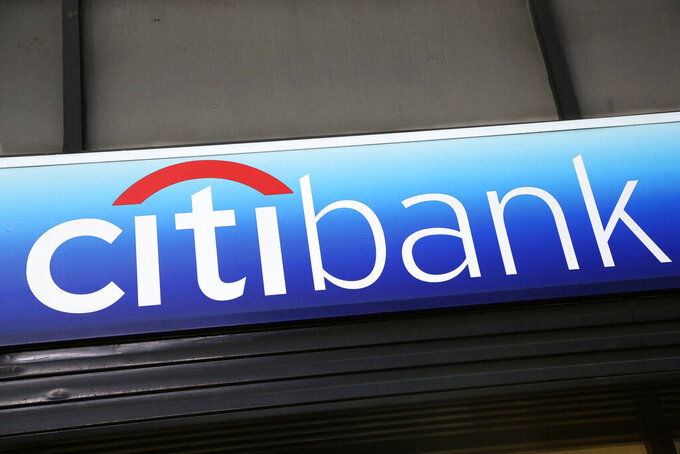 FILE - In this Jan. 15, 2015, file photo, a Citibank sign hangs above a branch office in New York. The tens of millions of consumers and businesses out of work from the coronavirus pandemic weighed heavily on the financial results of Wall Street’s biggest banks on Tuesday, July 14, 2020, with the likes of JPMorgan Chase, Wells Fargo and Citigroup setting aside tens of billions of dollars to cover potentially bad loans that were just fine only a few months ago. (AP Photo/Mark Lennihan, File)

NEW YORK (AP) — With tens of millions of Americans out of work and many businesses shut down or operating under restrictions due to the coronavirus, three of the nation's biggest banks set aside nearly $30 billion in the second quarter to cover potentially bad loans that were fine only a few months ago.

The results from JPMorgan Chase, Wells Fargo and Citigroup on Tuesday offer perhaps the broadest glimpse yet into how badly the pandemic is impacting the financial health of American consumers and businesses. Bank executives, in conference calls with analysts and reporters, said they underestimated how long the pandemic would last and its impacts on the overall economy.

Thanks largely to the funds set aside for bad loans, JPMorgan's profit fell by half in the April-June quarter, Citigroup's sank about 70% and Wells Fargo reported its first quarterly loss since the financial crisis of 2008.

Back in April the talk among many economists and Wall Street analysts was that the U.S. economy was going to go through a “V-shaped” recovery: the shutdowns and stay-at-home orders would cause massive job and business losses, but once reopened, things would quickly return to normal.

That scenario has not played out.

The U.S. coronavirus pandemic is now in month five, with infections hitting records in Florida, Texas and California, causing state and local authorities to again shut down parts of their economies. The trillions of dollars in economic support passed in April to keep Americans and businesses afloat is now mostly running out. Enhanced unemployment benefits expire at the end of the month unless Congress acts, and at this point many consumers are upward of 90 days past due on debts that would be in collections if it wasn’t for government and bank-sponsored forbearance programs.

Bankers now seem to be bracing for the economy to keep struggling in the months ahead. The efforts to reopen local economies across the U.S. have contributed to the growing number of infections. California, the nation's most populous state, on Monday scaled back many of its reopening initiatives as virus cases, hospitalizations and deaths all rise.

The Federal Reserve last month told the nation’s biggest banks to brace for a potential double-dip recession, with things deteriorating once again later this summer and into fall.

“The pandemic has a grip on the U.S. economy and it doesn’t look like things will get better until a vaccine is available,” said Michael Corbat, the CEO of Citigroup, in a call with investors.

In a call with reporters, JPMorgan Chief Financial Officer Jennifer Piepszak said the bank now expects “a much more protracted downturn” than what it forecast back in April.

“Despite some recent positive macroeconomic data and significant, decisive government action, we still face much uncertainty regarding the future path of the economy,” JPMorgan Chase CEO Jamie Dimon said in a prepared statement.

In its second-quarter results, JPMorgan said it set aside $10.5 billion to cover potentially bad loans. That’s on top of the $8.3 billion the bank set aside in April, when the pandemic was only just starting to impact the U.S. economy.

“Our view of the length and severity of the economic downturn has deteriorated considerably from the assumptions used last quarter,” said Wells Fargo’s CEO Charlie Scharf in the company's earnings release.