Barcelona waits on authorities before vote against Bartomeu 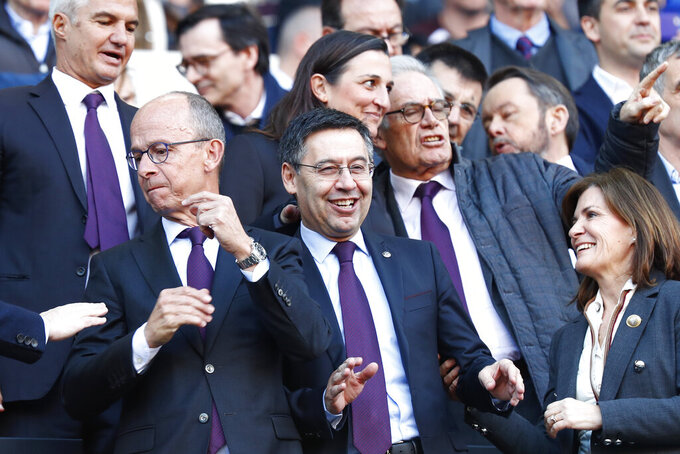 MADRID (AP) — Barcelona is waiting for authorization from local officials before holding a referendum that could lead to the ouster of club president Josep Bartomeu and his board of directors.

Club members have called for a motion of censure against Bartomeu and the board, but the club said Monday it can’t hold the vote until officials authorize it amid the coronavirus pandemic. More than 110,000 club members are entitled to vote, but the Spanish government last week declared a state of emergency because of a surge in the number of coronavirus cases.

“We asked how we could guarantee the safety for everyone, voters and workers,” Bartomeu said after the meeting of the board of directors on Monday.

The original plan was to have the referendum take place next week at the Camp Nou Stadium, but the club had yet to receive a formal answer from officials. Bartomeu said it wanted more time to schedule the vote in different locations instead of a centralized vote at the Camp Nou.

Many expected Bartomeu and his board to resign before the censure vote takes place. Bartomeu, however, said that resigning has not crossed his mind, reiterating his stance from last month.

More than 20,000 club members signed a petition for Bartomeu and his board to face the censure vote. The wave of opposition came after Lionel Messi told the club he wanted to leave amid one of its worst crises ever.

Messi criticized Barcelona club directors last season and said he did not like the direction the club was headed. He later personally accused Bartomeu of not keeping his promise to let him leave for free at the end of the season.

Bartomeu said he understood why Messi was disappointed but still hoped he would “stay with Barcelona for many years" and retire with the club.

“When I heard that Leo Messi is, well, angry because he wanted to leave the club, I’m trying always to explain to him and to his agents and to his family that, Barcelona, we cannot let Leo Messi leave,” Bartomeu said, in English. “Why? Because he is the best player of the world and because we are starting now a new project with Ronald Koeman, with new players, where Leo Messi is the key.

Pressure on Bartomeu increased after the team’s embarrassing 8-2 loss to Bayern Munich in the quarterfinals of the Champions League, one of the worst in the club’s history. The defeat prompted Bartomeu to announce big changes at the club and call for new presidential elections for next March. Barcelona went without a title last season for the first time since 2007-08.

“I think that when this season is over, we will have won more than one title,” Bartomeu said.

Bartomeu said that after the transfer window ended the club asked players to adjust their salaries amid the pandemic, and negotiations with them remained underway. He thanked Koeman for taking over the coaching job even though he knew “unpopular” measures would have to be made. Among Koeman's first moves was to get rid of veteran striker Luis Suárez and midfielder Ivan Rakitic.

The board also called for the Spanish soccer federation to review its video replay standards, reiterating its complaints after the VAR awarded a decisive penalty kick in the 3-1 loss to Real Madrid in this weekend’s Spanish league “clásico” at the Camp Nou.

The club said “VAR has not upheld the essential criteria of ethics and fairness, which has had a serious negative impact on FC Barcelona and has benefited its most direct opponents.”

Barcelona presented no evidence to back up the claim.