Barletta to decide soon on whether to run for governor 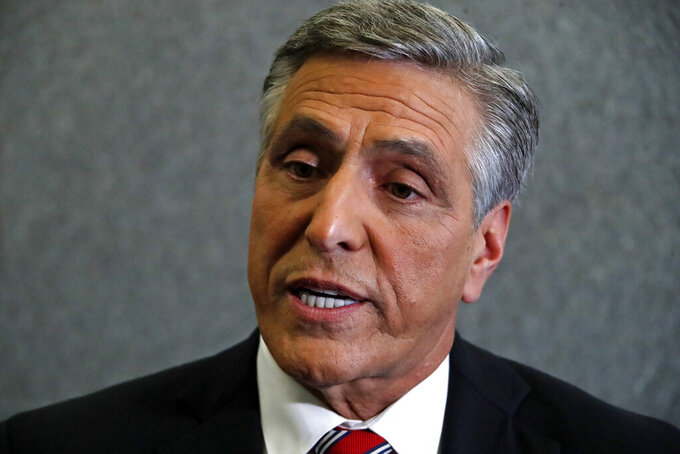 FILE - In this Oct. 26, 2018, file photo, Lou Barletta speaks after a debate in the studio of KDKA-TV in Pittsburgh. Barletta, a former congressman who unsuccessfully challenged U.S. Sen. Bob Casey in 2018, said Friday, March 19, 2021, that he will make a decision in the next few weeks on whether to seek the Republican nomination for governor of Pennsylvania in 2022. (AP Photo/Gene J. Puskar, File)

HARRISBURG, Pa. (AP) — Lou Barletta, the former congressman who unsuccessfully challenged U.S. Sen. Bob Casey in 2018, said Friday that he will make a decision in the next few weeks on whether to seek the Republican nomination for governor of Pennsylvania in 2022.

Barletta began considering a run late last year, after saying he was leaving electoral politics following his loss to Casey. Barletta was one of Donald Trump's most loyal backers in office, but was unable to make the race close against Casey and lost by 13 percentage points.

But Barletta, 65, said he felt the pull of running for office again during the coronavirus pandemic and seeing the hardship of business owners and people losing their jobs. He also said he is worried about what Biden's administration will mean for Pennsylvania's energy industries.

The final decision on whether to run, he said, is up to his family.

Barletta is a former four-term member of Congress and former mayor of Hazleton, where he still lives. He started a business consultancy after he lost to Casey, but didn’t leave politics entirely, and remained heavily involved with Trump’s unsuccessful reelection campaign in Pennsylvania.

If Barletta runs, he will almost certainly have competition for the Republican nomination.

Joe Gale, a Montgomery County commissioner, has said he is running, while second-term U.S. Rep. Dan Meuser, who lives near Barletta, and freshman state Sen. Doug Mastriano from Franklin County have said they are considering running.

The top federal prosecutor in Philadelphia appointed by Trump, William McSwain, has declined to comment publicly on whether he wants to run for governor.

But Republicans around the state — including Montgomery County's GOP chair, Elizabeth Preate Havey — say he has told them that he is serious about running for governor.

“Pennsylvania is starved for leadership right now and we clearly need to take the state in a new direction," McSwain said in a statement.

During his time as U.S. attorney, McSwain crossed swords with Democrats in Philadelphia over law enforcement policy, including going to court successfully to fight plans to open a medically supervised drug injection site. McSwain returned to private practice in January.

The office is open since Gov. Tom Wolf, a Democrat, is term-limited.

Attorney General Josh Shapiro is widely expected to seek the Democratic nomination and, because of his success in two statewide elections, has given pause to other Democrats thinking of running for the office.

Laughlin, who owned a home construction business before running in 2016, has won twice in a Democratic-leaning district and posted one of the more moderate voting records among Republicans in the state Senate, according to lifetime ratings through 2019 from the American Conservative Union.

In the past year, Laughlin reliably voted with Republican leadership on a slew of bills challenging Wolf's management of the pandemic, but also voted against leadership on a Republican effort to undo the Democratic majority on the state Supreme Court.

More recently, he has gone against Republican orthodoxy in introducing legislation to legalize marijuana and saying that he will introduce legislation to raise the minimum wage to $10 an hour.

In a statement, a spokesperson pitched Laughlin as a center-right conservative “who can win back the state and rebuild the economy in the wake of the Covid pandemic.”