Basketball in a mask? Rare but not unheard of in pandemic 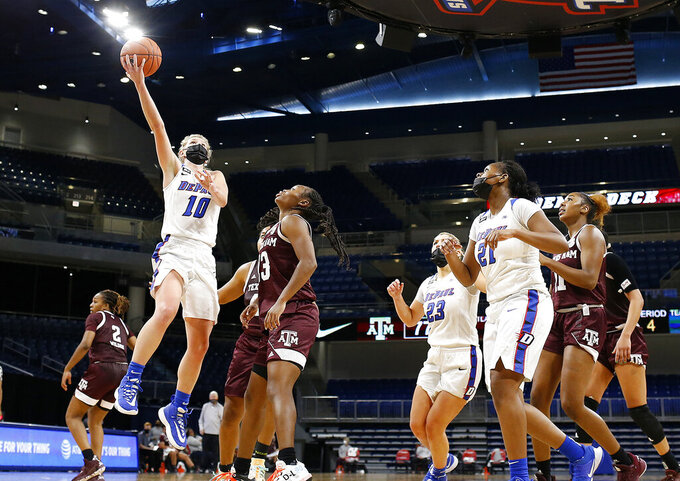 In this photo provided by DePaul Athletics, DePaul's Lexi Held (10) goes to the basket against Texas A&M as teammates Dee Bekelja (23) and Darrione Rogers (21) look on during an NCAA college basketball game on Saturday, Nov. 28, 2020, in Chicago. It's a common sight to see players and coaches wear masks on the sideline so far this season during college basketball games to help prevent the spread of the coronavirus. The DePaul and Creighton women's basketball teams are among a few squads that have taken it a step further with their players wearing the masks while they are on the court playing. (Steve Woltman/DePaul Athletics via AP)

It is not unusual to see players and coaches wearing masks on the sideline as the college basketball season gets going.

The DePaul and Creighton women's teams have taken it a step further: Their players are wearing masks while they are on the court competing.

“The first week I complained every day, but now it’s normal as we wear them every day in practice,” said Deja Church, a senior guard for DePaul. “It’s kind of normal now. I don’t like it, but whatever keeps us and the coaches and everyone safe is what matters most.”

The NCAA does not require masks on the court, though it recommends them on the bench along with social distancing guidance for its member schools and other steps to prevent the spread of COVID-19. But masks are still very uncommon in organized basketball and that is unlikely to change.

DePaul coach Doug Bruno said he took the advice of the school's medical staff. His 20th-ranked team has worn masks in every practice since Aug. 7 and played its first two games wearing them.

Creighton coach Jim Flanery said he left it up to his players to decide whether they wanted to wear masks in games. A majority of them are wearing them.

“Our contact tracer has told us it will be impactful in terms of contact tracing and determining whether we'd have to pause if someone on the other team tests positive,” Flanery said. “We gave (the players) the information and let them make the decision.”

Flanery said that he isn't sure how long his players will wear masks this season, but "if it gives us a greater opportunity to have everyone available or more people available if we're exposed, it's worth it.”

But does it making breathing more difficult? Experts say no.

“It’s doing very little, if anything, to your physiology," said Susan Hopkins, a professor of medicine and radiology at the University of California San Diego School of Medicine.

"All of the evidence we’ve been able to assemble is that it’s your perception of breathing that it affects. Some people may find that distressing,” said Hopkins, who specializes in exercise physiology and the study of lungs under stress. “After three months practicing in it, most athletes should be used to it."

Some schools have worn masks during warmups and found them to be uncomfortable.

“When we first got here, we tried the mask thing and good lord, it felt like we were in Denver (at high altitude),” Michigan men's basketball senior forward Isaiah Livers said after scoring 22 points in an 81-71 win over Oakland on Sunday.

Flanery did point out that masks have made communication harder for players amongst themselves on the court and with coaches.

“With the testing that we’re doing here, with what we’re doing at home where we get tested three times a week ... No, I’m not a big advocate of wearing a mask for the games,” said Dawn Staley, coach of No. 1 South Carolina

“We haven’t talked about it (wearing a mask while playing),” Gonzaga senior Jill Townsend added. “I don’t think as a team we feel the need to wear a mask out there, that we’re at risk.”

The Blue Demons and Bluejays are in the minority now as far as wearing masks during games, but that could change depending on the pandemic. Some schools didn't even know it was an option.

“I didn’t even really know we could play with masks on,” N.C. State sophomore Jakia Brown-Turner said. She said she asked an assistant coach about it.

“I think it’s kind of a good idea if cases keep on rising,” she said.