Batter up: Things to know about NCAA baseball regionals 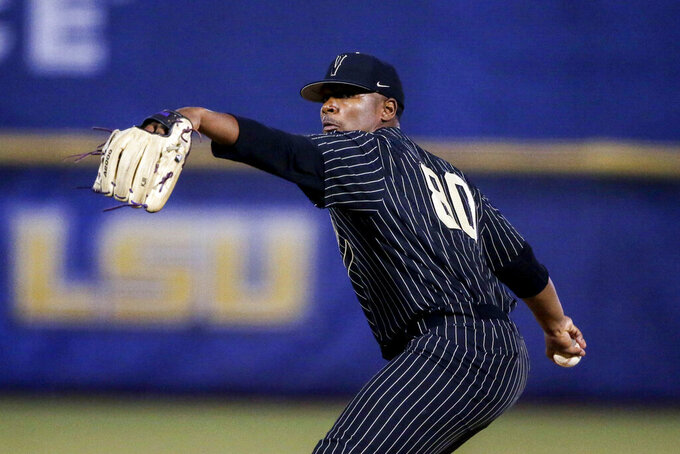 Vanderbilt pitcher Kumar Rocker throws to an Arkansas batter during the first inning of an NCAA college baseball game during the Southeastern Conference tournament Thursday, May 27, 2021, in Hoover, Ala. (AP Photo/Butch Dill)

OMAHA, Neb. (AP) — The NCAA baseball tournament, canceled last year because of the COVID-19 pandemic, opens Friday with play in 16 double-elimination regionals. Regional winners advance to best-of-three super regionals next week, and the final eight go to the College World Series in Omaha beginning June 19. Some of the top story lines:

VCU is on a 21-game win streak that's the nation's longest and a program record. Don't count out the Rams. They made it to super regionals in 2015, their most recent tournament appearance. Freshman third baseman Tyler Locklear is the Atlantic 10 player and rookie of the year.

Wright State and Duke, which as the No. 9 seed won its first ACC Tournament, each are on 12-game win streaks.

Arizona State, the No. 2 seed in the Austin Regional, comes in on its first three-game losing streak of the season. The Sun Devils were swept for the first time this season, by UCLA, and their 3-0 loss Sunday marked the first time they've been shut out.

Kumar Rocker is back. The Vanderbilt sophomore dazzled on the national stage in the 2019 tournament, pitching a no-hitter against Duke in super regionals and being named CWS Most Outstanding Player. He got roughed up by Arkansas in the SEC Tournament last week, but he enters regionals 11-3 with a 2.86 ERA.

Nevada senior first baseman Dillan Shrum leads the nation with a .479 batting average, is slugging .992 and is first in the Mountain West with 15 homers. He's gone deep five straight games and in eight of the last nine. He ended the regular season by going 12 for 15 with six homers, a double, 14 RBIs and 12 runs in four wins over San Jose State.

BEEN THERE, DONE THAT

Florida State, at 43 in a row, owns the longest active streak of NCAA appearances. Vanderbilt, at 15 straight, has the second-longest streak, followed by Florida (13). Texas is making its 60th appearance since 1947, most of any school.

LSU's Paul Mainieri will begin his 21st, and final, national tournament when the Tigers play Gonzaga in Eugene, Oregon. The 63-year-old Mainieri last week announced he would retire after a combined 39 seasons at St. Thomas, Air Force, Notre Dame and LSU.

Mainieri's 1,501 career wins are most by an active coach and seventh all-time. He's taken 12 of his 15 LSU teams to the tournament, five to the CWS, and won the 2009 national championship.

Fairfield will be without Metro Atlantic Conference player of the year Mike Caruso when the Stags play Arizona State in Austin, Texas. The senior catcher and team captain broke his jaw when he was hit by a pitch in practice. Caruso led the team and ranked ninth nationally with a .414 batting average, and his .532 on-base percentage is the highest in program history.

Kevin Kopps of No. 1 overall seed Arkansas has established himself as one of the best college relievers of all time. The SEC pitcher of the year on Thursday became the first reliever to be named Collegiate Baseball national player of the year in the 34 years the publication has given the award. The sixth-year senior is 10-0 with 10 saves in a team-high 66 1/3 innings — an amazing number for a closer — and his 0.81 ERA leads the nation. He has 105 strikeouts against just 15 walks.

Old Dominion leads the nation with 101 homers in 56 games, the most since Tennessee Tech went deep 135 times in 65 games in 2018. Three Old Dominion players have double-digit dingers, and nine have more than five.

Fairfield is first nationally with a 2.75 ERA and 1.03 walks/hits per innings pitched, Mississippi State averages 12.4 strikeouts per nine innings and Central Michigan has 10 shutouts among its 40 wins.

Dallas Baptist's Dominic Hamel (12-2) leads the nation in wins, Vanderbilt's Jack Leiter and Rocker have struck out 135 each to lead pitchers in the tournament, and UC Santa Barbara's Michael McGreevy has walked just 10 batters in 95 2/3 innings.

CURSE OF THE 1 SEED

Attention, Arkansas: The last No. 1 national seed to win the championship was Miami in 1999, the first year of the current tournament structure. Vanderbilt was a No. 2 seed when it won the title in 2019. The most recent No. 1 to reach the College World Series finals was Texas in 2009.