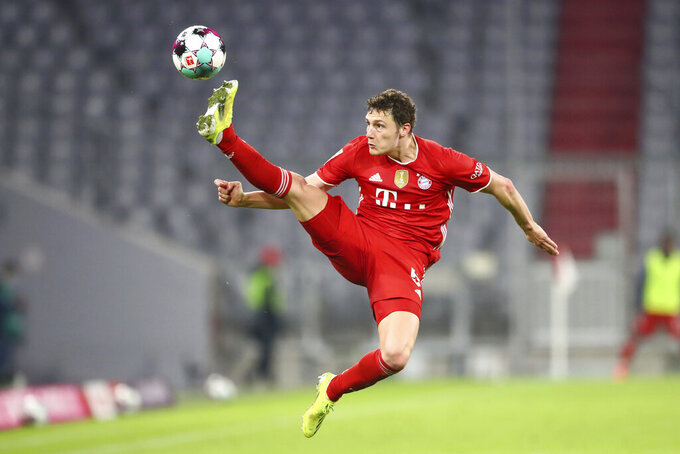 DÜSSELDORF, Germany (AP) — With Bayern Munich on the verge of winning yet another German league title, the problems are just beginning.

Bayern can clinch its record-extending ninth consecutive title on Saturday against Mainz, with three more games still to go. At the same time, Robert Lewandowski is chasing the league scoring record.

That's all a bit overshadowed, however, with Bayern coach Hansi Flick leaving and the future uncertain for the most famous club in Germany.

After Flick won every competition Bayern entered in his first year — Bundesliga, German Cup, Champions League, Club World Cup — the only way was down in his second season.

Winning the Bundesliga again has proved to be a straightforward task, but the Champions League was another story. Bayern pushed Paris Saint-Germain to the limit in the quarterfinals with a depleted squad. Without the injured Lewandowski, though, it was just too hard a task.

Even Pep Guardiola, once the Bayern coach but now the manager at Manchester City, calls Flick's squad “the best team in the world.”

So why is Flick leaving?

Flick's decision to quit, coupled with the coronavirus pandemic, means he will have won all those trophies without any cheers from the crowd at Allianz Arena. Home fans might have kept Flick in the job a little while longer if they had been there to back him in a reported power struggle with sporting director Hasan Salihamidzic.

Flick made his unhappiness with Salihamidzic's transfer strategy clear. He wanted reinforcements after last year's squad was weakened with the departures of Thiago Alcantara, Philippe Coutinho and Ivan Perisic. What Flick got was a mixed bag of largely underperforming signings.

Striker Eric Maxim Choupo-Moting is a competent backup for Lewandowski, but lacks the same cutting edge. Winger Douglas Costa barely played even before fracturing his foot in February. Defensive midfielder Marc Roca has 146 league minutes all season and Bouna Sarr has sometimes been third or even fourth choice at right back.

The fans have largely backed Flick, but Bayern management is firmly behind Salihamidzic. Club president Herbert Hainer justified the club's transfers because of the financial strain caused by the pandemic and said the criticism had gone too far.

“FC Bayern stands united and emphatically against hostility towards Hasan Salihamidzic,” Hainer said Thursday. “Objective criticism is, of course, always permissible. However, we condemn personal attacks and agitation in the strongest possible terms. There is no place in the slightest for that at FC Bayern.”

Flick's next move could be to the German national team, where Joachim Löw is leaving after this year's European Championship. Flick was Löw's assistant when Germany won the 2014 World Cup and knows the national soccer federation inside-out from his time as sporting director there.

Bayern could obstruct those plans, though. The club was publicly annoyed by Flick's decision to announce his departure last week. He's under contract through 2023, so Bayern could stop any talks about the Germany job.

“For as long as a coach has an ongoing contractual relationship, and as I understand it, that is still the case for Hansi Flick and FC Bayern, then we will not actively approach him," German national team general manager Oliver Bierhoff told Kicker magazine on Thursday.

Flick may have won every competition in sight at Bayern, but it doesn't mean he'll get his way.