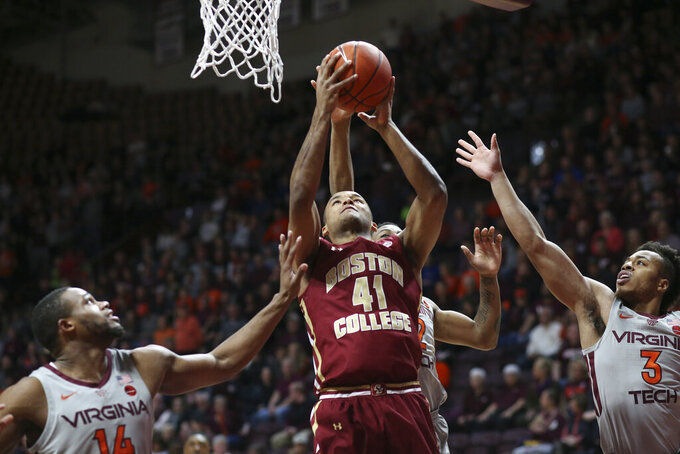 Looking to put a schedule together during the pandemic-altered season, he saw an opening after a team backed out and decided to put his program up against tough competition right away.

Still searching for his first NCAA Tournament berth with the school as he enters his seventh season, Christian lined the Eagles up to bus south to Mohegan Sun Arena in Connecticut for a tournament — their first two of four games at the building.

They’re set to open against No. 3 Villanova on Nov. 25 in the 2K Empire Classic, and on Thanksgiving Day the Eagles are scheduled to face either No. 2 Baylor or No. 18 Arizona State.

“When we had an opportunity to get into this tournament, I talked to them about it,” Christian said. “I told them, ‘I believe in you guys and I want to play the very best.’ Why not? Let’s go play. These kids have been through a lot. They’ve been through a lot of things over the last six months.”

This season will be the first time the Eagles open against a ranked opponent, and the earliest they’ll see a top-5 team since 2015 when they lost to Michigan State on Nov. 26.

BC is also scheduled to play St. John’s and Missouri at Mohegan before nonconference home games against Rhode Island and California.

After their season-ending loss to Notre Dame in the second round of the Atlantic Coast Conference tournament, players went home because of the COVID-19 pandemic. Christian was excited when they were able to get back together.

“Just the joy that they had when they were on the court was unbelievable, man. I won’t forget it,” he said. “It puts everything in perspective. It was just good to see them enjoy what was a little bit of what was normal for them, even with masks on.”

Senior forward Steffon Mitchell was excited to see his teammates after heading home to Minnesota, where he stayed until August. Now, he’s thrilled by the opportunity to open against stiff competition.

“That tournament is filled with great teams that I’m looking forward to playing,’’ he said. “I think our mindset is we’ll play anybody.”

Picked to finish next-to-last in the ACC, the Eagles are slated to begin league play Dec. 12 at home against Syracuse.

Wynston Tabbs, a 6-foot-2 junior guard who missed the last 18 months after a knee injury, is set to return.

“Just his inspiration that he’s back out there after what he had to go through, it’s truly inspiring,” Christian said. “I think he’s one of the best stories in college basketball, and he’s going to be because he’s back and playing the way he plays.”

Mitchell, a 6-8 forward, led the team in rebounding the past three seasons. Last year, his 2.2 steals per game ranked 14th nationally. He also averaged 3.1 assists and started to gain confidence offensively, something he looks to build on.

“There’s one thing about practicing it in an empty gym,” he said about his offense. “There’s another about proving it to yourself and proving it to other people across the ACC and across the country that this is no longer one of my weaknesses.”

BC landed a pair of grad transfers that Christian hopes will add outside shooting depth. The Eagles struggled against zone defenses last season.

Rich Kelly, a 6-1 guard from Quinnipiac, and Frederick Scott, a 6-8 forward from Rider, are expected to see extended minutes.

“They bring a stretch that we needed,” Christian said. “We needed to improve our perimeter shooting.”