Beam me up? Bavarian governor eyes top job after Merkel 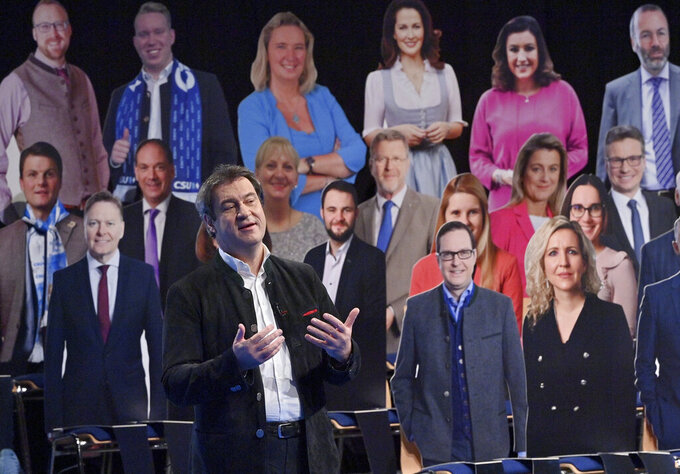 File - In this Wednesday, Feb.17, 2021 file photo, Bavarian Prime Minister Markus Soeder (CSU) speaks at the party's Political Ash Wednesday in front of cardboard audience in Passau, Germany. Markus Soeder is many things: state governor of Bavaria, Star Trek fan, a conservative for whom combating climate change is an article of faith. The question Germans are asking now is: can the 54-year-old win enough backing across the political spectrum to succeed Angela Merkel as chancellor in September. (Peter Kneffel/Pool via AP, file)

NUREMBERG, Germany (AP) — Markus Soeder is many things: the state governor of Bavaria, a conservative who believes in combating climate change, and a Star Trek fan.

The question Germans are asking now is: can the 54-year-old win enough backing across the political spectrum to succeed Angela Merkel as chancellor this fall?

Once dismissed as a provincial maverick with a penchant for picking fights and wearing outrageous Carnival costumes, Soeder was catapulted onto the national stage last year when the country's first coronavirus cases were confirmed in Bavaria. Over the past months he has loyally supported Merkel — whose cool-handed approach to the pandemic has been praised in Germany and beyond — forcefully defending lockdown measures even as other state governors wavered.

The pandemic “is a big test that we have to pass,” Soeder told The Associated Press in an interview during which he laid out the next steps in the conservative leadership race and spoke about his love for America — and dislike for Donald Trump.

Soeder's current beef is with the European Union's executive Commission, which he blames for the slow rollout of COVID-19 vaccines on the continent.

The EU, he said "ordered vaccines too late, too little and, I believe, too stingily. The approach to vaccines was the way that you might normally order paper clips.”

The Brussels-based body is a frequent punching bag for national politicians across the EU. But Soeder's criticism falls firmly at the feet of German Commission chief Ursula von der Leyen, a fellow member of the Union bloc in which Merkel's Christian Democrats and his Bavaria-only Christian Social Union are unequal partners.

Soeder's complaints carry weight due to the outsized role Bavaria plays in Germany: it is the country's biggest state and its economic powerhouse.

Born in Nuremberg, the son of a building contractor, Soeder has spoken of his early enthusiasm for conservative politics. While other students were protesting against what they considered U.S. imperialism, Soeder — who grew up near an American military hospital and regularly visited the Army store for pizza and ice cream — recalls attending a rally in favor of the first Gulf War.

“I stood not far from here on a wooden box and demonstrated for the United States,” he said.

Soeder said his love for America was tested by Trump, who regularly lashed out at allies such as Germany and threatened to pull out U.S. troops stationed there.

"Nobody who is a real fan of the U.S. understood why the United States, as a beacon of liberty, didn’t want to be by our side any longer,” he said, adding that he's encouraged by comments from the new Biden administration that it will keep the bases in Germany.

Soeder agrees that Germany should pay more for its defense — a U.S. demand that precedes the Trump administration.

Unlike most German politicians, the father of four is open about his Christian faith.

“I'm a believer,” he said at his office next to Nuremberg's gothic St. Lawrence Church. “I draw part of my strength from faith."

That faith also includes a conviction that protecting the environment is a religious duty.

“The preservation of creation is a conservative idea," he said, insisting that environmentalism and economic progress can go hand-in-hand. “It’s the same as with corona: the economic damage in the long run is much greater and much worse if we do nothing."

Soeder, whose state is home to automakers BMW and Audi, raised eyebrows when he suggested banning conventional combustion engines by 2035.

Roman Deininger, a journalist for the Munich daily Sueddeutsche Zeitung who has written a biography of Soeder, said the Bavarian governor is capable of making radical decisions when he recognizes they are necessary, even if he has to reverse his own position.

After the Fukushima nuclear disaster in Japan 10 years ago, Soeder — then Bavaria's environment minister — dropped his support for atomic energy.

Under pressure from the far-right Alternative for Germany party during a state election campaign three years ago, Soeder took an anti-migrant line. It backfired, contributing to his party losing its absolute majority in the Bavarian parliament.

This week Soeder, a skillful speaker who likes to draw colorful comparisons, attacked Alternative for Germany, accusing them of “hatred and incitement.”

“They belong in Mordor" — home to the evil Sauron in J. R. R. Tolkien’s “Lord of the Rings" fantasy books — he suggested.

The Union bloc will decide who to put forward for chancellor in the coming months. Merkel's party, which runs in 15 of Germany's 16 states, recently elected the governor of North Rhine-Westphalia, Armin Laschet, as its new leader.

But opinion polls indicate that Soeder, who proudly displays his Star Trek mug during interviews and has more than 250,000 followers on Instagram and Twitter, is a more popular choice across party lines than Laschet in September's national election.

Laschet recently questioned the continued strict lockdown in Germany, warning of the harm it's causing to business. Days later, Soeder told party supporters that they would only win “Merkel votes with Merkel policies” — a clear warning to those who feel it’s time to break with her cautious course.

Soeder said he and his 60-year-old rival will focus on managing the pandemic for now and then examine the outcome of two state elections next month.

A drop in support for the conservatives would be regarded as a liability for Laschet and could see party lawmakers shift support to his Bavarian rival.

Deininger, his biographer, said Soeder relishes political duels. "But he doesn’t enter into a battle unless he knows he can win. Markus Soeder is a safety fanatic.”

Soeder himself stressed that he and Laschet “will sit down together and then make a proposal,” but made clear that he thinks there's still all to play for.

Normally the bigger branch of the party would pick the candidate for chancellorship in the Sept. 26 election, he acknowledged. "But let’s see what happens.”