Beaumont heads into 2nd term with rugby 'at a crossroads' 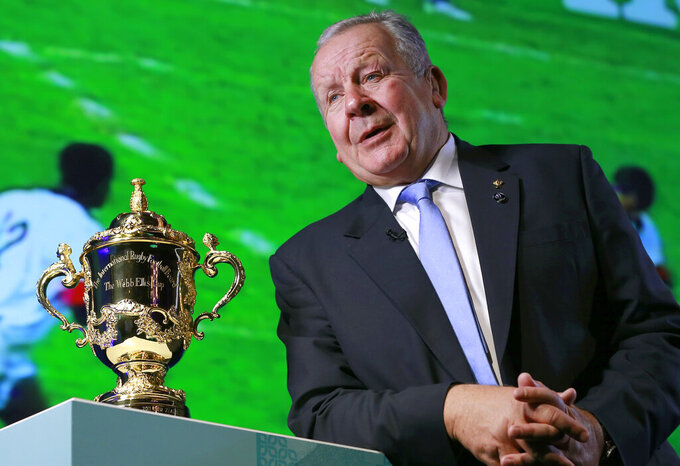 FILE - In this Thursday, Nov. 2, 2017 file photo, World Rugby Chairman Bill Beaumont speaks beside the Webb Ellis Cup during an interview before the match schedule announcement for the 2019 Rugby World Cup in Tokyo. Bill Beaumont and Agustin Pichot are vying to become chairman of World Rugby amid trying times for the sport because of the coronavirus outbreak and the growing discussion about a global calendar to unify the international game. (AP Photo/Shizuo Kambayashi, File)

Confronting and managing an unprecedented financial crisis. Uniting the northern and southern hemispheres in one global calendar. Maintaining the growth of the women’s and sevens games.

All while not even knowing exactly when rugby can return following the coronavirus outbreak.

Bill Beaumont has quite the job on his hands after getting re-elected as chairman of World Rugby — the most powerful position in the sport.

“It’s ‘roll your sleeves up’ time,” Beaumont said Sunday as he laid out his hopes, plans and concerns heading into his second four-year term in charge of the global governing body after beating Agustin Pichot in the election.

Beaumont, a popular, avuncular figure who was England captain in the 1980s, discussed a range of subjects and challenges facing rugby in the short and medium term. He freely acknowledged, however, that rugby remains at the mercy of the coronavirus.

Like almost every other sport, rugby has been shut down since the middle of March because of the outbreak. The nature of the game — there is arguably more contact in rugby than in any other sport — makes it even tougher to know when it will be ready to resume.

All are money-spinners for a sport so reliant on revenue from the international game. That’s not even counting the club game. New Zealand forecasts a 70% drop in revenue, the Australians are facing a black hole of more than $70 million, and English rugby could take an even bigger financial hit. World Rugby has delivered a relief fund of approximately $100 million to assist unions through to the end of 2020, but Beaumont accepts that “probably is not enough.”

“There is no magic money tree,” Beaumont said. “If we haven’t had been very fortunate to run a very successful Rugby World Cup in Japan, then we would be facing a far bleaker outlook than we have at the moment.”

Beaumont hopes the cash injection can cover unions that are looking to replay postponed games later in 2020, though that isn’t assured and could clash with club fixtures. “We can move the international windows,” Beaumont said, when asked if international matches could even be rearranged for Christmas Day, “but it must be in consultation with our stakeholders — and that is clubs in Europe, in the north — so that we do have a consensus of opinion for the whole game, bearing in mind the pressure clubs and provinces are under.”

Beaumont says there is “an appetite” to revive the Nations League proposal that was abandoned less than a year ago because there was no consensus between the major unions on issues like the format and when it would take place. It is a competition, potentially backed by private finance worth $7.5 billion over 12 years, that would invigorate the sport and attract global interest. But problems persist over which countries would be involved and whether it would feature aspects like promotion and relegation.

“We are at a crossroads for the game,” Beaumont said. “And the one thing that has happened is there’s a real desire from both the north and south to reunite our game. And one thing I am good at is putting people together.”

He said he would push for the global league to be played in the international windows currently reserved for July and November, perhaps over a combined two-month window in October and November — “so that north goes south in one month and south goes north in the next month. It would leave the Six Nations as a “standalone competition” played in February and March as usual, which Beaumont has no intention of moving.

Beaumont added that the global league might not necessarily include all the Six Nations countries, and that there could be a “subsidiary competition that involves all the emerging nations.”

Beaumont questioned whether the state of the game was “fit for modern purposes” because there was “precious little room for smaller, skillful players.”

“We can’t just make it that it’s the domain for huge players,” Beaumont said of a sport that he claimed was played in 98% of the world. Further changes may therefore be brought in to achieve a greater balance in this respect. Beaumont added there had not been any discussions about rule changes in reaction to the coronavirus pandemic.

Beaumont insisted his plans to grow women’s rugby, which also involve a global competition with promotion and relegation, will not be derailed by the pandemic.

“I am challenging the World Rugby executive team and saying we have to find the money for it,” he said. “It is a commitment by us and hopefully we can get things up and running as soon as feasibly possible.”

Beaumont said there was a great demand on the top female players, especially with the Olympic Games being pushed back to 2021 — the year of the next Women’s World Cup in New Zealand. He added, though, that was no reason for delays to changes to the structure of the women’s game.

Beaumont plans to make major changes to eligibility rules, in particular giving players born in the Pacific islands the chance to feature for their native country even if they have already turned out for other international teams like New Zealand or England.

It would mean a review of “Regulation 8” and he wants that to take place immediately. Beaumont said it would the increase the pool of players available for Pacific island nations and “improve the competitiveness of a Rugby World Cup, without a doubt.”