Beginning to bloom: New York creaking back to economic life 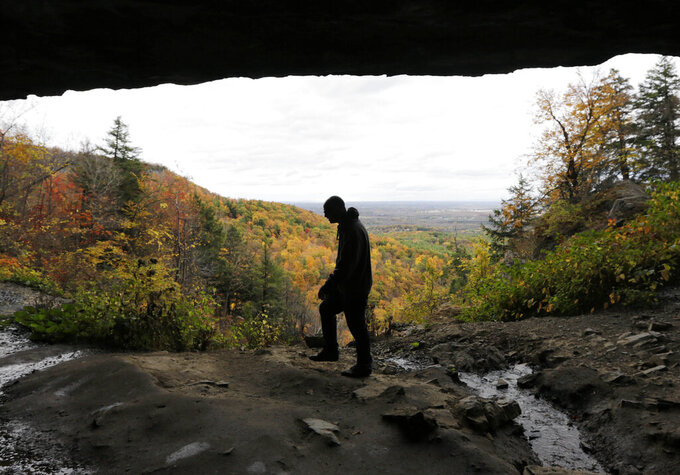 FILE- In this Oct. 18, 2013, file photo, Randy Thurston, of San Jose, Calif., takes in the fall foliage and the view of the Mohawk Valley while hiking with family and friends along the Indian Ladder Trail at Thacher State Park in Voorheesville, N.Y. Gov. Andrew Cuomo on Monday, May 11, 2020, gave the green light to several regions of the state not as severely affected by the outbreak to gradually re-start their economies once the latest stay-at-home order expires Friday. The Southern Tier, Mohawk Valley and the Finger Lakes have met all seven benchmarks for opening some business activity and need to work out some logistical details by the end of the week, Cuomo said. The North Country, which includes Essex County, is close behind. (AP Photo/Mike Groll, File) 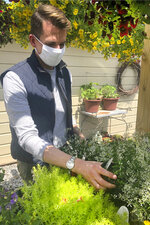 SCHOHARIE, N.Y. (AP) — Idled contractors girded for long-awaited jobs and shoppers browsed spring flowers -- though masks made stopping to smell the roses a problem -- as New York state began slowly restarting its economy Friday in areas spared the brunt of the coronavirus pandemic.

Smaller cities and rural regions in the middle of the state far from New York City, still gripped by the pandemic — are being allowed to open first, but gradually — industry by industry.

The first wave of businesses includes retail — though only for curbside or in-store pickup — along with businesses and industries like construction, manufacturing and nurseries.

In rural Schoharie, customers wearing face masks walked through colorful displays of geraniums and petunias outside the Apple Barrel Country Store and Cafe.

Martha Schebaum was happy to be shopping for blooms, even if the new rules took some getting used to.

“You can’t really get close to people. You have to pay attention to where everybody is, where you are, what you’re doing, what you’re touching," she said. “But you also want to help people out and do your part.”

Apple Barrel had already been offering takeout orders at its cafe. For Friday, it added designated entry and exits for customers who went inside to pay as it geared up its nursery business. No contact was allowed between staff and customers.

“Typically, you might greet customers with a hug or some sort of contact. You can’t do that now,” said co-owner Joshua Loden. "So it’s a lot of air hugs and smiling underneath our masks,” he said. “Like this entire pandemic, we’ve just been taking it in stride as best we can.”

In the largely rural Mohawk Valley, DANVANN Construction & Development geared up for an excavation job Monday at a lake on the southern edge of the huge Adirondack Park.

“I’ve been lounging around the house a lot, and I’m ready to get busy,” said employee Justin Brown. “I’d rather be working.”

Job site rules will be different next week, with workers keeping their hands disinfected and their faces covered, said company owner Dan Roth, who has been paying his four idled employees.

They'll also “have to stay 6 feet away from each other as best as you possibly can," he said.

The administration of Gov. Andrew Cuomo, a Democrat, divided the state into 10 regions that will reopen on different timetables. Restrictions can’t be eased until a region meets seven benchmarks demonstrating that COVID-19 deaths and hospitalizations are down and that there are enough hospital beds if the outbreak flares up again. Each region must have a program of testing and contact tracing.

The five regions of New York that opened Friday cover a wide strip down the middle of the state. Excluded are New York City, Long Island and the Hudson Valley on the state's east side, and the Buffalo region to the west.

But it's a soft opening.

A lot of manufacturing, construction and retail deemed essential has continued in New York during the restrictions. And curbside retail pickup has been available for food, wine and some other goods.

In Ithaca, signs went up Friday marking places downtown where retailers without parking spots could deliver goods, including one near the Commons, a pedestrian mall.

“We have been frantically working with our community here to make sure this can happen,” said Gary Ferguson, executive director of the Downtown Ithaca Alliance. “This is one step in the right direction.”

If new COVID-19 cases remain under control during the initial reopening, regions can open more types of businesses in a couple of weeks.

The next phase will include office jobs like professional services and insurance, as well as retail. Restaurants are included in the phase after that, and then finally arts, entertainment, recreation and education.

Businesses must come up with a plan outlining how they will prevent the spread of COVID-19, with requirements for providing face coverings and “social distancing markers” in common areas.

Along with the regional reopenings, Cuomo is relaxing other restrictions statewide. Warm weather gardening and landscaping businesses got permission to restart, as did a niche industry previously relegated to nostalgia but now an outlet for cooped-up families — drive-in theaters

The Four Brothers Drive-In Theater near the Connecticut border was opening for the season Friday with “Trolls World Tour” and “Birds of Prey."

“Our only concern is making sure we can control the crowd," said manager John Stefanopoulos. “And we actually hired some police to come in and direct traffic.”