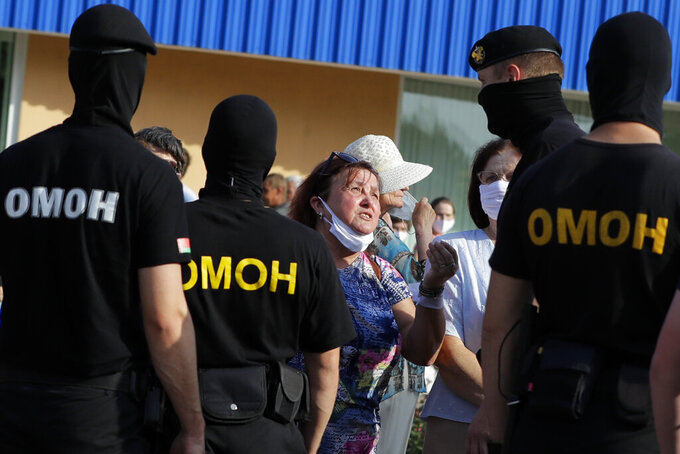 A woman argues with police as they block protesters , to prevent a rally in support opposition candidate Sviatlana Tsikhanouskaya ahead of Sunday's election in Slutsk, Belarus, Tuesday, Aug. 4, 2020. Belarusian police on Tuesday abruptly banned Tsikhanouskaya's previously approved rally in the city of Slutsk, about 100 kilometers (about 60 miles) south of Minsk, under the pretext of road repairs. Officers dispersed several hundred people who had gathered for the rally and detained at least 20 of them, according to Belarusian human rights organization Viasna. (AP Photo/Sergei Grits) 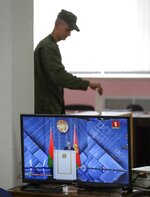 MINSK, Belarus (AP) — Belarus's authoritarian president vowed to maintain a close alliance with Russia even as he blasted the country Tuesday for sending in military contractors with allegedly nefarious purposes as he campaigns to win a sixth term in office in a weekend election.

In a state-of-the-nation address ahead of Sunday's election, Belarusian President Alexander Lukashenko said the partnership between the neighboring countries reflects historic ties.

“Russia has always been and will remain our close ally, irrespective of who takes power in Belarus or Russia,” Lukashenko said.

The pledge contrasts with Lukashenko's diatribes against Russia following the arrest of 33 Russian contractors in Belarus last week on charges of planning to stage mass riots. Moscow has dismissed the accusations, saying the contractors were heading to another country and stayed in Belarus after missing a connecting flight at the Minsk airport.

While he spoke of preserving warm relations with Moscow, Lukashenko stood his ground on the arrested contractors, dismissing the Kremlin's explanations as lies. He asserted the arrested individuals told investigators they were sent to Belarus and told to wait for further orders.

He alleged that another group of “militants” had been sent to southern Belarus, adding that “we will have to run through the forests to catch them, but we will get them all.” He provided no further details.

Lukashenko warned Moscow against trying to stoke tensions in the country he has led for 26 years, saying that instability could spread across the border and engulf Russia.

“It will explode in such a way that it would reverberate all the way to Vladivostok,” he said, referring to Russia's far eastern port city.

In Moscow, Russian Foreign Ministry spokeswoman Maria Zakharova dismissed the Belarusian accusations as a “theatrical performance” but added that the close ties between the two nations are rooted in history and based on pragmatic cooperation.

During his five terms as president of Belarus, Lukashenko has relied on cheap Russian energy and other subsidies and loans worth billions of dollars to shore up the Soviet-style economy in the nation of 9.5 million people. But at the same time, he has engaged in fierce economic arguments with the Kremlin, resisting Russian attempts to take control over Belarus's economic assets.

Russia this year has sharply scaled down its subsidies, saying Belarus needs to accept closer economic integration if it wants to receive Russian energy at a steep discount. Lukashenko has described the move as part of Moscow's efforts to subdue its neighbor.

Lukashenko obliquely referred to those arguments in his state-of-the-nation speech, lamenting that “Russia has shifted from brotherly to partner-like relations with us.”

But he argued that Moscow needs warm relations with its neighbor to the west.

“Russia fears losing us because it has no really close allies left except us,” he said. “And the West has shown increasing interest in us.”

Throughout his presidency, Lukashenko has sought to scare the Kremlin with the prospect of turning to the West. The tactics have worked to some extent, even though Lukashenko has earned the nickname of “Europe's last dictator” in the West for his authoritarian ways.

The 65-year-old former state farm director has stifled dissent and independent media and extended his rule through votes the West has seen as rigged.

Early balloting began Tuesday in Belarus ahead of Sunday’s presidential election, which the opposition sees as fertile ground for vote-rigging.

This time, the Belarusian leader has faced the toughest challenge yet from the opposition, amid public fatigue with his rule and fallout from the coronavirus pandemic. Sviatlana Tsikhanouskaya, the wife of a jailed opposition blogger, has unified fragmented opposition groups and attracted tens of thousands to her campaign rallies.

On Tuesday, Belarusian police abruptly banned Tsikhanouskaya’s previously approved rallies in the cities of Slutsk and Soligorsk. They dispersed hundreds of people who had gathered for the rallies and detained about 30 people in total, according to Belarusian human rights organization Viasna.

The police actions marked the first crackdown on a sanctioned Tsikhanouskaya campaign rally and appear to signal a toughening of the government authorities' stance in the days before the election.

Belarusian authorities have detained more than 1,000 participants during protests since the start of the presidential campaign.

In his speech, Lukashenko pointed to alleged plans to organize a “massacre” in Minsk — again giving no details — and sternly warned opposition supporters against holding unsanctioned protests.

“The response will be instant and the sanctions will be harsh,” he said.