Beleaguered Armenian PM stays away from church on Christmas 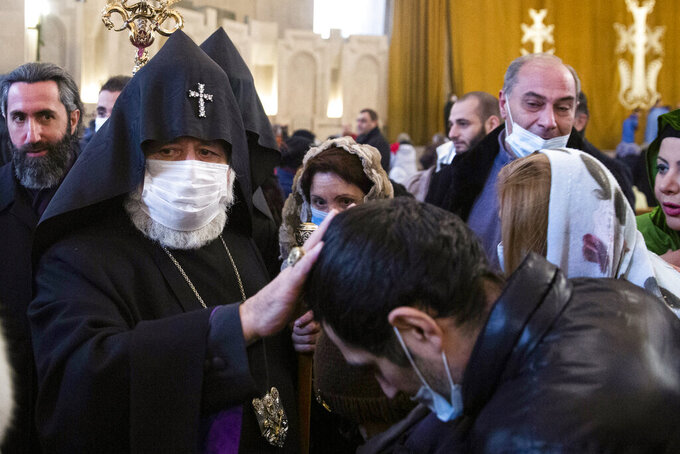 Armenian Catholicos Karekin II wearing a face mask to protect against coronavirus, left, blesses a believer after the Christmas Mass in the Saint Gregory the Illuminator Cathedral in Yerevan, Armenia, Wednesday, Jan. 6, 2021. Armenia's prime minister, who is under harsh criticism from the country's dominant Orthodox Christian church in connection with the recent war with Azerbaijan, stayed away from Christmas services on Wednesday. Orthodox Christians celebrate Christmas on Jan. 7, in accordance with the Julian calendar. (Grigor Yepremyan/PAN Photo via AP)

YEREVAN, Armenia (AP) — Armenia’s prime minister, who is under harsh criticism from the country’s dominant Orthodox Christian church in connection with the recent war with Azerbaijan, stayed away from Christmas services on Wednesday.

Prime Minister Nikol Pashinyan was self-isolating due to the coronavirus pandemic, spokeswoman Mane Grigoryan said. Pashinyan contracted the virus in June, and it was not clear if he had been reinfected.

The prime minister has been widely denounced in Armenia for signing a November cease-fire agreement that ceded parts of the separatist Nagorno-Karabakh region and large swaths of surrounding territory to Azerbaijan. The areas had been under the control of ethnic Armenian forces for a quarter-century before full-scale fighting broke out in late September.

About 3,300 Armenian servicemen were killed in the war, and the territorial cessions forced thousands of Armenians to flee their homes. The cease-fire sparked weeks of demonstrations calling for Pashinyan's resignation. Armenian Apostolic Church head Catholicos Garegin II and other top clerics have called for him to step down.

Many Orthodox churches mark Jan. 7 as Christmas; the Armenian church observes both Christmas and Epiphany on Jan. 6.

During a service at St. Gregory the Illuminator Cathedral on Wednesday, Armenian church leader Garegin said, “In the face of a shaky peace and the threat of war, the necessary vigilance was not shown.”

He referred to Nagorno-Karabakh, using the region's Armenian name of Artsakh, in tragic terms.

“The loss of a significant part of Artsakh, the martyrdom of our hero-children, the pain and grief of tens of thousands of our Artsakh brothers and sisters who were forced to leave their homes, being homeless and in need, thousands of wounded and prisoners, missing Armenians have put our national life in the homeland and diaspora into an impenetrable, gloomy night.” Garegin said.

This story has been corrected to show that some Orthodox Churches observe Christmas on Jan. 7.