Belgian manhunt for soldier on terror-watch list goes on 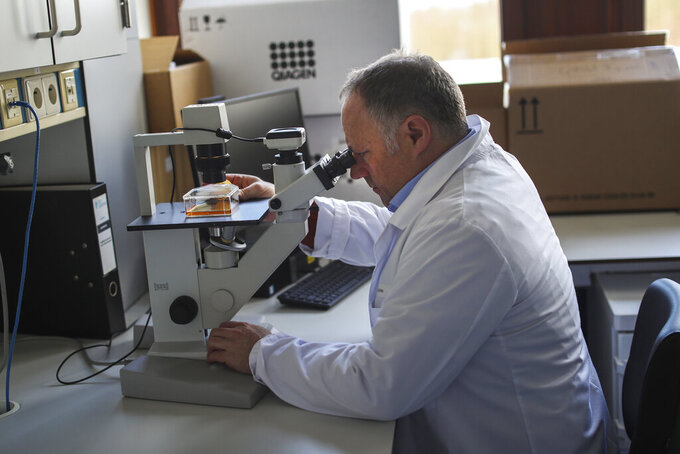 FILE - Belgian top virologist Marc Van Ranst looks into a microscope at his lab in Leuven, Belgium, Feb. 19, 2020. The hunt for an armed man who is on a Belgian terror watch list because of his extreme right sympathies and who had threatened several people, including top virologist Marc Van Ranst, entered a second day on Wednesday, May 19, 2021. Justice Minister Vincent Van Quickenborne described the man as an "acute threat" and is known for his extreme right sympathies. (AP Photo/Francisco Seco)

BRUSSELS (AP) — Belgian forces kept up their manhunt for an armed soldier who is on a terror watch list because of his extreme right sympathies while the government remained nonplussed over how a known threat to society could have had access to an array of heavy weapons.

The man had already threatened several people, including a top virologist, over the past few weeks, before he was able to leave an army camp with guns and four missile launchers.

“The real question is of course: how is this possible," asked Belgian Prime Minister Alexander De Croo, adding that the 46-year-old Jurgen Conings had been on the radar of the Coordination Unit for Threat Analysis, which assesses terror threats.

“Someone who has already made threats in the past — that this man within Defense has access to weapons and can even take those weapons with him,” De Croo said. “It is unacceptable.”

Meanwhile, authorities had recovered his car in northeastern Belgium. “Four missile launchers and ammunition were found in it,” Belgian federal prosecutor Wenke Roggen said. Throughout Wednesday authorities kept combing through the rugged terrain from Limburg province to Conings.

Authorities put out a search bulletin for the bald-shaven and tattooed Conings, who has been missing since late Monday. It warned the public not to approach Conings should they see him. It also asked Conings to turn himself in.

Justice Minister Vincent Van Quickenborne described the man as an “acute threat” known for his extreme right sympathies. Earlier this month, he had threatened several people, including Marc Van Ranst, one of the best-known virologists working on containing the COVID-19 pandemic.

In a Twitter message early Wednesday, Van Ranst said that “let one thing be clear: such threats do not make an impression on me.”

De Croo insisted that the defense forces and the security services come up with a proposal as soon as Thursday “to prevent such a thing from ever happening again.”