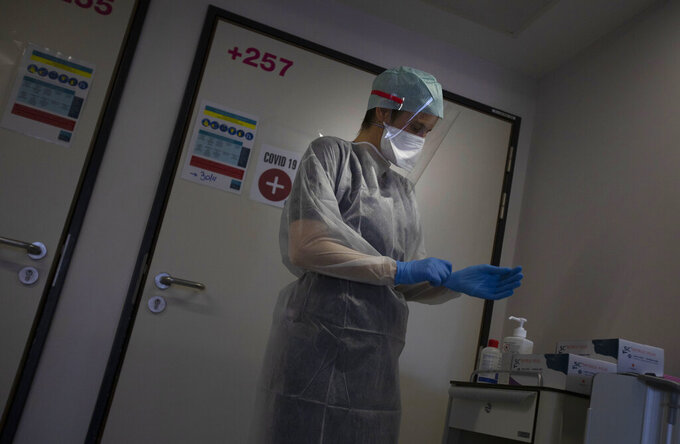 A Belgian Army medic suits up as she prepares to bring lunch to a patient with COVID-19 at the St. Michiel Hospital in Brussels, Tuesday, Nov. 24, 2020. The Belgian military has been called into several hospitals and care homes to alleviate the stress on healthcare personnel. (AP Photo/Virginia Mayo)

During the first wave of the pandemic during the spring and again now, care homes have been centers of infections and deaths. Over the past several weeks, staff levels in several homes have dropped to a minimum because infected nurses and others have had to quarantine after contracting the virus. The army has had to reinforce staff in some cases to manage essential care.

The overall neglect has been that bad that Amnesty International said last week that authorities “abandoned” thousands of elderly who died in nursing homes during the first spring surge of the pandemic. The majority of deaths occurred in care facilities during the first wave while that has switched to deaths in hospitals during the resurgence of the past two months.

While hospital staff were given a raise of around 6% in pay in recognition for their efforts, care home workers had to negotiate for months and until Tuesday to get a similar deal. Under Belgium’s regionalized government structure, Tuesday’s deal only affected the Dutch-speaking region of 6.6 million in the nation of 11.5 million.

“This is an unprecedented effort,” Flemish Minister President Jan Jambon said. In all, the region will spend about 410 million euros ($485 million) on pay increases while another 165 million euros ($195 million) will be spent on new staff and improvements in working conditions.

“This show of appreciation for the efforts made during the corona crisis were absolutely essential,” Mark Selleslach of the ACV union said. Measures based on the new funding should come in force next year.

One of the hardest-hit countries in Europe, Belgium has reported more than 15,600 deaths linked to the coronavirus. Overall in Belgium, 56% of deaths were in hospitals and 43 % were in nursing homes. Unlike many other nations, Belgium counts both confirmed COVID-19 cases and possible cases.