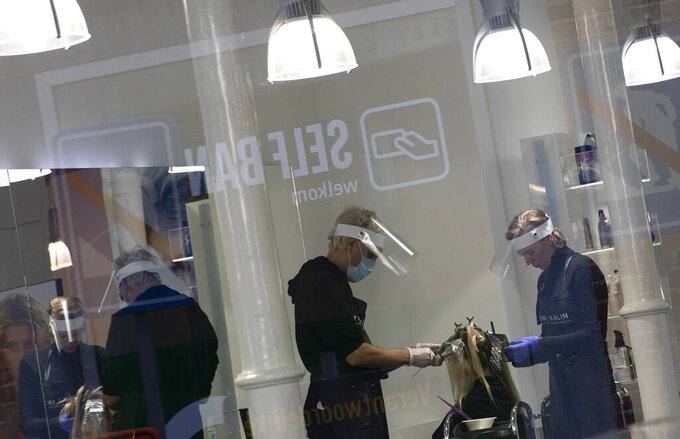 FILE - In this Monday, May 18, 2020 file photo, hairdressers work in a salon with face shields and masks during the partial lifting of coronavirus, COVID-19, lockdown regulations in Antwerp, Belgium. Belgian health authorities warned Friday, Feb. 26, 2021 that the number of coronavirus infections is rising as the government appeared set to prolong restrictions for several more weeks. (AP Photo/Virginia Mayo)

BRUSSELS (AP) — The Belgian government will not approve new COVID-19 relaxations for at least another week after health authorities warned Friday that the number of coronavirus infections is rising, probably due in part to the fast-spreading variant first found in Britain.

Until a few days ago, expectations were that Belgium would finally start scaling down major virus-control measures. But the uptick in new confirmed cases and especially an increase in hospital admissions persuaded Prime Minister Alexander De Croo to call for at least a one-week delay.

“The figures are rising everywhere," De Cross said. "It forces us to remain extremely careful, especially because we know there are such dangerous variants."

“We are calling a one-week timeout to avoid taking decisions that would waste our gains of the past weeks," he said.

Figures released Friday showed that 2,294 new confirmed cases are appearing on average daily in Belgium, a rise of 24% over the previous 7-day period. Hospital admissions were rising sharply over the past few days.

“The rise in the number of infections, despite the number of tests decreasing, is a sign that the virus is circulating more," said Steven Van Gucht, head of the viral diseases scientific service at the Belgian Scientific Institute of Public Health. "This could be due to the appearance of more contagious new variants, but also to less respect for restrictions.”

The institute estimated that more than half of new infections last week were caused by the variant first identified in the U.K., compared to 38% of cases over the previous seven days, Van Gucht said. Belgium has also recorded cases of virus variants first found in South Africa and Brazil, but numbers are small.

More than 22,000 people have now died of COVID-19 in Belgium, which has a population of 11.5 million. Restrictions have been in place almost permanently since the start of November, including obligatory mask-wearing outdoors, night-time curfews, and limits on certain shops opening. Non-essential travel is also banned.

Belgian officials have been exhorting people to respect the restrictions, as warmer weather approaches and the effect of vaccinations slowly begin to take hold, even as rights groups challenge some of the measures and amid concern over the possible misuse of health data.

Models on the spread of the disease made public earlier this week suggest that any easing in March could spark a “third wave” of infections.