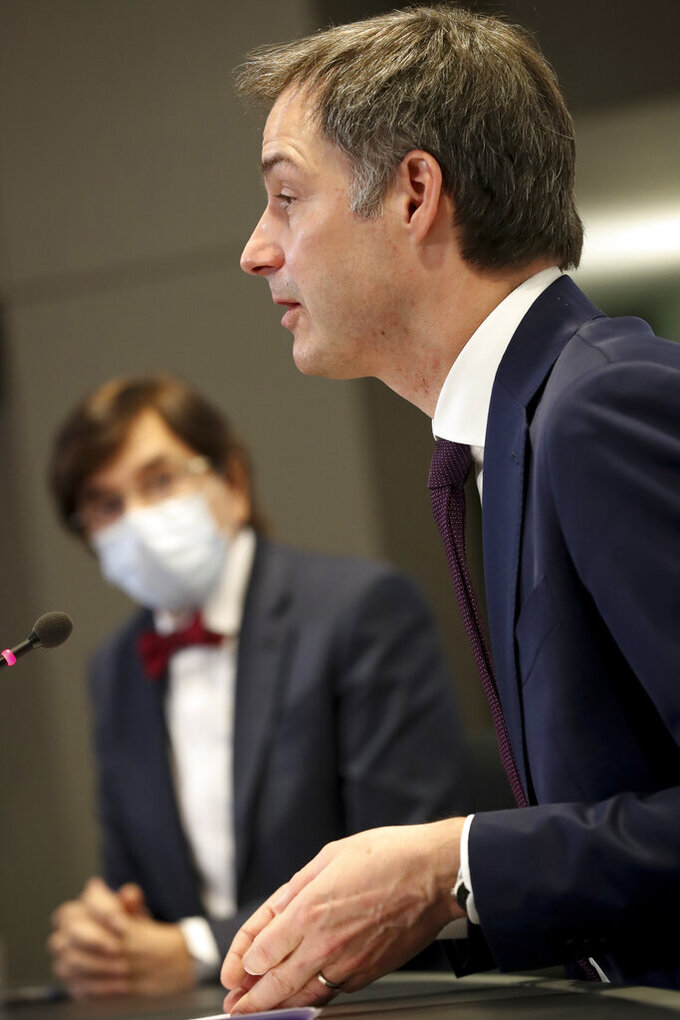 Belgium's Prime Minister Alexander De Croo, right, speaks during a media conference after a meeting of the consultative committee of government ministers in Brussels, Wednesday, March 24, 2021. Ministers met on Wednesday to discuss a possible tightening of COVID-19 measures as infections are once again on the rise. (Benoit Doppagne, Pool via AP)

BRUSSELS (AP) — Belgium is reintroducing a strict lockdown in response to a surge of new COVID-19 infections, with the government saying Wednesday that schools would close and residents would have limited access to nonessential businesses.

According to the government, COVID-19 infections are doubling every two weeks in Belgium now, with most clusters detected in schools and workplaces.

“It's difficult to take such a decision, and for many it will be a disappointment," De Croo said after an emergency meeting with regional leaders. “But I'm convinced that we are going to break this third wave."

Under the government's new order, schools and universities will no longer hold in-person classes beginning Monday, although kindergartens will remain open. Exams can still be held in the week before the Easter holidays and the government's goal is to resume in-person teaching on April 19 after the school break.

“The largest number of infections is in the 10-to-19 age group,” De Croo said, noting that children and young adults who show no or few COVID-19 symptoms can infect parents and grandparents, who become very sick and end up in the hospital.

A total of 22,763 people have died from virus-related causes in Belgium. About 1 million of its 11.5 million residents have received a first vaccine dose, and De Croo said the vaccination program in nursing homes has already helped reduce COVID-19 deaths.

“We need to return to a simple rule: Limit contacts," he said, adding that "the absolute priority is to reopen schools after Easter."

Under the new rules kicking off Saturday, nonessential shops can remain open but customers will need to book appointments to be allowed inside and occupancy is limited. Hairdressers, tattoo shops, beauty parlors and massage salons have to close again until April 25.

Olivier Mauen, spokesman for the independent businesses union, told broadcaster RTBF that he was angry over the new restrictions, which he says will hurt businesses and workers.

"Where are the numbers (to back this up)? It’s unacceptable,” he said.

Working from home remains mandatory and the maximum number of adults permitted to gather outdoors together is being reduced from 10 to four. Belgium's ban on nonessential travel outside the country will also remain in place over the Easter holidays with stepped up policing at borders.

“The goal is to spend a summer with a lighter spirit," De Croo said. “It is within our reach."