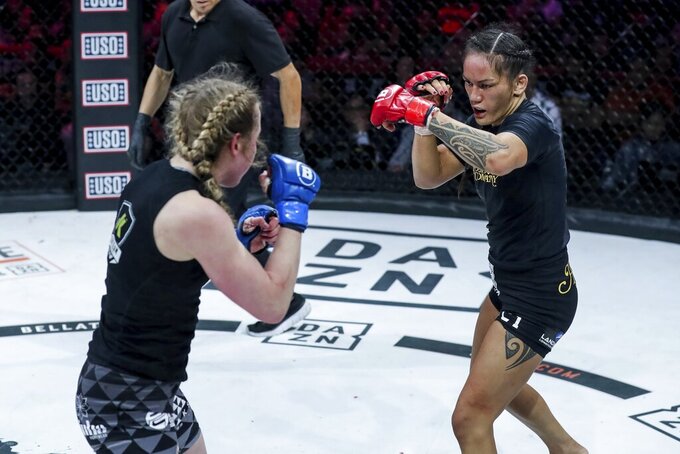 Ilima-Lei Macfarlane is somewhat out of her element in Connecticut this week. The Bellator flyweight champion is a Hawaii native and a San Diego-area resident who thrives in warmer climes than the subfreezing temperatures greeting her up north.

“You won’t hear any gripes for me about not being in Hawaii this time of year, because it’s fine,” she said this week. “As long as I’m getting a fight, I’m totally cool with it.”

She's getting a fight, all right: A full year after her last bout, Macfarlane (11-0) has the most daunting fight of her life Thursday night against powerhouse contender Juliana Velasquez (10-0) in perhaps the most intriguing matchup across mixed martial arts for December.

An unbeaten champion as a betting underdog in a title defense is a rarity in combat sports, but some oddsmakers are leaning against Macfarlane at the Mohegan Sun Casino in a card airing on CBS Sports Network and DAZN.

While the weather outside is less than Hawaiian, Macfarlane is right at home in another sense. The only flyweight champion in Bellator history is trying to accomplish another difficult task inside a cage at the close of an unprecedently tough year outside the cage.

Macfarlane has managed to stay on top of her competitive division ever since she won Bellator's flyweight tournament three full years ago, winning three of her four title defenses by stoppage. Velasquez looms as a major obstacle in an eventful year for the champ.

Her wedding was postponed due to the COVID-19 pandemic.

She joined her sister and another woman in a lawsuit against a former assistant basketball coach at Punahou School in Honolulu, alleging years of sexual abuse and manipulation.

Against that backdrop in 2020, the challenges of training for a 125-pound title fight during a pandemic seemed relatively manageable.

“There’s a lot of people who haven’t been able to fight, who aren’t getting paychecks,” Macfarlane said. “There’s a lot of businesses that have been forced to close down because of this year, so I’m honestly just grateful for that, despite it being very weird circumstances.”

Velasquez's power and size present stiff challenges for the 5-foot-5 Macfarlane, but she laughs at online chatter suggesting she has been avoiding Velasquez or been protected by Bellator. Macfarlane likely is better on the ground with jiu-jitsu than Velasquez, but a fight on the feet could be brutal for the smaller champion.

“Juliana is a lot more of an intimidating physical fighter than any of my former opponents,” Macfarlane said. “She’s bigger than me. She has a bit longer reach. Really aggressive and physical. I feel like my other (title defenses) were very strategic, but with her, it’s going to be a very physical fight.”

Macfarlane had her usual training partners and coaches in camp for the fight, but the pandemic created its own challenges. For starters, most gyms were supposed to be closed.

“Fortunately, we were considered an outdoor gym because we have warehouse doors,” Macfarlane said of her training camp. “So as long as we kept those up, then it was fine.”

Although the 30-year-old Macfarlane signed a multiyear contract extension with Bellator earlier this year, she has begun to think more about her long-term future. Her wedding in Jamaica was scuttled because nobody could travel to it, but she still thinks about starting a family soon.

For as long as she's still in the game, Macfarlane will focus on the goals and challenges that excite her, no matter where the cage may be.

“I feel like I’ve already made history quite a bit, and regardless of the outcome on Thursday, I’ll still be in the history books,” Macfarlane said. ”I want to take fun fights. I want to fight overseas. I want to fight in the ring in Saitama Arena (in Japan). I want to do a cross-promotional fight with RIZIN. I just feel a lot more relaxed — not taking my opponents lightly, but just like, I don’t have as much pressure as people think I have."