Berlin backtracks on plan to reopen schools after protests 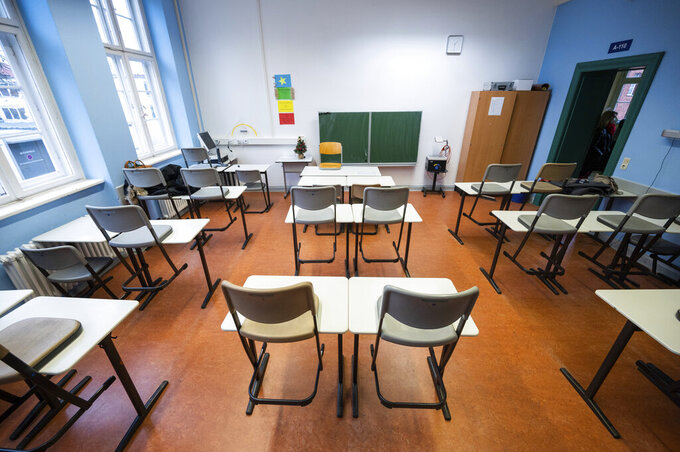 Chairs are placed on the desks in a classroom at the closed Schadow-Gymnasium high school in Berlin, Germany, Thursday, Jan. 7, 2021. Schools are due to reopen on Jan. 8 (Christophe Gateau/dpa via AP)

BERLIN (AP) — Authorities in Berlin backtracked Friday on plans to partially resume in-school teaching in the German capital next week despite a national lockdown, following protests from parents, teachers and the federal government.

An online petition launched this week gathered almost 40,000 signatures against the regional government’s proposal to start teaching some classes in school again from Monday.

Petitioners argued that the plan would undermine efforts to curb infections, which have remained persistently high in recent weeks.

The country’s disease control agency said overnight Friday that Germany recorded 31,849 newly confirmed cases and 1,188 deaths from COVID-19, the biggest single-day toll since the pandemic began. Figures tend to skew higher toward the end of the week.

Chancellor Angela Merkel had agreed Tuesday with the governors of Germany's 16 states to extend the existing lockdown and even tighten some measures further, including restricting meetings to just one household plus one other person.

But under German law, each state is responsible for implementing its own pandemic measures and often there are local differences.

Merkel's spokesman called Friday for all regions to move as one, especially in light of the new, more contagious variants of the virus that have emerged in Britain and South Africa.

“It's clear to all involved how important school is for children's lives,” Steffen Seibert told reporters in Berlin.

“But because of the high infection numbers there remains no other solution (...) but to suspend in-person teaching in schools for the time being," he said. “Anything else would have been difficult to justify in view of the health of students and teachers.”

“We are reacting to the widely expressed concerns at schools,” state education minister Sandra Scheeres said.

Only final-year students will return to school next week, she said. All others will continue with online learning until at least Jan. 25

Christoph Podewils, a father who had launched the petition, welcomed the decision.

“We have a very serious pandemic situation with lots of cases each day and many deaths," he said. "The decision to reopen schools was irresponsible."

“My concern was that the situation could fuel the pandemic by reopening schools," said Podewils.