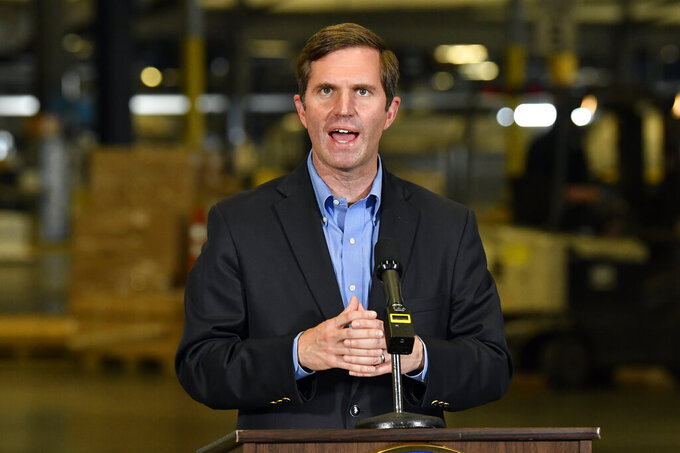 Nearly 1.85 million Kentuckians have received at least one dose of COVID-19 vaccine — slightly more than half the statewide population age 16 and older, the governor said at a news conference. With the state's vaccination rate slowing in recent weeks, several hundred thousand Kentuckians still need to receive the shots before achieving the inoculation threshold set by Beshear.

Once 2.5 million Kentuckians receive at least their first COVID-19 shot, Beshear has pledged to lift capacity and physical distancing restrictions for nearly all businesses, venues and events catering to 1,000 or fewer patrons. Anyone 16 or older is eligible to receive the vaccine in Kentucky.

Earlier Monday, the state's most powerful Republican, U.S. Senate Minority Leader Mitch McConnell, made another pitch for Kentuckians to get vaccinated.

“It is disturbing to see that vaccinations seem to be receding, as everybody kind of thinks it’s over," the senator added. "For whatever audience I have, I want to encourage everybody: finish the job.”

Beshear, a Democrat, acknowledged later Monday that fatigue has set in regarding mask-wearing and other virus-related restrictions. At his news conference, Beshear said “we're going to work on loosening" more rules as the state moves toward his 2.5 million vaccination target.

Beshear on Monday urged Kentuckians to “work really hard” in coming weeks to raise vaccination rates to “where we need to go.” He listed several vaccination sites that have large numbers of openings.

State Agriculture Commissioner Ryan Quarles, a Republican, called on the governor to set a full reopening date to “give our people certainty and the ability to plan for a responsible reopening.” Quarles noted that some Republican governors have already reopened their states.

“The longer Kentucky refuses to open up, the longer we will lose jobs and workers to other states,” Quarles wrote in an op-ed piece released Monday.

Quarles is considering a run for governor in 2023, when Beshear has said he will seek a second term. Quarles is among several Republicans weighing a potential challenge to Beshear.

The statewide rate of positive cases was 3.45%.