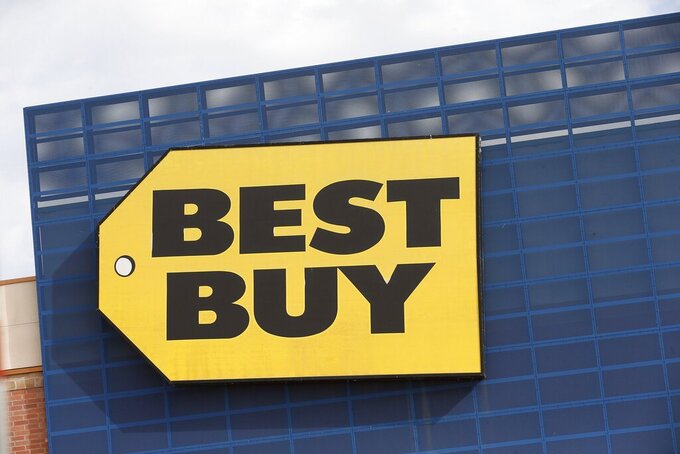 FILE - In this Aug. 27, 2019 file photo, the Best Buy logo is shown on a store in Richfield, Minn. On Tuesday, Nov. 24, 2020, Best Buy Co. reported fiscal third-quarter results that blew through analysts’ expectations as the nation’s largest consumer electronics retailer saw surging demand for items like home theater and appliances that help people learn, cook, work and connect in their homes during the pandemic. (AP Photo/Jim Mone)

The Richfield, Minnesota-based retailer, said that third-quarter profits rose 33% while sales were up 21%. Sales at stores opened at least a year rose 23%, while online sales in the U.S. surged 174%.

Still, shares fell 5% in Tuesday morning trading as Best Buy warned that sales could slow down during the current quarter as the number of virus cases surge.

“As we start the fourth quarter, the demand for the products and services we sell remains at elevated levels, but similar to last quarter, it continues to be difficult for us to predict how sustainable these trends will be," Matthew Bilunas, Best Buy's chief financial officer, told analysts during the call. “In fact, we are seeing COVID cases surge throughout the U.S. and Canada at a time of significant holiday volume through our stores, online and supply chain. “

Bilunas also noted other factors such as potential government stimulus, the risk of continued high employment and the availability of inventory like computers to match customer demand.

Best Buy joins big box stores like Walmart, Target, Home Depot and Lowe's in reporting strong fiscal results. Unlike mall-based stores and other businesses that sell non-essentials, big box retailers were allowed to stay open during the lockdown in the spring and have all seen their dominance increase as consumers focus on necessities and home-related activities.

Before the pandemic, Best Buy had expanded its services to such options as at-home consulting and same-day delivery. It also sped up its online shipping. But the pandemic has forced Best Buy to adjust its operations and launch new shopping experiences that provide more convenience and safety for customers.

Early fall, Best Buy began using 250 of its stores as fast-shipping hubs for online orders. It's now adding 90 more locations during the holiday period. It says its goal is to have all 340 stores ship more than 70% of its ship-from-store units during the holiday quarter. It's also testing new store formats as it transforms locations to fulfillment hubs.

For example, in four Minneapolis locations, Best Buy reduced its square footage for shopping to 15,000 square feet from an average of 27,000. The product assortment on the sales floor will still include the primary categories these locations featured before the remodel, but instead the focus will be on the most popular items, the retailer said. The remodels will result in increased space for staging product for in-store pickup and to help ship-from-store transactions, as well as provide the ability to stage inventory for items that may not be on the sales floor.

Best Buy reported fiscal third-quarter profit of $391 million, or $1.48 per share, compared with $293 million, or $1.10 per share, in the year-ago period. Earnings, adjusted for restructuring costs and amortization costs, were $2.06 per share.

The results exceeded Wall Street expectations. The average estimate of 11 analysts surveyed by Zacks Investment Research was for earnings of $1.76 per share.

Elements of this story was generated by Automated Insights (http://automatedinsights.com/ap) using data from Zacks Investment Research. Access a Zacks stock report on BBY at https://www.zacks.com/ap/BBY