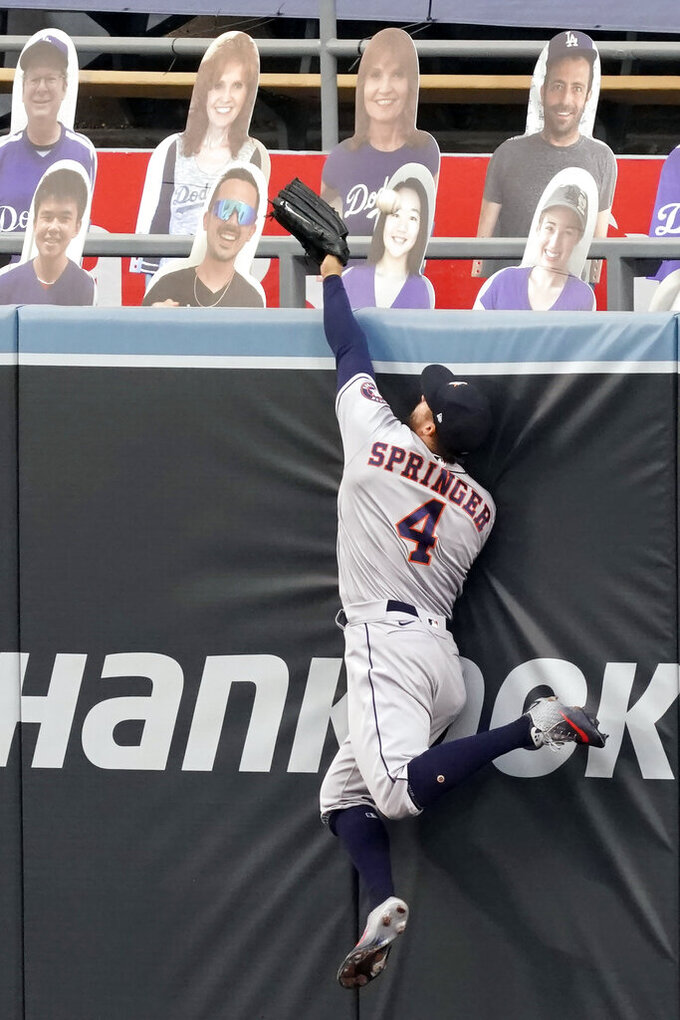 LOS ANGELES (AP) — The Dodgers gave the Astros a lot of different looks. They used eight pitchers in all, with the bullpen redeeming itself a night after a tough finish.

The Dodgers took three of four in this shortened season from the team that beat them in the 2017 World Series, after which the Astros’ cheating scandal was revealed. Even with fans banned because of the coronavrius pandemic, they made their feelings known.

For the second straight day, the Astros were bombarded with messages towed by planes over Dodger Stadium. “Steal This Sign Astros” read one. “Astros Cheated! Never Forget! Go Dodgers” and “Hey Astros Try Stealing This Sign!” read others.

Surely, Los Angeles fans were even more piqued after the Dodgers blew a three-run lead and closer Kenley Jansen was charged with five runs in the ninth without recording an out in a 7-5 loss on Saturday.

The bullpen redeemed itself Sunday, helping the Dodgers avoid their first three-game skid of the season.

Brusdar Graterol and seven relievers combined on a four-hitter. Graterol opened with an inning of one-hit ball, striking out three. Jansen retired the side in the ninth, setting down Carlos Correa, Josh Reddick and Martin Maldonado — each of whom burned him in the same inning a night earlier.

“I asked him how he felt and he was ready to go,” manager Dave Roberts said, adding that Jansen's “conviction, the execution was plus-plus across the board.”

Victor González (3-0) got the win with two scoreless innings. He allowed one hit and struck out two.

“This is the deepest, most talented ’pen by a full grade that we’ve ever had. Guys are having tremendous years and it’s a close group there,” Roberts said.

Taylor slugged a three-run homer into left field — his second in as many games — with two outs in the eighth, extending the lead to 8-1.

“They got all kinds of hits — bloopers, check swings, bunts, homers,” Astros manager Dusty Baker said. “They had it going in all departments.”

Kiké Hernández had a two-run single and Betts followed with his team-high 15th homer. Betts' blast hit off the top of the wall in right, narrowly eluding the outstretched glove of George Springer, who punched the air with his right arm in frustration.

Springer responded with a leadoff homer in the sixth. The Astros didn’t have more than one runner on until the seventh. Alex Wood allowed a single to Maldonado and hit Abraham Toro before getting the final two outs.

Seeing so many pitchers affected the Astros' timing at the plate.

The Dodgers led 1-0 on AJ Pollock's 10th homer with two outs in the first.

Zack Greinke (3-2) gave up five runs and eight hits — both season highs — in five innings of his second straight loss. He struck out three and walked none against his former team.

“You start to wonder if you’re actually doing good and what are you doing wrong,” Greinke said. “Had some soft hits, so maybe a little unlucky, but you’ve got to take some of the blame somewhere.”

Dodgers: RHP Dustin May tossed a 20-pitch bullpen using his entire mix. He could start Wednesday in San Diego. He took a line drive off his left foot at Arizona. ... RHP Joe Kelly (right shoulder inflammation) will throw a bullpen on the off day Monday and could be activated later in the week. ... 3B Justin Turner (strained left hamstring) did some work on the field, running bases and taking grounders at third.

Springer has hit safely in 11 of his last 12 games. During that span, he's batting .340 with two doubles, four homers and six RBIs.

Turner was recognized on the field by Roberts as the Dodgers' nominee for the Roberto Clemente Award. It honors the major leaguer who best represents the game through character, community involvement and philanthropy and is decided through fan voting.

Astros: RHP Jose Urquidy (0-1, 3.72 ERA) makes his third start Tuesday at Texas after missing most of the season following a bout with COVID-19.

Dodgers: Begin a three-game series at San Diego on Monday in a showdown between the NL West's top teams.