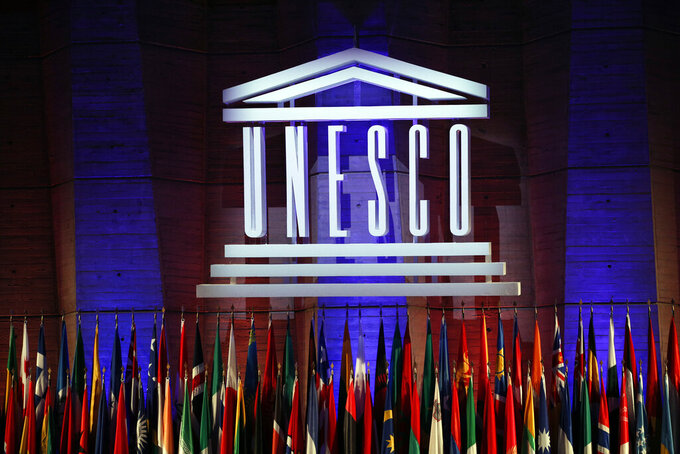 FILE - In this Nov.4, 2017 file photo, the logo of the United Nations Educational, Scientific and Cultural Organisation (UNESCO) is seen during the 39th session of the General Conference at the UNESCO headquarters in Paris. While the U.S. president is calling for suspending patents on COVID-19 vaccines, experts at UNESCO are quietly working on a more ambitious plan: a new global system for sharing scientific knowledge that would outlast the current pandemic. (AP Photo/Christophe Ena, File)

PARIS (AP) — While the U.S. president is calling for suspending patents on COVID-19 vaccines, experts at UNESCO are quietly working on a more ambitious plan: a new global system for sharing scientific knowledge that would outlast the current pandemic.

At a meeting that concluded Tuesday, diplomats and legal and technical experts from UNESCO'S member states tried to draw up global guidelines under a project called Open Science.

UNESCO’s specialists say the pandemic has shown that sharing sensitive research is possible: Chinese scientists sequenced and shared the genome of the then-new coronavirus in January 2020, allowing German researchers to then quickly devise a screening test shared around the world.

“The crisis put a spotlight on how scientific information is produced, shared, communicated,” said Ana Persic, chief of the science policy section at Paris-based UNESCO. “It is a paradigm shift for the scientific community.”

The Open Science talks aim to come up with a “soft law” by the end of this year that governments could use as a guide for setting science policies and systematically sharing data, software and research across borders, Persic said.

Suspending vaccine patents is more sensitive than genomes or testing protocols because of the huge investment and commercial concerns involved, Persic acknowledged. Discussions on the patent issue are centered at the World Trade Organization, not UNESCO, and they’re far from reaching consensus.

European leaders say lifting patent protections won’t solve the problem of getting shots into the arms of people in poorer countries. Instead, they are pushing for more immediate action, like urging the U.S. to export vaccine doses that have already been produced.

But Persic told The Associated Press that "in times of emergency or crisis, there might be a way of lifting those patents ... One can protect the data in a certain way, and still share it.”

In 2019, then-President Donald Trump pulled out of UNESCO, but U.S. diplomats are taking part in the Open Science talks as observers.

UNESCO Director General Audrey Azoulay said in a statement that lifting patent protection for coronavirus vaccines “could save millions of lives and serve as a blueprint for the future of scientific cooperation. COVID-19 does not respect borders. No country will be safe until the people of every country have access to the vaccine.”