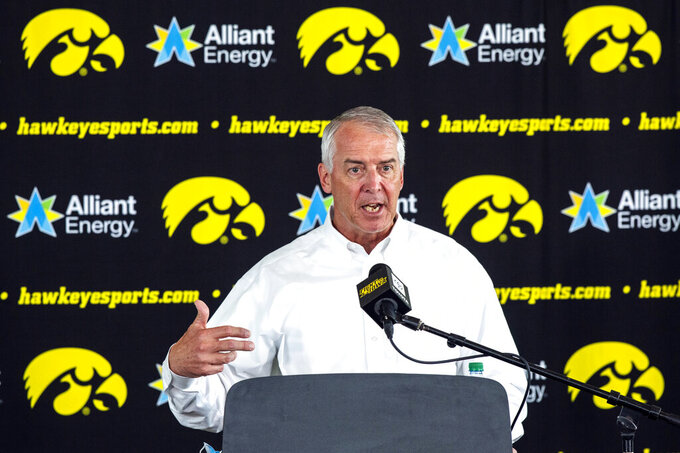 IOWA CITY, Iowa (AP) — Members of the University of Iowa women's swimming and diving team filed a legal complaint against the school Friday, arguing that a decision to eliminate their program violates a landmark gender equity law.

The complaint argues that Iowa is not offering equal opportunities for female students to participate in sports as required by Title IX, the 1972 law that bars sex-based discrimination in federally funded education programs.

The plaintiffs, including senior captain Sage Ohlensehlen and teammates Christina Kaufman, Alexa Puccini and Kelsey Drake, are asking a federal judge to stop their program's termination. In addition, their lawsuit requests class-action status on behalf of all female undergraduates who they say are legally entitled to additional sports opportunities.

The university issued a statement Friday rejecting the complaint's claims, noting that the program cuts will eliminate 20.7 scholarships for men and 14 for women.

“We are confident that the UI is in compliance with Title IX,” university general counsel Carroll Reasoner wrote to Jim Larew, the lawyer for the plaintiffs. She added that the cuts “will not be reversed based up on your demand.”

The complaint argues that Iowa was not in compliance with the law for years and should be barred from cutting any women's programs.

Barta blamed the cuts on a financial crisis stemming from the coronavirus pandemic. Current and former athletes and donors are lobbying Iowa to reverse course.

Barta and Iowa President Bruce Harreld have portrayed the decision as final and dismissed a fundraising campaign that quickly raised $1.65 million in pledges as woefully inadequate to sustain the sports.

The lawsuit argues that Barta's 14-year tenure as athletic director has been out of step with the school's history of leadership in women's athletics.

The lawsuit argues that since Barta began in 2006, the school has failed to offer any new programs for female students but has “attempted, on multiple fronts, to create public illusions of gender-parity for student athletes.”

Iowa has counted some male practice squad members on women's teams as opportunities for women in annual reports to the federal government, the lawsuit claims. In addition, the school has packed the women's rowing roster with up to 94 participants, far more than the national average, many of whom have no chance of competing outside of practice, it says.

Based on online rosters, women need up to 81 more opportunities to be equal with men at Iowa even after the four programs are eliminated, the lawsuit claims.

The lawsuit recounts a series of gender-related problems that have happened under Barta, the chairman of the College Football Playoff selection committee.

In 2017, a jury found that Barta discriminated against senior associate director Jane Meyer on the basis of her gender and sexual orientation.

Iowa later paid $6.5 million to settle with Meyer and her partner Tracey Griesbaum, the school's former successful women's field hockey coach whom Barta fired in 2014. They alleged Barta had a pattern of favoring men's sports such as football while mistreating female coaches and administrators.

In 2017, an investigation by the Office for Civil Rights of the U.S. Department of Education, found potential disparities in uniforms, facilities, academic tutoring, housing and dining and recruiting for female athletes. The two sides negotiated a resolution that called for Iowa to assess its compliance and “take proactive measures to resolve any deficiencies identified.”

The university said Friday that the review was closed last year with no violations.

This story has been corrected to reflect that women’s volleyball was added earlier, not in 2003 as the lawsuit erroneously claims.