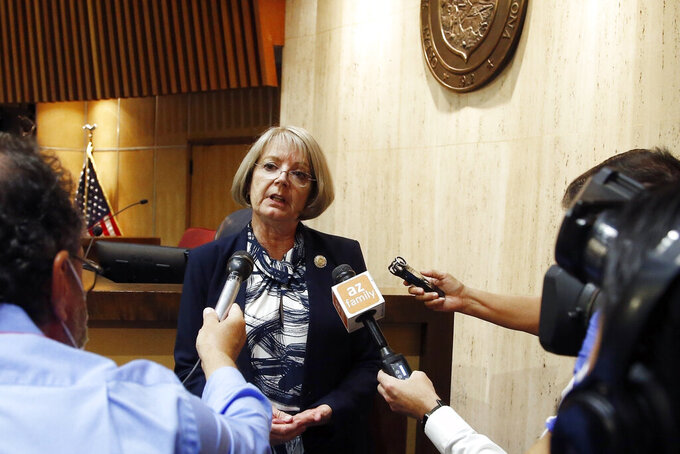 PHOENIX (AP) — The Arizona House on Monday failed to pass vital parts of a $12.8 billion state budget that contains a massive $1.9 billion income tax cut after one Republican joined all Democrats in opposing the measures, a key defeat for GOP House leaders who risked the vote knowing they lacked support.

Rep. David Cook's opposition to the size of the tax cuts had been known for days, but Republican House leaders hoped he would come around if they forced the vote.

Instead, the Globe Republican stood firm, and the measures went down during debate, a rare occurrence. Cook has repeatedly said he believes the tax cut is based on a false hope that state finances are solid when they have been beefed up by billions of federal coronavirus relief dollars and rely on unrealistic economic growth estimates.

Cook pointed to his consistent record of voting for tax cuts and said he believes the state can slash another $500 million to $600 million in income taxes beyond about $500 million already enacted this year. But he argued paying down more of the state's debt is a bigger priority, and he opposed a bailout for wealthy taxpayers who must pay a 3.5% surcharge voters approved in November to fund education.

“As a conservative Republican with a consistent conservative voting record, I believe we need not mirror the federal government and continue with the borrowing and debt,” Cook said. "Paying off our financial obligations as a state before spending more money is a Republican value I have encouraged my fellow lawmakers to consider before casting their vote."

“It’s a little north of 550,000 jobs that are supposed to be new in Arizona to pay for these tax cuts,” Cook said. “There were no numbers given. These are the concerns that I have for the state and the people of this state.

"Does that bother you?" he asked.

“Lots of things bother me. Cutting taxes does not bother me in the least," Toma responded.

The massive tax cut package, which proponents called the largest in state history, would have cut more than 25% of state income tax revenue after being fully phased in over the next two years. Democrats said the tax cut favored the rich — especially its provision capping taxes on the wealthy at 4.5% as a workaround to a new 3.5% tax surcharge on high earning Arizonans that was approved by voters in November.

The defeat of the main tax measures in the 11-bill package leaves GOP House leaders with no clear path forward on a budget that must pass by the end of the month to keep state government operating in the budget year that starts July 1.

House leaders made a raft of changes to the negotiated plan to try to gain support from fiscal hawks who worried it contained too much spending. They also larded it with policy issues conservatives wanted that either failed as separate bills or never were in proposed legislation.

They included a ban on “critical race theory” training by government agencies or schoolteachers, a ban on school districts requiring students to wear face masks to prevent the spread of the coronavirus, and a ban on any government entity from requiring “vaccine passports.”

They also boosted the percentage of the state income tax distributed to cities from 15% to 17% in an effort to win backing from municipalities concerned that the $1.9 billion income tax cut would force them to scale back services like police and fire.

Republican House Speaker Rusty Bowers said in an interview that he would continue to work with Cook to win his backing, while complaining about Cook's large list of demands, some of which he addressed in the proposed changes released Monday.

But Cook's major problem, that the tax cut is too large, may be a bridge too far, Bowers said.

“I’m willing to look at the tax cut and how we can do it,” Bowers said. But "if I reduce that cut, I’ll lose five members, and they’re pretty entrenched.

Cook was angry that leadership forced a vote when they knew they lacked support, which came as his ranch near Globe in the mountains southeast of Phoenix was ordered evacuated because of a wildfire.

Bowers and Toma both said Friday they were pushing a vote to try to get members on the record against the big tax cuts — in hopes they could shame recalcitrant Republicans to vote for the package.

Instead, after two bills containing the tax cuts were defeated, they adjourned until Thursday, when the Senate is set to return.

The biggest winners in the tax cut plan would be the wealthy, who would be mainly shielded from the 3.5% surcharge in Proposition 208 and get the biggest benefits from a flat-tax proposal that lowers rates to 2.5%. The current top tax rate is 4.5% for high-earning Arizonans, plus the new 3.5% surcharge. Couples earning over $500,000 a year would pay a maximum of 4.5% under the proposal instead of 8% foreseen under Proposition 208.

Cook and Republican Sen. Paul Boyer have been outspoken in their concern that the tax cut will hurt cities. Both also worried about debt and that the permanence of the cuts would put the state in dire financial straights if there is another recession.

An Associated Press analysis shows the state is on the hook for $6.6 billion in pension debt and $7.6 billion in bonds, lease-purchases and payment deferrals. That includes $930 million owed to schools from a budget gimmick used following the Great Recession that delayed nearly $1 billion in payments.

The initial budget proposal that paid down school debt by just $30 million got a $35 million boost as part of the sweetener revealed Monday.