Biden Cabinet near complete but hundreds of jobs still open 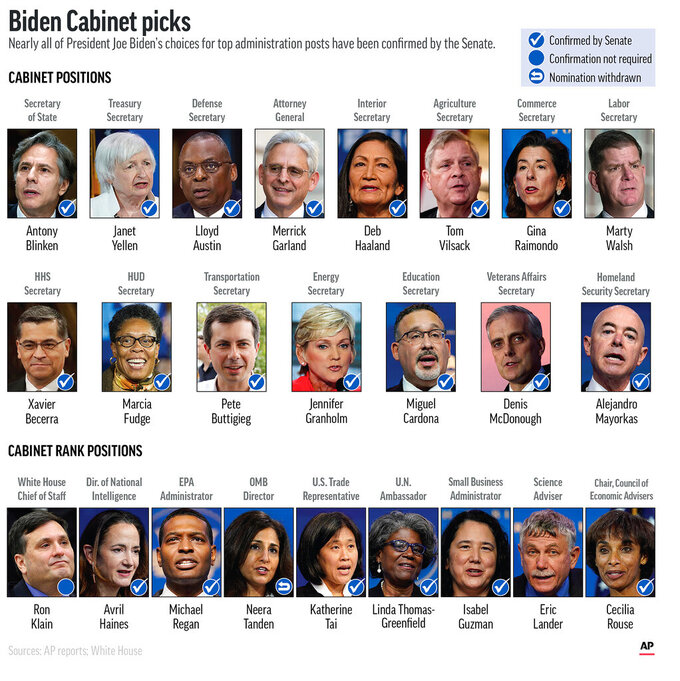 WASHINGTON (AP) — President Joe Biden’s Cabinet is nearly complete with the confirmation of Labor Secretary Marty Walsh. But the work of building his administration is just beginning, as Biden has hundreds of key presidential appointments to make to fill out the federal government.

The process of building out a government, according to Paul Light, a senior fellow at the Brookings Institution, is “nasty, brutish, and not at all short.”

Biden has about 1,250 federal positions that require Senate confirmation, ranging from the head of the obscure Railroad Retirement Board to more urgent department positions such as assistant and deputy secretaries. Of the 790 being tracked by the Partnership for Public Service, a nonpartisan good-government group, 23 appointees have been confirmed by the Senate, 39 are being considered by the Senate, and 466 positions have no named nominee.

According to Max Stier, president and CEO of the partnership, filling out those key posts will likely take the better part of the year — and those vacancies have real-world consequences.

Many agencies, he said, have various sections "that have leadership that really runs that specific component,” Stier said.

Aside from Walsh, who was confirmed Monday by a 68-29 vote, there are a few finishing touches for his Cabinet-level appointees. The Senate has yet to confirm Eric Lander as Biden’s top science adviser, and the White House still hasn’t named anyone to head his Budget office, after Neera Tanden withdrew her nomination amid controversy. The White House is facing pressure from lawmakers on Capitol Hill to name Shalanda Young, the current nominee for deputy budget director, to the top role.

Senate Majority Leader Chuck Schumer has set up confirmation votes this week for Young, along with Vivek Murthy for surgeon general and Rachel Leland Levine for assistant secretary of Health and Human Services, among others, before the Senate adjourns for recess until mid-April.

Beneath the Cabinet heads that have been confirmed are numerous sub-departments that remain leaderless. Many have only acting heads in place even as the administration faces a number of pressing situations in addition to the coronavirus pandemic.

Recent crimes against Asian Americans have sparked fresh debate over the nation’s gun laws, but Biden has yet to nominate anyone to head the Bureau of Alcohol, Tobacco and Firearms. And the wave of migrants at the border is underscoring major challenges in enforcing immigration and asylum laws. Biden hasn’t nominated anyone to head the three key agencies in charge of much of their implementation: Customs and Border Protection; U.S. Citizenship and Immigration Services; and Immigration and Customs Enforcement.

Asked last week about those vacancies, White House press secretary Jen Psaki said they were “all important agencies” but offered no timeline for naming nominees.

There are also key vacancies at the Department of Health and Human Services that will play a significant role in addressing the coronavirus pandemic. Biden has named Chiquita Brooks-LaSure to be the administrator for the Centers for Medicare and Medicaid Services, but it’s unclear who he’ll choose to head the Food and Drug Administration, which plays an important role in approving vaccines and treatments for the pandemic.

“The federal government is not so much headless as neck-less. The sub-Cabinet — the associates, the assistants, the deputy secretaries, and then all of the political appointees they bring with them — those are the nerve endings, that’s the spinal cord down into the guts of the hierarchy,” said Light.

Department heads "do not make things happen by fiat. They have to work through the channels that exist, and a vacancy is always a threat to effective delivery.”

Senate panels are also holding a handful of confirmation hearings this week as lawmakers turn their focus to issues such as the cost of prescription drugs, gun violence and the state of the 2020 Census.

Committees are holding confirmation hearings for Samantha Power to serve as administrator of the U.S. Agency for International Development, Cynthia Minette Marten to be deputy secretary of Education, and Deanne Bennett Criswell to be the next FEMA administrator. A panel is also considering the nomination of Admiral John C. Aquilino to be commander of the Defense Department’s United States Indo-Pacific Command.

A panel will also vote on advancing the nomination of Polly Ellen Trottenberg to be deputy secretary of transportation.

Overall, the pace is slower than that under Presidents George W. Bush and Bill Clinton, as the Biden team was hamstrung from the start because of what they said was a lack of cooperation from Trump administration officials throughout the transition.

Senate Democrats did not win a majority of seats in the chamber until the Jan. 5 Georgia runoff elections, and then it took nearly a month for Democratic and Republican leadership to agree on a resolution governing the organization of the chamber, which further delayed committee work.

Biden has "caught up a little bit, but he’s still a long way from the finish line,” Light said.

He warned that some of the vacancies could create a political problem for Biden, because “he needs to show that he can run this bizarre and overlayered government to the public’s benefit.”

“Any major delays or a slip of some kind, where the paper doesn’t get signed or the check doesn’t get out the door on time, that’s the worst case for him,” Light said.

And even as the Biden administration moves through picking nominees, there's no guarantee they'll all receive a smooth confirmation. Colin Kahl, who was nominated for undersecretary of defense for policy and Julie Su for deputy labor secretary, have faced opposition from Republicans. And some of the deputies have become political footballs for Republicans looking to score concessions from the Biden administration.

Cruz continues to hold up Biden’s nominee for deputy secretary of state, Wendy Sherman, until sanctions are imposed.